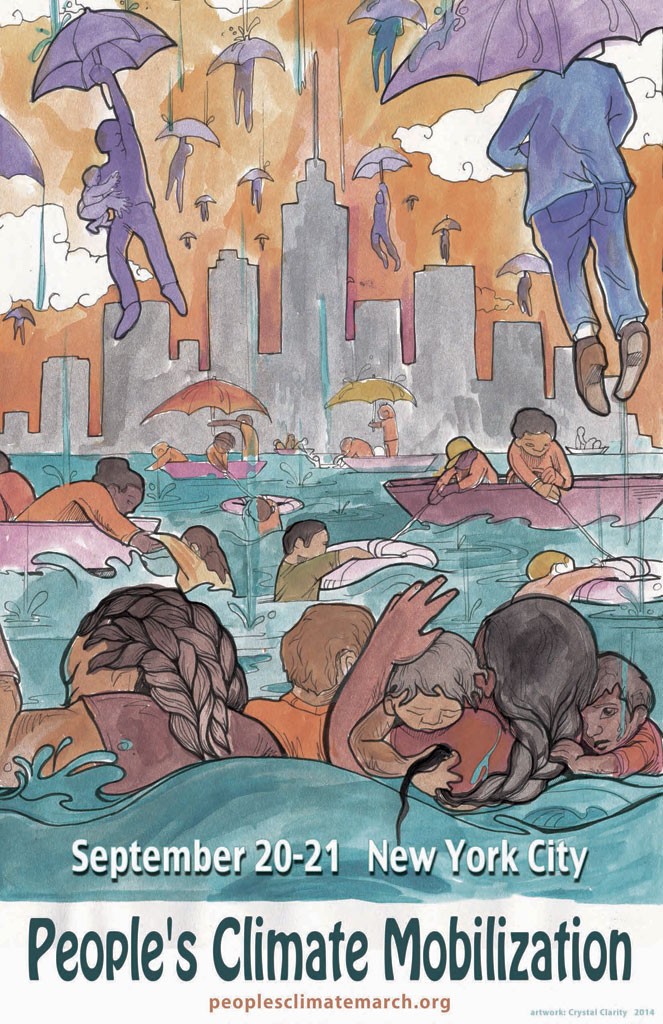 Organizers expect more than 1,000 Vermonters to join 100,000 marchers on Sunday, September 21, in what's being billed as the biggest-ever action on climate change. Traveling to New York City by bus, train, van and even bike, members of the Green Mountain contingent will troop through midtown Manhattan two days prior to a global climate summit at United Nations headquarters.

In keeping with its green ethos, Vermont has long been a hotbed for agitation focused on global warming. It was 25 years ago that Bill McKibben, now a Middlebury College scholar, wrote The End of Nature, the first book on climate change aimed at a general audience. In 2006, McKibben led a five-day walk from Ripton to Burlington that helped spread awareness in Vermont and beyond about the escalating threat to the planet from greenhouse gases produced by burning fossil fuels.

The 53-year-old author-activist-academic was at it again last week, warning a standing-room audience at St. Stephen's Church in Middlebury that "we're running out of time" to prevent climate-change catastrophes. McKibben noted that carbon dioxide readings for Earth's atmosphere rose last year by 2.9 parts per million, which he termed "a truly dire accelerated figure." The jump brought the CO2 load to nearly 400 parts per million — as compared to the 350 ppm that climate scientists regard as a safe level. Referencing that benchmark number, McKibben chose "350.org" as the name for the movement advocating a transition away from dirty energy sources.

In anticipation of the upcoming march, "Students were asking for a roundup of the latest climate news and politics," McKibben explained in a press release announcing the "Climate Conversation" event, which also served as a recruiting and organizing initiative for the demonstration in New York next weekend. "We decided we wanted to involve the whole community, since so many local questions, like the gas pipeline, involve the evolving science of climate."

McKibben was referring to the Vermont Gas Systems pipeline extension planned for Addison County. It's supported by major local businesses, as well as by Middlebury College, and opposed by climate activists who argue that the world cannot safely accommodate additional fossil-fuel facilities.

The latest U.N. report on climate change warns that Earth's surface temperature is likely to rise in coming decades by more than 2 degrees Celsius — or 3.6 degrees Fahrenheit. Such an increase could have severe consequences for the global environment, Middlebury College physicist Rich Wolfson warned at St. Stephen's. The Arctic Ocean is expected to lose all of its ice for part of the year, Wolfson noted, hoisting and theatrically dropping the 2,000-page report by the U.N. Intergovernmental Panel on Climate Change. "The oceans are continuing to acidify," threatening sea creatures and coral, Wolfson said, paraphrasing the U.N. report. It also predicts droughts will become more frequent in some regions even as precipitation increases in others.

A University of Vermont study issued on September 12 localizes the projected impacts of these global climate trends. The Lake Champlain basin will grow hotter and hotter as the century progresses, according to the forecast offered by UVM engineering graduate student Justin Guilbert, with support from plant biology professor Brian Beckage.

Average temperatures will climb more than 8 degrees Fahrenheit by the end of the 21st century, with Burlington sweating through at least 10 additional days of 90-degree-plus heat by 2100, predicts the study, published in the Journal of Applied Meteorology and Climatology. It foresees that annual snowfall totals at six studied ski resorts will decrease by about half over the next 85 years.

Some climate projections, however, are fraught with uncertainties, Wolfson cautioned in his talk at St. Stephen's. And Guilbert and Beckage both acknowledged in interviews that their 85-year forecast for the Lake Champlain basin should not be regarded as definitive. "There's a fair amount of uncertainty in this, especially when taking global models down to the regional level," Beckage said.

In making the case for actions to address climate change, it's important not to be "alarmist," Wolfson told the Middlebury audience. There's no firm evidence linking extreme weather events such as Hurricane Sandy to changes in the atmosphere wrought by human activities, he said. And despite the heating of the planet, it's not clear that Antarctica's ice sheet is actually losing ice mass, Wolfson added. The increased precipitation projected in some climate-change models may be adding enough snow to Antarctica's icepack to offset what's being lost to melting, he said.

"Much of what we know is rock-solid," Wolfson commented in a follow-up interview. "But there are areas where we're not so sure. It's more subtle than climate activists make it out to be."

Complicating the issue — and perplexing many climate scientists — is the slowing rate of global temperature increases measured during the past 15 years. Climate-change deniers have seized upon this so-called hiatus in global warming as proof that the recorded rise in atmospheric greenhouse gases will not trigger the effects feared by climate-change affirmers.

Wolfson accepts that the hiatus is real. He suggests that the global temperature increase has decelerated in part because of a cyclical drop in the energy output of the sun. "We've been in a phase where the natural variability of climate is downward," Wolfson says.

But 15 years is too brief a period, in climate terms, to draw conclusions contradictory to the mass of evidence showing that Earth is warming, he adds.

"We're always going to have science that tells us different things about climate," says Maeve McBride, a leader of 350 Vermont, who's helping plot logistics for the march. And it doesn't much matter to McBride if climate change occurs more slowly and less calamitously than some analysts suggest.

"There are lots of reasons for transitioning from fossil fuels," she says. "The threat of global warming is just one."

The quest for oil and gas, for example, is having political and environmental consequences that even some climate-change agnostics might acknowledge as disastrous. There's also the issue of environmental injustice, whereby those least responsible for global despoliation are experiencing its harshest impacts. Africans, for example, have accounted for a minuscule fraction of the 500 billion tons of carbon dioxide pumped into the heavens since the start of the industrial age, but the U.N. says that threats to food supplies linked to CO2 discharge are particularly acute in parts of Africa.

Marjeela Basij-Rasikh, a Middlebury College student from Afghanistan, noted at the St. Stephen's meeting that incessant warfare in her country befogs its environmental devastation. She pointed to worsening air pollution, diminishing supplies of clean water and a rapid rate of deforestation that are being ignored by a government preoccupied with other existential perils.

McKibben in turn cited Basij-Rasikh as one of the young, non-Western activists who are multi-coloring the complexion of the climate-change movement, even in Vermont. It no longer consists largely of "pale, stale males," McKibben said. And Sunday's climate march will illustrate this new degree of diversity, he predicted.

But Dave Coppock, a 59-year-old carpenter, plans to join the demo after cycling 240 miles from Rutland to Manhattan for two days on his carbon-fiber racing bike. A self-described refugee from "the degraded environment" of the Philadelphia suburbs, Coppock says, "All my life I've been plagued by the feeling that we're destroying the Earth. We're like a bunch of alcoholics. We can't admit we have a problem, and we haven't hit bottom yet. But we are going to."

Coppock says he isn't biking to New York in order to save gas money or to flaunt his greenness. "I'm not perfect," he concedes. "We all get on airplanes, we all use energy irresponsibly, but it is possible to do things more sustainably if we choose to."