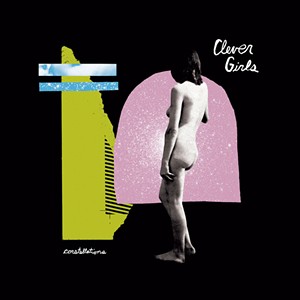 In March, Maroon 5 front person Adam Levine told Apple Music 1 DJ Zane Lowe, "I feel like there aren't bands anymore ... I feel like they're a dying breed," reports the Guardian. He wasn't wrong. Do you see many bands on the music charts lately? You might catch a glimpse of mono-genre outfits such as Levine's, or maybe Coldplay or Imagine Dragons. But they're outliers in a culture that elevates and venerates solo artists like never before.

Thankfully, bands are still very much a thing in Burlington. I don't think it's because we're out of the loop. I think it's because community is precious in the Queen City. And I know that togetherness is hugely important to rock quartet Clever Girls.

Released in March on EggHunt Records (the label that launched Lucy Dacus into the stratosphere), the band's sophomore LP, Constellations, had been shelved for a year, largely due to pandemic chaos. But the postponement was a good thing for the group. Its members got their house in order and came out the other side with a renewed sense of purpose.

Even before the hiatus, the band had grown its sound considerably, and Constellations showcases its progress. Glossy overtones and attention to atmosphere bring a newfound smoothness to Clever Girls' innate rawness. And front person Diane Jean, who uses gender-neutral pronouns, is continuously compelling and relatable in songs about knowing oneself and daring to share that with others.

In Constellations, Clever Girls continues to tunnel deeper into grunge while finding ways to experiment. For instance, opener "Come Clean" is maybe the boldest move Clever Girls have ever made. Jean greets listeners with their trademark vocal tremble, oscillating between falling-apart vulnerability and white-hot conviction. Backed by Rob Slater's solitary drum hits, Jean's vocals hover precariously in the capacious tune. Then bandmates Winfield Holt and Tobias Sullivan slide in with unobtrusive guitar and bass that morph into a barrage of hot strikes. The song starts the record with extreme highs and lows of sound and emotion.

The 10 songs on Constellations are perfect examples of Clever Girls' pattern of pairing light with heavy. Jean's vocals often sound wafer-thin as they sort through a thick fog of conflict. "I've been fighting sleep / Don't have much energy for writing," they sing in the dirge-like "Womxn." The song is one long crescendo, reaching a muddy heavy-metal climax.

Tight snarls of guitar give "Baby Blue" an outlaw-Americana vibe. The 3.5-minute song creeps toward a beat that doesn't fully arrive until less than a minute before the finish, perching on the edge before a cathartic swan dive.

Even though I would never describe Clever Girls as "easy listening," there's nonetheless something easy about listening to Constellations. Perhaps Jean's honest and empathetic delivery makes their painful songs land more gracefully. Or maybe it's the chemistry among the band's players. Either way, it's an uplifting experience.

Constellations is available at clevergirlsmusic.bandcamp.com.