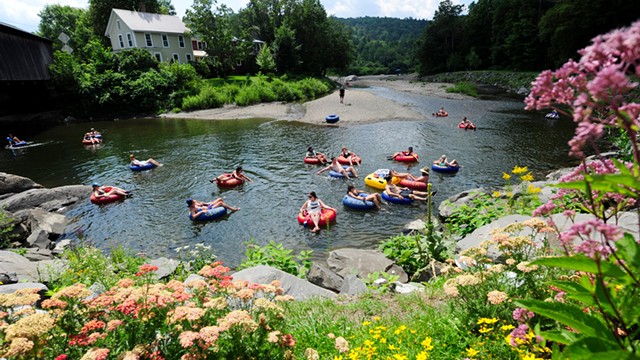 Pro tip: If you want to spend a lazy summer day drifting down the Mad River on an inner tube — and really, who wouldn't? — bring a pair of sandals, water shoes or even sneakers.

"I always tell people when they go out, 'You need to wear shoes,'" Barry Bender said. "Most folks do. But some people..." he continued, trailing off with a wry grin and a roll of his eyes.

Bender is the owner of Clearwater Sports, an outdoor gear outfitter and guide center in Waitsfield that offers river tubing. He recalled two young women in a tubing group last summer who learned to heed his advice the hard way. They had floated farther down the river than they should have and had to walk back upstream barefoot. It did not go well.

"They came back, and their feet were all torn up," Bender said. "And their friends kept saying, 'Barry told you!'"

"It's not just a float down the river. They make it an adventure." Barry Bender tweet this

For nearly half a century, adventure seekers in the Mad River Valley have flocked to Bender and Clearwater for their water-sports fixes. In addition to tubing, the funky Main Street outfitter offers canoe, kayak and paddleboard rentals, as well as guided excursions along the Mad and Winooski rivers that thrill paddlers of all skill levels — or at least those who follow the guidance of Bender and his employees, presumably.

"Best day ever for parents and kids alike," wrote one emoji-happy Facebook reviewer following a guided kayaking excursion on the Mad River. "Great instruction and assistance."

Bender opened Clearwater in 1975, renting canoes out of a barn in nearby Moretown. As it expanded, his shop moved around Waitsfield before finally settling in 1983 at its current location, which backs up to the Mad River.

These days, tubers can walk five minutes from the shop's front door to the put-in spot and then drift the day away. Riders on Clearwater's colorful tubes are a regular sight bobbing beneath the covered bridge that crosses the river on Bridge Street. But when Bender first opened here, the draw was not relaxation but adrenaline. Whitewater kayaking and canoeing were Clearwater's main attractions. 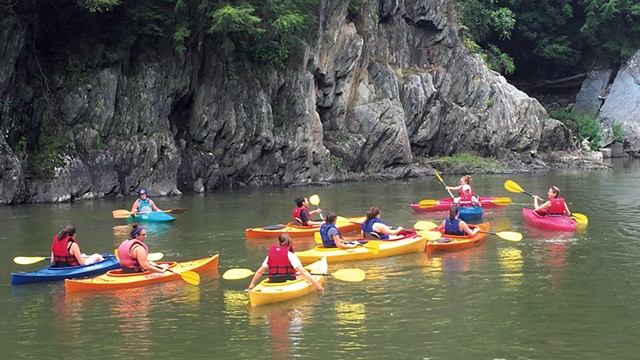 "The Mad River was very different back then," longtime store manager Craig Richardson explained. "It was known for Class II and III whitewater."

A major storm in 1997, as well as Tropical Storm Irene in 2011, dramatically changed the river. Floodwaters washed away boulders and deposited gravel into deeper channels. Coupled with drought conditions the past few summers, and this one, the result is a decidedly less-angry Mad River.

"Now it's just more of a mellow floating river," Bender said. A tubing trip can last anywhere from one to three hours, depending on the water level. It takes longer when the river is low, because you may have to walk through shallow sections — hence the shoe recommendation.

As such, most of Clearwater's guided canoe and kayak trips take place on the Winooski River, which Bender said is "bigger and deeper." Two longtime guides, Kim Poach and Tyler Willis, lead the majority of those excursions.

"It's not just a float down the river," Bender said. "They make it an adventure."

A reviewer on the travel website Tripadvisor agreed, writing, "We had an incredibly fun time and the staff at Clearwater Sports is wonderful and extremely accommodating."

Lately, paddleboard rentals have been popular at Clearwater; the shop regularly hosts demos at nearby Blueberry Lake. It does a good business in retail sales, as well, selling both handmade and inflatable boards.

Clearwater also hosts paddleboard yoga classes. For those wary of wet downward dog poses, Bender assured, "It's actually easier than you think." He added that "98 percent" of paddleboard yogis don't fall. "It's easy and fun," he said.

Business-wise, the pandemic held some rapids for Clearwater, which operates year-round and also caters to winter sports. As at other outdoor gear retailers, sales were often brisk, though supply-chain problems made certain items hard to come by.

Tours were affected, too, Bender said. They're on the rebound this summer, though with some lingering pandemic restrictions. For one, Clearwater operates its shuttle van for tubing trips on a limited basis, preferring not to mix groups of customers.

Bender and Richardson are relieved that the pandemic has eased in Vermont and business is somewhat back to normal. However, they noted that COVID-19 isn't fully in the rearview, especially for businesses that rely on out-of-state tourists. Signs by Clearwater's entrance alert customers that masks are still required inside the store.

"I do think it's ironic that it took a pandemic to get people outside again," Bender observed. "But it's good that they are, and Vermont is a good place to be outside in."

Just make sure you've got shoes.

Correction, August 2, 2021: An earlier version of this story misidentified the year in which Clearwater Sports opened. It opened in 1975.

The original print version of this article was headlined "Current Affairs"