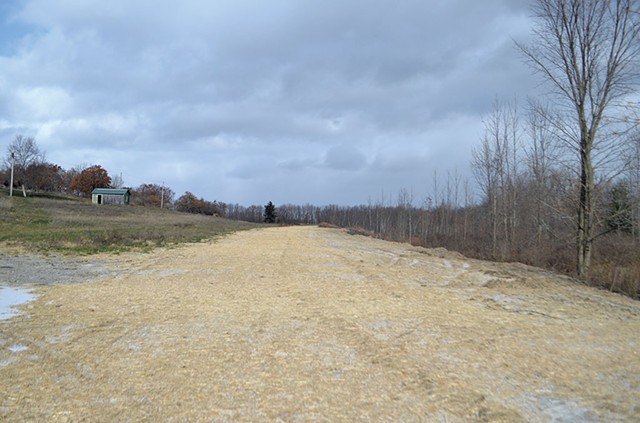 Loons and herons gather along the shoreline, Deborah said on a frigid day last week, gesturing to the living room's large plate-glass windows, which offer views of a channel that opens onto Lake Champlain. Majestic bald eagles, peregrine falcons and osprey soar overhead. Boaters and kayakers cruise by on the tranquil waterway.

But the Richardsons fear that the buzzing of small planes could ruin future lazy days at the lake. Two neighbors, Larry Dupont and Glenn Cotton, want to operate a private, 2,000-foot-long grass airstrip on land they own on Macomb Bay Lane, just down the road from the Richardsons.

It's not just the noise the Richardsons and other residents fear. They worry about safety and the prospect of plummeting property values for the 60 some homes immediately south of the planned strip. And in the branches of a large cottonwood tree a few hundred feet from the proposed runway, a family of bald eagles has made a nest.

"The place is magic," Scott Richardson said of his neighborhood. "And we just don't want the magic being wrecked by some rich guys playing with their toys."

Dupont and Cotton, who are recreational pilots, have plenty of toys to play with, Richardson asserted, not to mention an aquatic airstrip. In 2006, Dupont registered with the state a section of water outside his house on Lake Champlain to land his seaplane. Cotton uses it, too, for his own amphibious aircraft.

Such runways, known as "restricted landing areas" or RLAs, are not uncommon in Vermont. Approximately 70 currently operate in the state. Several belong to hospitals or the military. Some are helipads. A few are in the Champlain Islands.

But their prevalence doesn't mean that Dupont and Cotton's latest proposal — this one on land — will be cleared for takeoff. Procedural snags and a large vocal group of opponents are already prompting delays.

Small planes make Bumgardner uneasy. She was a passenger in one that nearly flipped while landing. Her brother died in a plane crash a few years later. Now she's steeling herself for a runway next door.

"I'm a firm believer in, if you've got a bunch of land, you should be able to do whatever you want with it. Firm believer!" she said. "But you gotta take into consideration how it's going to affect your neighbors."

When reached by phone, Dupont, a commercial pilot who flies long-haul routes to Asia and Europe for American Airlines, said he was preparing to leave the country for work and could not talk to a reporter. Cotton, who cofounded the company Bath Fitter, did not answer the door of his North Hero home nor a call to the telephone number he listed on the RLA application. Harry Parker, the duo’s attorney and a member of the North Hero Selectboard, refused to comment, citing attorney-client confidentiality.

But a review of audio recordings, meeting minutes and other public documents sheds light on the proposal.

At an August 6 meeting of the North Hero Selectboard, Parker recused himself to present the pilots' proposal to his four colleagues. He asked the board for "consent for the process to continue" and got it in a unanimous vote. Board chair Eileen Mitchell drafted a letter for the men that read, "Our town has no zoning bylaws or ordinances prohibiting" the RLA request.

In the application for the strip, the pilots listed three single-engine planes they'd use on the runway: an American Champion Citabria Explorer 7GCBC, a Piper PA-18 Super Cub and a Cessna 180. The men intended to use the runway year-round "for daytime, fair weather recreational flying" and would limit themselves and their guests to four flights per day. The pilots could store up to 90 gallons of fuel in each of the planes' hangars, per a recommendation from North Hero Fire Chief Michael Murdock, and, in the event of a crisis requiring a fast response, would make the strip available to first responders.

Two fellow pilots wrote letters supporting the men's plan. And in a separate note, Dupont said he'd received "no complaints" in 12 years of operating his seaplane RLA. He also touted his four decades and 30,000 hours of accident-free flying, including at the helm of the Boeing 787 Dreamliner, a massive jet that holds hundreds of passengers.

"These qualifications put me squarely in the position of the most qualified aviators in the world," Dupont wrote.

As one of the conditions, the men agreed to hold a community fundraiser at the airstrip each year for a local nonprofit. They also vowed to "operate in a noise friendly manner to the neighborhood at all times" and, in order to be as quiet as possible, "land south and take off north whenever conditions safely permit."

Much of the runway appears to have been built already. Straw covers the open expanse, which is 2,000 feet long and 60 feet wide. According to Bumgardner, the next-door neighbor, workers have been moving dirt on the property for about two years. The men removed some trees and graded sections to level out the field.

A state regulator who evaluated the site in August found the runway to be of adequate length and, pending some additional improvements and approvals from other administrative bodies, signed off on behalf of the Vermont Agency of Transportation.

On October 16, local residents received letters from attorney Parker detailing the plan and alerting them to a public hearing before the Vermont Transportation Board, a quasi-judicial body that regulates such matters. Many of them were shocked, according to the Richardsons; it was the first they'd heard of the project. The seasonal ones — who account for roughly three-quarters of the immediate neighborhood — had already closed up their homes.

"The way it read, people thought it was a done deal, so a lot of people didn't go to the big meeting that we had," said Deborah Richardson. "They thought that there was no way they could do anything because of the lawyers and all this stuff."

That didn't prevent 40 neighbors, most of whom are against the proposal, from crowding into the North Hero Community Hall on Halloween to complain about the plan. Four hours into public comment, the board shut it down and promised to reconvene the following month.

Opponents kept up the dissent at a November 5 selectboard meeting. Several argued that the municipal board never should have allowed the process to go forward.

Christine Salembier, a North Hero resident and former commissioner of the Vermont Department of Public Service, told the selectboard that the group wanted an "open, transparent community discussion where everyone becomes really clear about the legal process."

"I think at the very heart of this is that we want to be heard," she said. "Most people had no notice of this. It just happened."

Two days later, the opponents got some welcome news. The transportation board filed a "recess memo" ordering Cotton and Dupont to refile their request with "the appropriate municipal panel." The significance? If, for instance, the development review board heard the case and made a ruling, the neighbors could appeal the decision on the local level, before the state received the application.

The memo also ordered the pilots to apply for a state permit because of the proposed strip's proximity to the eagle's nest.

Louis Porter, commissioner of the Vermont Fish & Wildlife Department, said such "threatened and endangered" permits are common in instances when human development rubs up against the natural world.

"I would be surprised if this issue prevented the project from going forward," Porter said. "I do think there will be some conditions and some considerations to protect the eagles."

For instance, the pilots could face restrictions on flights during the winter and spring months when the eagles are nesting, the commissioner said, or they could be forced to give the nest a wider berth.

The order means it's up to Cotton and Dupont to make the next move. Porter said the pilots had yet to apply for a threatened and endangered permit with his agency. And North Hero town clerk Pete Johnson said the men hadn't again asked for municipal approval for the project.

They have until February 7, when the Transportation Board would "dismiss the application as incomplete." That would be just fine with the neighbors. They hope this latest turbulence ultimately grounds the project for good.

"Is it selfish of all of us, the 59 residents around here and all the other people, to not want this, to want peace and quiet?" Deborah Richardson said of the proposed runway. "People are moving up here for retirement, and I just wouldn't have bought this house if I had known. There's no way."