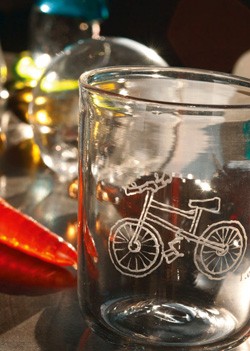 Rich Arentzen and Tove Ohlander jumped through multiple, prolonged hoops to get their Pine Street glass-blowing studio, AO Glass, up and running last November. Yet, instead of diving into profit-driven production, the couple’s first major project of 2012 is a philanthropic campaign.

Called 12.12.12, it’s a collaboration with 12 nonprofits to create small glass items for sale representing the organizations’ causes. In the vein of the white polar bear ornament the studio created for Polar Bears International in time for the holidays, Ohlander and Arentzen are now offering 11 more items, including an orange-and-green glass carrot for the Intervale Center, a small drinking glass depicting a bike for Local Motion and a sleeping brown bat for Bat Conservation International. Each organization will receive 12 percent of profits from sales. The glass items run $22 to $36 each.

“I feel like this [12.12.12 campaign] comes from living and breathing the Vermont spirit for five years,” explains Ohlander, a Swede who moved here in 2006. Turning down the studio’s loud furnace, she adds, “There’s a way of including each other in Vermont and trying to work together to solve problems.” In that spirit, AO Glass and JDK Design recently exchanged an AO logo overhaul for glass-blowing lessons. JDK also designed 12.12.12’s Celtic-knot-like emblem.

Ohlander says the project has been rewarding. “I strongly feel that it’s individuals’ and businesses’ responsibility to take a good look [at environmental, humanitarian and other issues of our time],” she says gravely, “because, if no one takes responsibility, there are no role models. We want to be role models.”

That said, Ohlander and Arentzen are also artists with a knack for conjuring attractive, tactile items from molten glass. An oversized brown coffee bean for Food 4 Farmers, a South Burlington-based organization that addresses hunger among Latin American coffee-farming families, invites palm massages; a small, black-and-gold-striped bee, representing the Vermont Beekeepers Association, is as minimalist and adorable as AO’s polar bear.

“I try to make really brutal art, but it usually comes out cute,” jokes Arentzen, who has fired up a “glory hole” and is pincering tufts from a ball of soft, yellow glass.

All 12 objects are available at AO’s studio and website, and some or all will be sold at venues such as Shelburne Museum, Shelburne Farms, Frog Hollow, The Green Life and the Peace & Justice Store. AO has also applied for inclusion in the Smithsonian Museums’ “Made in America” store, an initiative of Sen. Bernie Sanders. The organizations themselves aren’t being asked to carry or market the items because, Ohlander explains, “We don’t want to put any workload to them.”

Local Motion, though, will likely carry the bike cup in its retail space, according to executive director Chapin Spencer. “It’s a really inventive fundraising idea,” he says. “It gets out our message, and it also gets a local product into people’s hands.”