Claude Mumbere Is Vermont's Voice at Poetry Out Loud 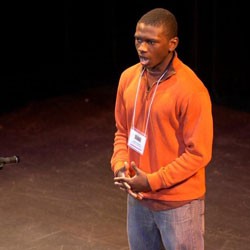 If you’re going to enter a poetry recitation competition, it sure can’t hurt to sound like James Earl Jones. That’s exactly who came to mind when I heard the uncannily deep-voiced, and deeply focused, 17-year-old Claude Mumbere recite last Wednesday at the Barre Opera House as one of the statewide contestants in Poetry Out Loud. I had the honor of being one of five judges in the final stages, in which we narrowed a field of 12 high school students to four, and then one. It was remarkably suspenseful.

All of the finalists had a good command of their respective poems and a confident stage presence — but Mumbere clearly stood out. The Burlington High School junior won the Vermont competition; Nora Gair, from St. Johnsbury Academy, was runner-up. Mumbere will represent the state next month in Washington, D.C. There, $50,000 in prizes will be awarded; the winner gets a $20,000 college scholarship.

Poetry Out Loud is a national project supported by the Poetry Foundation and the National Endowment for the Arts. The Vermont Arts Council partnered with those organizations to present the state finals, coordinated by the VAC’s education and community arts programs manager Stacy Raphael. Some 5000 Vermont high school students participated in their classrooms; 31 competed at the Barre Opera House last week. Vermont poet and slam champ Geof Hewitt was the witty and enthusiastic emcee, a role he has performed since Poetry Out Loud took root in Vermont six years ago.

Mumbere is a varsity soccer player and an “excellent student,” according to his English teacher Benjamin Roesch. “He’s my student in the honors-level American literature seminar,” Roesch says. Roesch, along with fellow BHS teacher Erika Lowe and speech pathologist Scott Stone, introduced POL to the school just last year. “Erika had taught at Rice [High School] and done the program before,” Roesch explains. “Poetry Out Loud looks for motivated teachers, and sometimes everyone in school does it … My hope is, it will become a norm in our school and we’ll do it every year.”

At BHS, 75 students did POL in class — Roesch made it an assignment, he says — and 10 of them participated in an after-school recitation competition. Mumbere was the only BHS student at the state finals.

Mumbere is the son of immigrants from the Democratic Republic of the Congo who moved to the U.S. about six years ago and have been in Vermont for just two. His father, Pierre Mujomba, is a scholar-in-residence at St. Michael’s College and teaches African literature. One of four children, Mumbere grew up in a multilingual family — the DRC is officially Francophone — but his smooth, unaccented English sounds like he was born intoning it.

“Even in class presentations, students are just struck by him — his natural presence and, of course, that voice,” says Roesch. “Claude is a very humble guy … I was showing him a video [of Mumbere reciting] on my iPhone the other day,” Roesch continues, “and he said, ‘Oh, my God, I sound like Darth Vader.’”

For his part, Mumbere admits he’d never recited poetry before Roesch’s English class. “I thought it was a cool idea and thought I’d give it a try,” he says. For Poetry Out Loud, he notes, “I selected a few poems from the database and website.” POL offers hundreds of classic poems, spanning centuries, for students to choose from — hip-hop or slam this is not. Mumbere picked “Do not go gentle into that good night” by Dylan Thomas and “I’m a Fool to Love You” by Cornelius Eady for his semifinal rounds. In case he made it through those, which he did, Mumbere had at the ready “The Passionate Shepherd to His Love,” written by Christopher Marlowe in the late 16th century. It was not a facile choice, nor what you might expect a 21st-century teenage boy to deliver with dignity. But it did the trick.

“Claude has an enormous depth of understanding,” says Roesch. “Here’s a kid who really just gets it — and he makes you feel it.”

Mumbere admits friends have suggested he “give theater a chance,” but he says he’s thinking about medicine as a career path. Right now, at least, “there’s no time for drama — I’m a year-round soccer player.”

And that may be another reason the show of support for Mumbere at BHS “was pretty unbelievable,” notes Roesch. It made his English teacher’s heart swell. “There were lots of high fives in the hallway. The school has really gone nuts over it,” Roesch exclaims. “I thought, This is all for poetry — how cool!”

The Vermont Arts Council’s Arts Advocacy Day is next Wednesday, March 30, 8 a.m.-5 p.m., in the Statehouse, Montpelier. Claude Mumbere will recite a poem in the closing ceremonies at 4:30 p.m.

Also, the deadline for nominations for Vermont’s next poet laureate is this Friday, March 25. Info for both at vermontartscouncil.org.