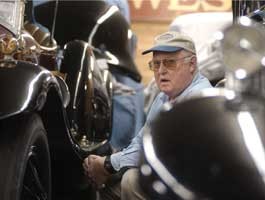 In seventh grade, Adrian West and a pal made a wooden vehicle powered by a one-cylinder washing-machine motor, then tooled slowly around town until the state police pulled them over. The determination to get behind the wheel of a jalopy didn’t stop there.

Vermont-based West got his driver’s license at 14, in Florida — the only state where it was legal at that age. Working on his used 1927 Ford involved regular searches of a farmer’s field that had become a junkyard for Model T parts.

“It was kind of a nifty little thing,” the car-crazy Morrisville native says of the first in a long line of classics he has bought and restored to their former glory.

More than five decades later, 69-year-old West has lost none of his passion for the grand old conveyances that helped shape the 20th century’s American dream. He enters his autos in competitions at antique-car meets, talks about them with fellow devotees and watches for rubber-meets-the-road contraptions that might be worth snapping up. “I’m always looking for something different,” he says of his pursuit. “That’s the disease.”

This activity is not about speed, torque, global positioning systems or any newfangled invention that gives the modern automotive industry its sex appeal. When West puts the pedal to the metal, it’s to rev up interest in a bygone era. He belongs to a breed of men who consider the elegant old autos to be works of art.

“Work” is the operative word, though. West spends hours tending to the ageless beauties in a cramped machine-tool shop in the garage of his 19th-century family homestead — he was born in the room where he now sleeps. On a nearby street, he maintains a warehouse full of autos, many with wire-spoke tires and jump seats. He counts about 23 vintage cars in his current collection and loves to discuss their engaging histories.

A black 1946 Cadillac 60 Special he found in Pennsylvania two years ago has an enormous clock on the dashboard, a beige Bakelite steering wheel, a tiny rear window, lots of chrome and enough space in the back to host a small party. “When I was 16, I would have killed for a car like this,” West acknowledges. “I suspect it might have been part of an undertaker’s fleet. This Caddy has won its share of originality awards.”

The 1935 Rolls Royce Phantom II town car that West purchased in the early 1960s came with a shriveled cow-leather roof. It has since been replaced by the hide of a Clydesdale horse that was put down. West helped skin the dead creature himself. The free-standing headlights are as big as formal dinner plates, and the original hood ornament is a female figure with wings, dubbed “The Spirit of Ecstasy.”

West knows the provenance of the rig, which sports two brash-sounding horns on the front. “This car belonged to a Long Island man named A.L. Hume, who got a new one in 1937,” he explains. “Coincid-entally, I met one of his sons in Vienna in 1973, when he was our ambassador to Austria. I gave him some maple syrup.”

Rural Vermont — in particular, Lamoille County — might seem an improbable base for West, whose hobby carries connotations of vast wealth and lots of leisure time. Yet he’s proud of the apparent contradiction. His late father Rethel — named for a character in Beowolf — owned real estate in Florida as well as a now-defunct Ben Franklin store in Morrisville. Adrian worked there as a kid and for most of his adult life.

“I was always perfectly happy to be a small-town merchant,” West says. But his air of sophistication suggests experiences way beyond nearby Stowe. West “prepped” at the tony Exeter Academy and then majored in “money and banking” at the prestigious Harvard College. He was employed by a railroad company in Boston before joining the Navy in 1956.

West purchased a new Mercedes Benz while he was stationed in France, near the seaside resort of Nice. When his commanding officer questioned him about it, “I told him, ‘I may only have one stripe, but I never said I was poor,’” he recounts. His father was an enthusiastic supporter of his collecting habit. “When Papa came to visit, he wanted my car,” West recalls. “So I gave it to him and got another one.”

After seeing a bit of the world, West came back to the Green Mountain State in 1959 to help run the family business. He had already been bitten by the antique-car bug and became a member of the Vermont Automobile Enthusiasts. The group offered networking opportunities, but West taught himself authentic restoration techniques. “I loved anything mechanical,” West explains.

That affection also attracted him to airplanes. West had learned to fly in the military by piloting his ship’s helicopter. Back in Vermont, he bought a 1948 Cessna and worked on it under the aegis of a federally certified mechanic. After 25 years of flying, he no longer owns the aircraft. And after 40 years in business, his variety store closed in 1999.

West’s commitment to cars, on the other hand, continues. It’s an obsession. He describes his maroon 1941 Lincoln Continental as “probably the most handsome automobile ever made,” glancing at a decorative front grill that encases enormous headlights resembling Spider-Man’s non-circular, arachnid eyes.

West constructed the dashboard on his 1924 Rolls Royce Silver Ghost to look something like a submarine control panel. The sporty car is a tight fit for two people, but a “dickey seat” — also called a “rumble seat” — and a luggage rack adorn the back. It has no doors, and curtains instead of glass side windows. The running board is so high that petite passengers would have needed a stepladder to climb inside.

“I traded an MG for it in the late 1970s,” West says. “I only got the chassis, though. The body came from a friend in South Florida. So I married the two.”

A 1922 Franklin in West’s workshop was also a trade. The “roadster” is just a few steps up the vehicular food chain from an old-fashioned buggy. The chassis for a 1938 Bentley also occupies the room; the body to match it resides in the warehouse. “When I get them, they often aren’t worth much. I have a lot of hours in these cars. Hopefully, I’ll live long enough to see all my projects done.”

West spends 40 to 50 hours a week bringing new life to his prized possessions, some of which are hauled to the 20 or so antique-automobile shows he visits every year. A week ago, a friend in Rutland invited him to an upcoming meet in Connecticut that will feature pre-World War I cars. West agreed without hesitation.

Not-so-organized encounters can result in bonding that transcends differences in age and gender. In 1995 West was passing through New Hampshire and stopped at The Roadkill Café in North Conway. A motorcycle gang had gotten there first, but its members admired his red 1924 Rolls. “They were very respectful,” he recalls.

A different road took West to Europe four or five years ago. “An English friend and I located a rusting, two-cylinder 1903 Rolls Royce in Eastern Wales,” West says of the trip. “This was the only one we knew of still in existence.” But West opted not to buy it. “That car is for experts in pre-Silver Ghost Rolls,” he says. “They’re practically extinct.”

What would really tempt him — if there were room in his warehouse for further acquisitions? “A 1941 Packard station wagon,” he confides. “I used to own one, but made the mistake of selling it.” Longings like that drive the world of antique autos.