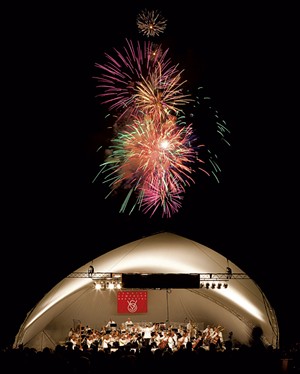 On a Wednesday in mid-May, I entered the Stowe Community Church to see the first live performance of classical music I had experienced in more than a year: Middlebury pianist Diana Fanning playing works by Maurice Ravel, Frédéric Chopin and Franz Schubert. The formidable entrance requirements included emailing an image of my COVID-19 vaccination card to Stowe Performing Arts, which hosted the concert. Audience members were led to seats spaced six feet apart. But the payoff was hearing those nuances of interpretation and volume that virtual mediums never quite capture.

"People yearn for that in-person experience." Liam John tweet this

As masks fall away and the weather warms, classical musicians' schedules are filling up with live gigs, and festivals are reviving their summer seasons. There's even a new concert series in a Jericho barn. With so many performances cropping up as the state lifts its pandemic restrictions, the following list is only a sample — but a good start for enjoying Vermont talent in person again.

Music in the Barn

Essex-born Liam John, who studied with Vermont Symphony Orchestra principal cellist John Dunlop, recently returned to Vermont to attend the Larner College of Medicine at the University of Vermont and — in his free time — to start a concert series. "People yearn for that in-person experience," the 27-year-old cellist noted by phone.

The informal series Music in the Barn evolved from John's friendship with Dunlop, the latter's violinist partner, Laura Markowitz, and violinist Sofia Hirsch. The venue, an "amazing" barn untouched since the 1940s, is attached to the renovated milkshed apartment that John rents from Dan and Amanda Goosen; the couple has agreed to let him host six concerts in the barn's hayloft.

Vermont Symphony Orchestra flutist Anne Janson and Rebecca Kauffman, a Burlington-based harpist who is the principal harpist of Pennsylvania's Harrisburg Symphony Orchestra, pair up for this half-hour program. "For both of us, this program is a celebration of the joys of live music. We just rehearsed the other day, and we were enjoying every second of it," Kauffman wrote in an email. Programming includes François-Joseph Gossec's jaunty "Tambourin" and Maurice Ravel's "Pièce en forme de habanera." The latter, originally composed for wordless voice and piano, is beguiling when played by flute and harp.

Artistic director Cynthia Huard, a pianist and harpsichordist, has scheduled four concerts in this picturesque central Vermont village, including a final one featuring herself and violinist Mary Rowell playing works by Johann Sebastian Bach, Franz Schubert and Arvo Pärt. Audiences can make their own music at the Community Music Share on July 17, from 1 to 3 p.m., "where we have invited any level musicians in the community to share 4 to 5 minutes of music that sustained them during the pandemic," Huard wrote in an email.

Saturdays at 8 p.m. and Sundays at 2:30 p.m., July 17 through August 15, at Persons Auditorium, Marlboro College. $30; sold out; wait-listed tickets only. marlboromusic.org

The premier destination for top chamber musicians and their audiences is back after a virtual season in 2020.

The venerable six-week chamber music series, led by cellist Fran Rowell and violinist Mary Rowell, is now in its 55th continuous season: It toured outdoor venues last year using a refurbished trailer. This season, the sisters will present one indoor and one outdoor concert each week.

Programming melds traditional and pop music because, Fran said by phone, that's how it's always been: "Maroon Five did Pachelbel's Canon a few years ago, and Mozart had to write minuets for dances because he had to feed his kids." One representative program moves from Freddie Mercury's "Bohemian Rhapsody," arranged for solo violin, to Jesse Montgomery's "Strum" for string quartet. It finishes with "Craftsbury Trio" for violin, cello and piano — written for the group by former Vermont composer Gwyneth Walker.

"Yes, we are schlepping a Yamaha upright around this summer" on the trailer, Fran confirmed.

Music at the Beach

Rivaling the trials of the pandemic are the herculean efforts of Floria Tosca in this opera to save her lover, Mario Cavaradossi, which end in the death of both. Barn Opera artistic director and tenor Joshua Collier said the production will be the first post-pandemic live opera in Vermont.

"We all have such a renewed sense of how important the communal element of live opera is," he said by phone. "This is an opportunity to be completely awash in the glory of the human voice."

Saturdays and Sundays, August 21 through 29, at the Elley-Long Music Center in Colchester. Pricing not available at press time. lccmf.org

Northern Vermont's premier festival has undergone some changes recently. Resident composer David Ludwig was named dean and director of music at the Juilliard School in New York City, so his presence at LCCMF will be virtual this year. And new executive director Robert Whipple replaces Jody Woos, who is retiring.

Married artistic directors Soovin Kim, a violinist, and Gloria Chien, a pianist, named the festival's 13th season (intended to be its 12th) "Epiphanies" for its now-timely focus on works of music that "respond to big, life-changing events," Kim said by phone.

Among these are pieces written just before each composer's death, including Franz Schubert's String Quintet in C major and Richard Strauss' Four Last Songs. The fest will also see the premiere of a new chamber opera, A Song by Mahler, by Marc Neikrug, co-commissioned by LCCMF and four other chamber music entities. Written for two singers, string quartet and clarinet, it tells the story of a singer with early-onset Alzheimer's and her accompanist-husband.

"There's something undeniably powerful about these works," Kim said.