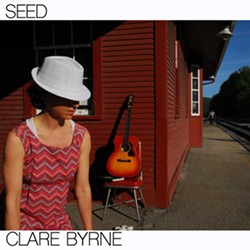 Relentlessly creative, Clare Byrne is a modern renaissance woman. As a senior lecturer in dance at the University of Vermont and an accomplished dancer and choreographer, her primary passion is movement. But Byrne's artistic impulses have led her to other mediums, including art, writing and music. Her debut EP, Seed, is something like her varied artistic oeuvre in microcosm. Though a scant three songs, it suggests a curious and expressive mind as well as an artist unafraid of taking risks.

That last quality is made evident in the EP's opening passage. The lead track, fittingly titled "New Moon," begins on a clunky assortment of harmonica, horns and percussion. With lax 3/4 rhythm and warbly intonation, it has the feel of a second line as performed by distracted middle schoolers — or perhaps drunken Mardi Gras revelers. When the song begins in earnest, the transition is jarring, though likely intentionally so. "New Moon" is a sweet, folk-rock-inflected ode to the dawning of new love. Perhaps, then, the cacophony that bookends the cut is meant to evoke the stumbles that often precede — and sometimes follow — finding romantic contentment.

Byrne has a lot of ideas and the heart to match. But one challenge of overwhelming creativity is managing those ideas and resisting the urge to express them all at once. Particularly within the constraints of folk and rock music, a little restraint goes a long way. At certain moments — in the second song, "Child," for example — Seed feels overburdened by artistic ambition, as if there's not quite enough soil in its three songs for all of Byrne's ideas to bloom. They're just planted a little too tightly.

Fortunately, those moments are fleeting. Whenever an arrangement begins to feel cluttered or unfocused, Byrne is usually able to rein it back in. She's a sturdy, unflashy singer who conveys emotion through tone and a heart-on-sleeve writing style. When she takes command of a song, her veteran band affords her room to stretch out. Local electric guitarist Ted Looby, Brooklyn pianist Dan Strauss, Brooklyn- and Paris-based acoustic guitarist Remy de Laroque and the rest of Byrne's crew are fine players whose contributions color her writing with worldly flair.

Seed closes on "Young Girl." Byrne is enamored of personal and emotional growth, both of which are fertile topics in her writing. Here, over a sparse, rhythmically driven arrangement, she examines some of her formative life experiences — learning to crochet, swim and dance, among others. She takes a rudimentary and repetitive lyrical approach that almost gives the song a nursery-rhyme feel. It's a daring tack, but it pays off and bodes well for Byrne's future musical forays.

Seed by Clare Byrne is available to stream at SoundCloud. Byrne plays a CD release show on Saturday, May 27, at the Light Club Lamp Shop in Burlington.