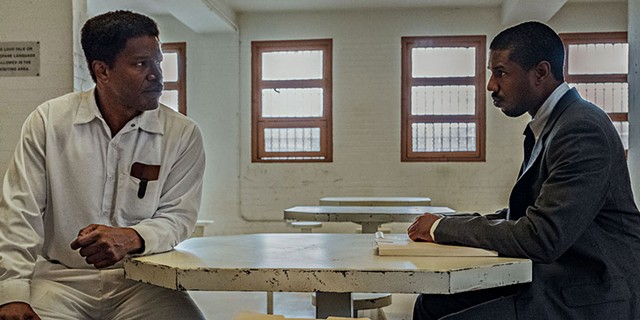 This has been a good year for "moments of Zen" in movies. In A Beautiful Day in the Neighborhood, Fred Rogers asks a reporter to take a moment to think about everyone who "raised him up with love." The two men go silent, everyday sounds retreat, and an interview in a busy restaurant somehow becomes a brush with the sacred.

A similar moment happens about halfway through the docudrama Just Mercy when Walter McMillian (Jamie Foxx), a prisoner on Alabama's death row, comforts a troubled friend whose execution is nigh. His advice is simple — take deep breaths — but as he speaks, director Destin Daniel Cretton inserts a shot of blue sky and trees from the opening of the film, when McMillian was free and logging in the open air. It's a simple juxtaposition, but a powerful one. For a moment, the two men share a respite and something like grace.

Just Mercy is the story of civil-rights attorney Bryan Stevenson's (Michael B. Jordan) fight to free McMillian, who was convicted of a Monroeville teenager's murder in 1988. The state's case rested almost entirely on the shaky testimony of a criminal (Tim Blake Nelson) who received a reduced sentence after implicating McMillian. Dozens of witnesses placed the defendant elsewhere when the crime occurred.

It seemed like a perfect case for Stevenson, who'd brought his Harvard University education to Alabama to give death-bound inmates the fighting chance they lacked at their original trials. But, the film reveals, the entrenched prejudice of the small-town southern judicial system was not easy to beat.

Just Mercy hits all the familiar beats of fact-based films about brave souls fighting injustice. We don't learn a whole lot about Stevenson as a person or about his colleague (Brie Larson with a late-'80s perm), the local mom of two who spearheaded the Equal Justice Initiative. Rather than multifaceted characters, they're good people doing good things.

Yet Cretton (Short Term 12) manages to avoid the gooeyness that so often infects well-intentioned movies. His style is restrained, with stirring music reinforcing our emotional reactions rather than leading them. McMillian isn't portrayed as a saint; his wife acknowledges that he cheated on her (with a white woman, which may have aroused the town's animus). Superlative performances across the board — particularly those of Foxx, Nelson and Rob Morgan as another inmate — give the story an authentic weight.

While every courtroom movie can boast lofty rhetoric, Cretton makes his best points visually: McMillian's memory of sky and trees; parallel montages of white and black neighborhoods as Stevenson drives through them. The difference speaks for itself.

So does Stevenson's silent bemusement as white Monroevilleans repeatedly urge him to visit the museum devoted to To Kill a Mockingbird, the town's claim to fame. They're eager to prove they're on the side of Atticus Finch; he's not so sure (rightly, it turns out). It's a nuance that wouldn't emerge if his character were white, as was so often the case in civil-right dramas of the era depicted here.

In its methodical way, Just Mercy paints a picture of injustice as a system rather than an accident. Everyone plays a role, from the DA to the prison guard to the TV reporter, even when they do so ambivalently or reluctantly. And it's because that system is so coercive and so encompassing that the scene of bonding between McMillian and his friend has such power. For a moment, they find a still point where they're both free.

The original print version of this article was headlined "Just Mercy"