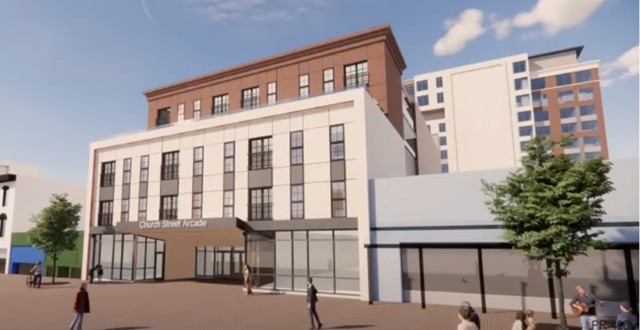 Construction hasn't yet started on the long-stalled CityPlace Burlington project, but its owners are already planning the development's second phase.

On Thursday evening, attendees at the Wards 2 & 3 Neighborhood Planning Assembly got a sneak peek of developers' plans for the buildings surrounding the infamous "pit," including what remains of the former Burlington Town Center mall and the now-vacant L.L. Bean building.

Concepts show a four-story, 15-unit apartment complex fronting Church Street and a 12-story hotel with about 240 rooms. The hotel entrance would be on a section of St. Paul Street that was severed from the city grid by the former mall. Developers have agreed to rebuild parts of St. Paul and Pine streets as part of the main CityPlace project.

Drawings also show two restaurants — one on the first floor and another on the roof — plus underground parking for about 100 cars, ground-level retail spaces and a pedestrian walkway connecting Church and St. Paul streets.

"[The walkway is] a nice connection between phase one, which is what everybody calls 'the pit' ... to get people up to Church Street," developer Dave Farrington said. "There's probably 600 or 700 people that will be living in phase one that can get directly to Church Street — to the shops and the restaurants and everything through what we know now as the main, street level of the existing mall."

Once built, the new project and the original CityPlace development would add a combined 450 new housing units to the downtown.

The partners had reportedly grown frustrated with construction delays, especially as they face a key project deadline: If construction doesn't start by September, the partners must pay the cost of rebuilding St. Paul and Pine instead of being reimbursed by the city's tax-increment financing funds.

Sinex still co-owns the buildings that were discussed at Thursday's NPA meeting. He and the three local partners also share ownership of the former Macy's department store on Cherry Street, which is the temporary home to Burlington High School. Redeveloping the Macy's building would be the third phase of the total CityPlace buildout, the partners said.

The team will soon apply for a zoning permit for this second phase, Farrington said Thursday night.