City Confidential: Weinberger Fails to Promptly Notify Officials That an Administrator Is on Leave 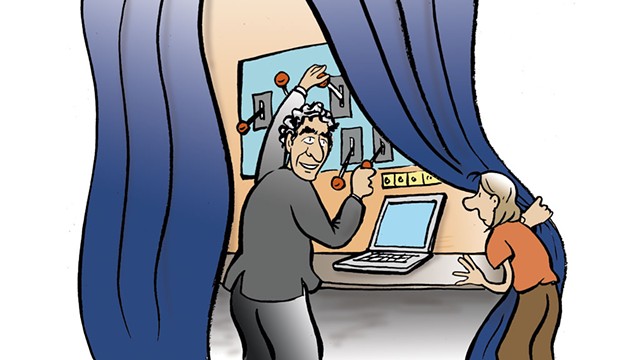 Miro Weinberger needs to do a better job of being transparent.

The Burlington mayor recently took five days to let city leaders know he'd put airport aviation director Gene Richards on paid administrative leave as part of an investigation. Two years ago, he put then-police chief Brandon del Pozo on administrative leave, and then medical leave, without explaining why. There was also the troubling case that same year of Weinberger and del Pozo trying to get the state medical examiner to drop "homicide" as the manner of death for a man who had been punched by a Burlington police officer.

More recently, WCAX-TV has called out Weinberger's administration for producing blacked-out pages of emails between the mayor and former city police consultant Kyle Dodson in response to a public records request. Seven Days had a similar experience in 2020 when it asked for emails and documents related to del Pozo's resignation.

In the most recent case, Weinberger insists that he had every intention of informing the city council of Richards' leave, which began June 30. He cited a combination of events — the Fourth of July weekend, a new acting city attorney following the recent retirement of Eileen Blackwood, the need to craft a formal letter to Richards — as partly to blame for why it took him almost a week to do so.

City Council President Max Tracy (P-Ward 2) is among those not buying that argument.

"It's as simple as sending an email saying, 'This is the status. This is what's going on. We'll provide you updates as they become available,'" Tracy said. Or the mayor could have given Tracy a heads-up when the two ran into each other downtown during the July 3 fireworks festivities.

Tracy said he heard about Richards' leave on July 5 and asked the mayor's office the next morning to provide the council information. Reporters were also asking about it. Weinberger maintains that those inquiries from Tracy and the press did not trigger him to send the council a short email on July 6, saying he already had that correspondence in the works.

What's troubling about the mayor's handling of the Richards case is that it comes too soon after the 2019 social media scandal that ended del Pozo's tenure. During that, Weinberger didn't tell the council for months — even in executive session — why he put the chief on medical leave. The reason, it turned out, was that del Pozo had created a fake Twitter account to harass a local critic, a decision the mayor blamed on "an underlying mental health condition." The year before, del Pozo had suffered a head injury in a bad bike crash.

Weinberger disputed any pattern, calling the two situations totally different. With del Pozo, he said, medical privacy prevented him from disclosing information to the public. He could have, however, told the council, which is often privy to — and legally required to protect — confidential information it learns in executive session.

There are practical and legal reasons for the mayor to inform the council in a more timely way than he has. Burlington's government structure is different than other communities'; the city charter calls for the council to govern in partnership with the mayor. The council approves the mayor's hiring and firing of department heads and is the appeals body if a department head objects to a dismissal. That means you want to keep city councilors informed about what's going on. You also want them to withhold comment if the press or public inquires, since councilors might be asked to hear an appeal and need to maintain objectivity.

There's also common courtesy. No one on a governing board, a city council or even a powerless commission should be surprised to learn the status of a department head from a reporter. But that's exactly what just happened to members of the Airport Commission, an advisory board that develops the airport budget and advises the mayor on the appointment of the airport director.

It is standard practice in the private sector for a board of directors to be informed as soon as possible when a top administrator is put on leave. When taxpayer dollars fund a position, the case for disclosure is even more compelling. An announcement, even one short on details, lets the public, employees and outside vendors know who's running the airport as interim leader.

Weinberger acknowledges second-guessing himself on how he handled the del Pozo case. But he contends that he moved "quickly" in notifying the council about Richards' status. The reasons why Richards was placed on leave would have to wait until the council met in executive session, which it did on Monday.

The investigation is about Richards' "conduct," Weinberger told Fair Game, and is likely to last weeks.

"It was certainly a judgment call," the mayor said, regarding how he handled disclosure to the council and public in the del Pozo case. While he didn't offer the reasons behind del Pozo's leave for months, Weinberger noted that he "never lied." When a reporter asked him directly about the chief's troll account, Weinberger said, he explained the reason. The mayor dubbed that time in 2019 as the most challenging in his nine years in office.

Related Redacted: How the City of Burlington Keeps the Public in the Dark

Redacted: How the City of Burlington Keeps the Public in the Dark
By Courtney Lamdin
City

"When you had an impropriety intermixed with a documented medical condition, it was a very challenging situation to navigate. I did the best I could. I tried hard to ... get it right, and I understand why there are frustrations about what happened there. And I respect why other people would be critical about it," Weinberger said.

"This is a very different case," he said of Richards' situation.

"It is often a judgment call exactly when the right moment is, certainly for public communications, as well as dramatically widening the circle of who is aware of a situation, because that can impact the integrity of the investigation and complicate our ability to figure out everything," he continued. "And it also can result in unfair damage happening to city employees, so there are other really important considerations to weigh in figuring out how to get these notices and decisions exactly right."

What's too bad is that the second-guessing in the del Pozo case didn't prompt Weinberger to pump out that short email to the council — not to mention a statement to the public — sooner in the Richards case.

That would have been more transparent.

Don't expect to see Vermont Public Radio reporters Nina Keck or Peter Hirschfeld doing hard-hitting investigative pieces on Vermont PBS anytime soon. As of July 1, the two nonprofit media outlets are now under one roof, but they're months away from deciding how they'll collaborate, particularly when it comes to adding more news to the TV side.

Scott Finn, the CEO of the newly combined TV-radio empire, said the organization wants the community to weigh in before any decisions are made. In particular, Finn said, they are looking to expand their audience beyond the demographics where he said they do well, namely with older people.

VPR has grown into a significant news source over the past two decades. Vermont PBS, on the other hand, has done little local news beyond Friday night's reporter roundtable, "Vermont This Week," election debates and legislative call-in programs. There is huge potential for cross-use of talent from the radio on a television network whose signal reaches every corner of the state.

One advantage to the lack of a local news team on the TV side is that this merger, unlike so many others across the country, will not result in consolidation and reporter positions being cut.

In West Virginia, where Finn used to work, there's a daily public television recap of the legislature, a natural extension of what VPR radio reporters are doing. But Finn said Vermonters may not want that.

"We can't try to make people watch and listen in the ways that we want them to. We have to listen. We have to figure out where they are, and then we have to follow them there," he said. It might be video on demand or other nontraditional methods. Finn expects the whole listening process to take a year.

The combined operation has a $17.9 million annual budget — dwarfing VTDigger.org's budget of about $2 million and Seven Days' budget of $4.5 million — but Finn says that figure is deceptive. Local affiliates such as Vermont PBS and VPR pay for the national programming they run. Maintaining a network of radio and television broadcast towers is also a significant expense.

While public broadcasting has been criticized for appealing to the elite, Finn wants to reach less educated and younger audiences, as well.

His desire for a broader appeal is "in my blood." Growing up in Iowa, Finn said, neither his father, an appliance repairman, nor his mother, a babysitter, were college educated. With only two over-the-air signals available, Finn and four siblings watched hours of Iowa Public Television shows. He credits educational programming — along with the public library and public schools — for why all five graduated from college and have had successful careers.

Public television "was there for us, and we need to make sure it's there for those families in the future," he said. "And that we don't accidentally become something that's not for them."

Landen plans on traveling out West before moving to New York City in the fall; he hopes to stay in media. Norton expects to travel, as well, and is unsure of his future plans. He said he has been considering a change since his father passed away last year. Good reporters and decent guys, they will be missed.

So, too, will Vermont broadcasting legend Ernie Farrar, who died earlier this month. Accolades have poured in for Farrar, who worked at WVMT radio for 50 years and was a member of the Vermont Association of Broadcasters Hall of Fame.

Farrar was also the director of the Vermont Golden Gloves and was inducted into the Vermont Sports Hall of Fame. He was 78.

Down-to-earth with a signature chuckle, Farrar was a mentor to several Vermont broadcasters, including motorsports broadcaster Dave Moody, and he teamed up for years doing morning drive radio on WVMT with Charlie Papillo.

"He loved his job," Papillo told WVNY-TV. "We had ice storms, and Ernie would still come to work. It's like, no one comes to work, and he would."