Montréal's Jean Talon Farmers' Market is a feast for the eyes, too 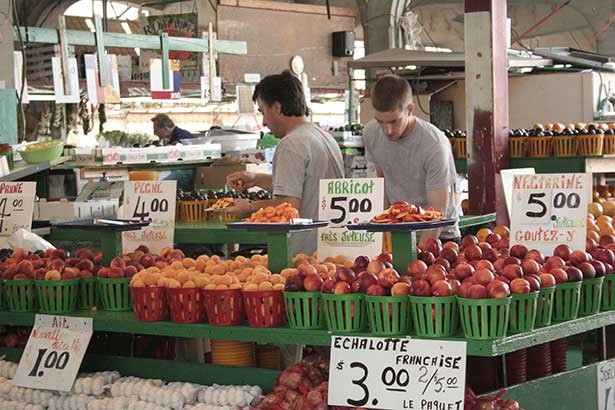 You can't beat the people-watching at Café Italia on Boulevard St. Laurent in Montréal. From the coffeehouse's small sidewalk tables, an observer can take in the city's swirling blend of color and culture: a Rasta-capped dad pushing a tandem stroller; a reed-thin, ghost-pale city girl; a man-sandaled Red Sox fan, presumably from the States; a fiftysomething Asian woman in a sky-blue business suit.

One thing unifies this disparate urban crowd: loot from the Marché Jean Talon. Grasping sacks filled with guava, pineapples, wedges of cheese and the requisite torpedoes of French bread, the shoppers spill out of one of the best open-air farmers' markets in the city . . . some say the continent.

To those who've fallen prey to the Jean Talon addiction, the place is much more than an opportunity for bag filling. Since its opening in 1933, the market has been an impromptu park: part "Where am I?" landmark for tourists, part political forum and part all-day hang-out for everyone from skateboard kids to fashionistas. Think of a circus with much better food . . . and no clowns.

Situated between avenues Casgrain and Henri-Julien, closest to the Jean Talon metro stop, the Marché Jean Talon is one of only two large farmers' markets in Montréal - the other is Atwater in the Westmount neighborhood. However, many locals feel Jean Talon represents a more faithful adherence to the "buy local, sell local" motto. Its 300-odd stalls - shaded from the sun by a roof without walls, train-station-style - overflow with cheese, meat, produce of virtually every shape and description, freshly cut flowers, fish just plucked from the Gulf of St. Lawrence, and Québec crafts such as hand-woven hats and rugs. The outside edges of the market hold restaurants, larger food stores and a raft of cafés.

Though the market resides on the northwestern edge of Little Italy, the neighborhood vibe is more Gallic than Latin, and the happiest customers are those who can at least introduce their inability to speak French . . . in French. Stylish epicurians are quick to note that the Atwater market, with its tonier locale, has more cachet these days, and for people less eager to immerse themselves in Québécois culture, its largely Anglophone location is certainly American-friendly. But that's just the point: When we go to Montréal, it's because we want to get away.

And Jean Talon has plenty of exotic tastes, including Québec favorites such as Rougemont and Mont-Sainte-Hilaire apples, lamb and pork from the Rigaud hills, and chèvre and Pied-de-Vent cheeses. Open year-round, a market of this size naturally has its share of imports, too. You can grab a Florida orange for nostalgia's sake, but really.

Fromage fans in particular have good reason to make the journey to Jean Talon. Though we have plenty of fine unpasteurized cheeses in Vermont, the market is a prime place to sample Québec's offerings. Purists believe heat kills much of the earthy texture and place-presence (or terroir) of cheese, and after a hockey-puck-sized serving of a goat's milk variety called "Tome," it's difficult to argue the point. Grassy, sharp and with a white-wine-like finish, it's a revelation. Such bliss comes with a side order of caution; unpasteurized milk is more prone to have listeriosis and E. coli passengers on board, and pregnant woman should abstain. Though there are at least a dozen great places to buy, Fromagerie Qui Lait Cru - a nifty pun that means both "raw milk" and "Who would've believed?" - has a particularly garrulous staff when it comes to answering questions.

There are few better examples of Jean Talon's emphasis on local flavor than Porc Meilleur. Supplied by a family-run farm of the same name in the Maskoutan region, its hormone- and antibiotic-free meat comes from pigs that are fed a combination of grains, yogurt and milk - the proportions are a house secret - and the results are the stuff of local legend. It's not uncommon for shoppers to come from as far as Ottawa for the bacon, and a shortage of chops can be cause for a near-riot. If veal is your thing, Veau de Charlevoix, just a stone's throw from Porc Meilleur, is just as passionate about animal raising and quality.

Les Délices de la Mer has the unofficial designation of the go-to place for fresh fish in the market. You'll know it by the number of people standing nearby eating fried fillets out of paper wrappers, eyes turned heavenward in appreciation. Les Délices sells and cooks what's in season, of course, and at the moment turbot is in abundance. A relative of the flounder, this 10- to 30-pound bottom dweller is prized for delicate (if firm) flesh and a decidedly non-fishy flavor.

More than anything else, though, what you see in the market is produce, and again, as long as the harvest lasts, local fruits and vegetables are the stars of the show. For sheer scale and diversity, start with Sami Fruit, just off the market on Rue Jean Talon South. Portage potatoes look appreciably different from their Idaho cousins, while Reliance peaches and Nova Scotia grapes put many in the States to shame.

Though these staples of Jean Talon anchor the day, the best part of the market is the unexpected. One day an intrepid shopper might find a small stall offering fresh lobster; the next, a display of crayfish; the next, kosher pickles manufactured by the remnants of the area's once-sizeable Jewish community. Each visit is different, and as you dip your baguette into a jar of brandied strawberry puree over the low notes of a Mexican guitarron, suddenly the ennui of the border crossing seems worth it.

What's the point of filling your bags with the wonders of Québec if they end up in the hands of customs agents? Crossing the border is nervewracking enough without worrying about the rules regarding the legal importation of Canadian goods, and the trouble is that these regulations change constantly. With every new potato worm, fruit fly or blight, products that were acceptable yesterday become illegal today. Generally, though, things play out like this:

Prepared items such as jam, jelly, sauce, olive oil, mustard, honey, wine and vinegar are permissible, with the very strict exception of anything containing meat. Importing a meat product of any kind is forbidden. For the sake of your stomach, and because it generally falls under the meat heading, leave the fish on your plate, too.

The rules are a bit more relaxed regarding Canadian fruit and vegetable importation than with flora of Mexico, Central America or Europe. As long as your plunder is not exotic (eat the last of that pineapple before you leave) and/or bears a "grown in Québec" label either on the fruit or on the bag, you'll most likely be OK. To be safe, don't mingle different types of fruit in one bag.

Be further advised, though, that any customs agent can decide for any reason that an item is inadmissible or exceeds the maddeningly vague "reasonable amount" rule. Don't press your luck by proclaiming your rights - you really don't have any when it comes to this stuff - or doing your Alan Shore impersonation from "Boston Legal." Smile, surrender the olives, and move on.