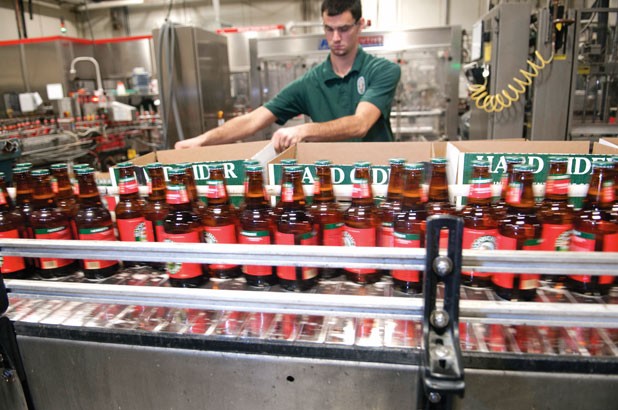 The capital of the American hard-cider business is an unassuming building tucked in an industrial park in Middlebury, Vt. Here the Vermont Hard Cider Company churns out just more than 50 percent of the hard cider sold in U.S. supermarkets. On a recent weekday, the company’s signature Woodchuck Hard Cider brew is chugging along the production line. Bottles clatter onto an automated conveyor belt and rocket through a filling station. If you want to count them, you have to count fast: The machine cranks out 600 bottles per minute.

After decades of oblivion, followed by years of unfortunate comparisons to wine coolers and hard lemonades, hard cider is back. An industry group that tracks supermarket sales reports a 25 percent increase in its sales this year, to nearly $50 million annually. Experts attribute the upswing to interest from craft-beer aficionados looking for the next brewing trend.

Racing to keep up with demand, Woodchuck plans to break ground on a $20 million facility in Middlebury this spring. Its success may even be inspiring copycats: In June, Vermont Hard Cider filed a lawsuit against its former account manager, Lenny Ciolek, accusing him of using proprietary information to start a competing business.

Legal matters aside, hard cider’s popularity is inspiring a new crop of small brewers to turn Vermont apples into craft tipples. Like wine, cider has its own goût de terroir, and that attracts today’s discerning drinkers.

Of course, “local” is a relative term. Williams says his company has to look to other apple-growing states to supply much of the concentrate; there simply isn’t enough fruit in Vermont, and most of the state’s apples are eaten rather than juiced.

Still, the Vermont brand is central to Woodchuck’s success. This year the cidery rolled out its Farmhouse Select label featuring Addison County apples — a throwback, Williams says, to the company’s early days. He started out as Woodchuck’s first salesman in 1996, five years after the business began with a beverage sold by founder and current cider master Greg Failing out of a two-car garage in Proctorsville.

Seven years later, in 2003, Woodchuck found itself on the brink of bankruptcy after mismanagement from a company in England, and Williams drafted a plan to buy it. When he took the helm, he had 40 employees and about 90 days to right the ship. Miraculously, it worked. Sales have grown by roughly 40 percent a year for the last four years. The number of employees — now hovering around 100 — is expected to grow to 140 with the expansion.

Smaller producers are learning from Woodchuck’s success in bringing cider to the masses. Cider bottles from around the region sit haphazardly on the shelves of the Champlain Orchards offices in Shoreham. They’re evidence of the company’s research into its new sideline business, says orchard owner Bill Suhr.

Suhr is tall and lanky with a mop of blond hair. A stone’s throw from Lake Champlain, his orchard packs apples year round for distribution and is well known for its pick-your-own business and bakery goods. Now, it’s known for alcohol.

“We’re trying to explore new opportunities, so that when our delivery truck gets to the store, we can go into multiple departments,” Suhr says.

That makes economic sense: Cider, hard or unfermented, gives orchards a use for blemished apples — pocked or bruised by hail, for instance — that can’t be sold in supermarkets. By themselves, those cider apples fetch just $5 a bushel, compared with $28 to $52 a bushel for apples destined for eating. Transformed into bottled hard cider, that same bushel can fetch as much as $135 (compared with just $9 for wholesale nonalcoholic cider). Of course, Suhr notes, hard-cider-making entails additional costs, including labeling, bottling and licensing.

On a damp afternoon in late December, rosy-cheeked brewer Robbie Leeds tromps in from the bottling room wearing a stocking cap and rubber boots. The Green Mountain College grad heads Champlain Orchards’ hard-cider brewing operation. He says his latest brew, the Pruner’s Pride blend, is crisp, dry and a little yeasty, and that’s by design.

“The American palate is pretty spoiled with sugar,” Suhr explains. If left alone, cider will naturally ferment to dryness, a taste more in keeping with the European style.

“We’re trying to stay true to [that] tradition,” Leeds says.

Champlain Orchards’ cider is traditional in more than taste. In colonial America, apples were far more likely to be brewed than eaten fresh, and hard cider — just “cider” back then — was the most popular beverage. Even children drank a watered-down version called ciderkin. The alcohol in cider killed off pathogens, protecting drinkers from potentially contaminated water supplies. In 1796, future president John Adams reported in his diary that a tankard of it every morning calmed his stomach.

But cider’s popularity in the U.S. was eclipsed, first by bourbon whiskey and then by beer. Cideries began fortifying their drinks with rum — and, in response, temperance societies set out to banish the cider menace. By the middle of the 20th century, “cider” was synonymous with cloudy apple juice. In the 1990s, most drinkers considered it on par with wine coolers — fizzy, sweet and generally snubbed by males. That’s changing: Today, Woodchuck’s drinkers are divided equally by gender.

Jen Abbey, who manages ice cider and hard-cider sales for Champlain Orchards, says a few of her customers fondly recall the cider their grandfathers made. For contemporary wannabe brewers, Champlain Orchards has been planting cider varietals. Future pick-your-own customers may be able to head home with a brewing kit and instructions.

Launching a commercial brewing operation, though — even a small one — is daunting.

“It’s easy to see why other orchards might not want to dive into [this],” says Champlain’s Leeds. Acquiring permits and licenses, buying equipment, and even carbonating beverages require hefty investments of time and money.

“This isn’t rocket science,” says Suhr, “but it was new to us. You learn as you go.”

“That fruit we get out of Addison County is some of the best fruit in the world,” says Woodchuck’s Bret Williams. “Those cool nights and warm days — that fruit is really unbelievable.”

And, increasingly, says Vermont Secretary of Agriculture Chuck Ross, value-added products are playing a crucial role in Vermont’s agricultural economy. What cheese is to dairy farms, cider could be to orchards.

Currently, the state’s orchards bring an estimated $20 million into Vermont each year. That’s tiny compared with the total agritourism business, which Ross estimates at $1.5 billion. “But [the orchards are] important in that they’re part of that rich palette of flavors [the state is promoting],” he says.

The agricultural appeal draws some brewers to the business. In Marlboro last summer, husband-and-wife team Jason and Lauren MacArthur began selling hard cider. Jason MacArthur came to cider by way of wine, which he says turns an agricultural product — grapes — into something “really delicate and beautiful.” He decided the obvious counterpart in Vermont’s climate was apples.

“I’d love to think that down the road there would be enough of a market [for cider apples] to make a difference for orchards,” MacArthur says.

To some extent, that’s already happening. The MacArthurs’ cidery, Whetstone CiderWorks, has been buying apples from Scott Farm in nearby Dummerston for 10 years. Early on, MacArthur says, they didn’t have much competition for the orchard’s blemished seconds. But, as interest in brewing cider has grown, he observes, so has the market for cider apples.

Brewers are quick to qualify that this latest cider “boom” is still a relatively small one. The national thirst for hard cider, albeit growing rapidly, pales in comparison with Europeans’ enthusiasm. In England, cider makes up 12 percent of the total beer category of brewed beverages. In Ireland, it’s 15 percent. In the U.S., cider is close to one tenth of 1 percent of the beer market, notes Woodchuck’s Williams.

That leaves craft-cider brewers still pretty far from breaking into the mainstream. “We’ve gone from invisible to tiny,” Williams says, “and we’re trying to get to small.”

Vermont Still Hard Cyder, from Flag Hill Farm in Vershire. A traditional English-style countryside cider (called “cyder” to distinguish it from the nonalcoholic version). Dry, crisp and complex; aged two years in the barrel. Excellent for cooking. Look for it at most natural food co-ops. flaghillfarm.com

Kingston Black, from Whetstone CiderWorks in Marlboro. Made from apples grown in Dummerston, it’s rounded out with scents of apple blossoms, citrus fruits and, the brewers say, the orchard at harvest time. Best served lightly chilled and with food. Grab it on your way through Brattleboro at a few select markets or co-ops. whetstoneciderworks.com

Woodchuck Farmhouse Select Original ’91, from Woodchuck Hard Cider in Middlebury. Light and silvery in color, with an effervescent mouthfeel. Sweet, with a fruity body and a slight natural cloudiness. Brewed from Addison County apples and Belgian beer yeast. Track it down at most major distributors. woodchuck.com

Pruner’s Pride, from Champlain Orchards in Shoreham. Made with Mac and Empire apples grown at the orchards. A “working man’s” hard cider: dry, crisp, refreshing and a little yeasty. Pick it up at the Shoreham farm market, the Middlebury Co-op, and wherever Champlain Orchards cider and baked goods are distributed. champlainorchards.com