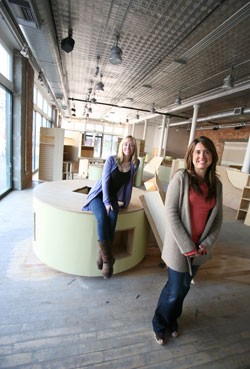 The only “great” thing about the Great Recession is that it appears to be generating a local retail renaissance on Burlington’s Church Street Marketplace. While the economy is translating into slower sales at many downtown stores, a fresh crop of merchants is setting up shop all along the pedestrian mall — even on the street’s dreaded “top block.”

So far, the economy hasn’t pinched Burlington as hard as it has most U.S. cities. “The street is doing well, and Burlington is doing well,” says Ron Redmond, director of the Church Street Marketplace merchant association. He attributes ongoing local prosperity to the city’s sizable health care and academic sectors — “two economic engines for us that are continuing to fare well.”

The Marketplace’s durable success is also due to its festive aura, which has the effect of loosening purse strings. “We’ve made it much more than just a shopping area,” Redmond says, citing $5 million in infrastructure investments over the past five years that have helped preserve the pedestrian mall’s pulling power.

Burlington’s demographics, which skew younger than the rest of Vermont’s, lured the Montpelier owners of The Getup to open a second store just off Church Street. The vintage clothing store is setting up above the former Grannis Gallery space. “We’re expanding to Burlington because that’s where our market is,” says co-owner Jeff Thomson. “There’s just such a larger percentage of people in the 20-to-30 age range there than in Montpelier.” Thomson and partner Hannah Bean intend to keep The Getup going in the capital city but expect to do more business in the Queen City with their “affordable” ’80s-and-earlier merchandise.

The Getup is sharing a lease with Riverwalk Records, which will occupy the street-level space just steps from the Marketplace on Bank Street. Jacob Grossi, owner of the vintage vinyl shop, says he couldn’t resist the chance to tap into the Burlington market with the concert posters, old music magazines and pre-digital stereo equipment he’s been selling in Montpelier for five years. When he saw a for-rent sign in the window of the Grannis Gallery earlier this year, he says, “I thought, ‘Holy Cow! I can actually get into Burlington now!’” Grossi plans to continue operating the original Riverwalk as well.

Emma Bay-Hansen is making the same journey — except she’s closing her Damsels fashion boutique in downtown Montpelier and opening next month in a portion of the former Ann Taylor space at the corner of Church and Pearl streets. “The entire time I was in Montpelier, I always knew my market was much stronger in Burlington,” Bay-Hansen says. “In this recession, my business has a better chance of making it in Burlington.”

While acknowledging the top-block location may pose challenges, Bay-Hansen doesn’t think Damsels will be in distress. She says she views the move to the Marketplace as “an opportunity rather than a risk.”

Even Church Street veterans see the downturn as a chance to improve location, negotiate deals, expand storefronts, etc. Rachel Strules, who owns Tribeca and Sweet Lady Jane, recently opened a third shop: Trinket, an accessory emporium, is on the top block opposite Borders. “If I’d waited on this opportunity, it would’ve been gone,” Strules says. Sales have slowed at her two older shops, but “I hope they’ll be coming back,” she adds.

She and Bay-Hansen are neighbors with Melissa Desautels, owner of Whim, who moved her Main Street clothing boutique to the top block of Church Street last fall. All agree that having Urban Outfitters nearby will stabilize that end of the Marketplace, which Desautels describes as a “notoriously dead zone in the past.” The former Olympia Sports store remains empty on the east side, but Redmond reports that it’s being converted into three shop spaces that “will open more opportunities for local retailers.”

Notably, almost all the new businesses on the Marketplace are locally owned. That’s not exactly a departure for the downtown shopping area. “There are already many more local than national stores on Church Street,” Redmond points out. But he does suggest that the recession may be working in favor of some Vermont entrepreneurs seeking space on the Marketplace. Given the bankruptcies of once-ubiquitous outlets such as Circuit City and Linens ’n’ Things, “Landlords may prefer a strong local tenant now over dealing with a national chain,” says Ecco’s Heath Allen. Redmond shares that hypothesis, suggesting, “A local tenant is probably more predictable in the long run.”

Current economic conditions have also motivated some Church Street landlords to make their properties more accessible to local merchants — not too many national chains are bidding up the rents these days. Heath Allen says she was intrigued by a landlord’s overture a year ago to move Ecco to the space to be vacated by Urban Outfitters. She was interested in the larger corner location but held back when the stock market started to falter. The owners of the Howard Opera House building, in which her store will be located, eventually agreed to negotiate a better deal, Heath Allen notes.

Not all landlords are giving discounts, however. “There are 40 property owners on the Marketplace and every one is different,” Redmond observes.

Larry Bohen, for example, is trying to hold out for at least the same rent he got from the owners of Smokejacks restaurant on the corner of Main and Church streets. That strategically situated spot has been empty for many months, but Bohen says he’s received “several offers from people who look at what’s happening economically as an opportunity for them.” He’s currently mulling two — one of which would earn him “very close” to what Smokejacks paid.

It would be an overstatement to suggest the Marketplace is a renters’ market, though. “Spaces on Church Street still go quickly,” says Allen. Tradewinds, an import store in the Burlington Town Center mall, “has been waiting for 10 years to get onto the street” and will finally succeed when it moves soon to a space on the College-Bank block, Redmond reports.

The landlord of the property that Ecco will vacate this spring also won’t have any trouble leasing it out, he predicts. “People are lining up to move in there,” Redmond says.