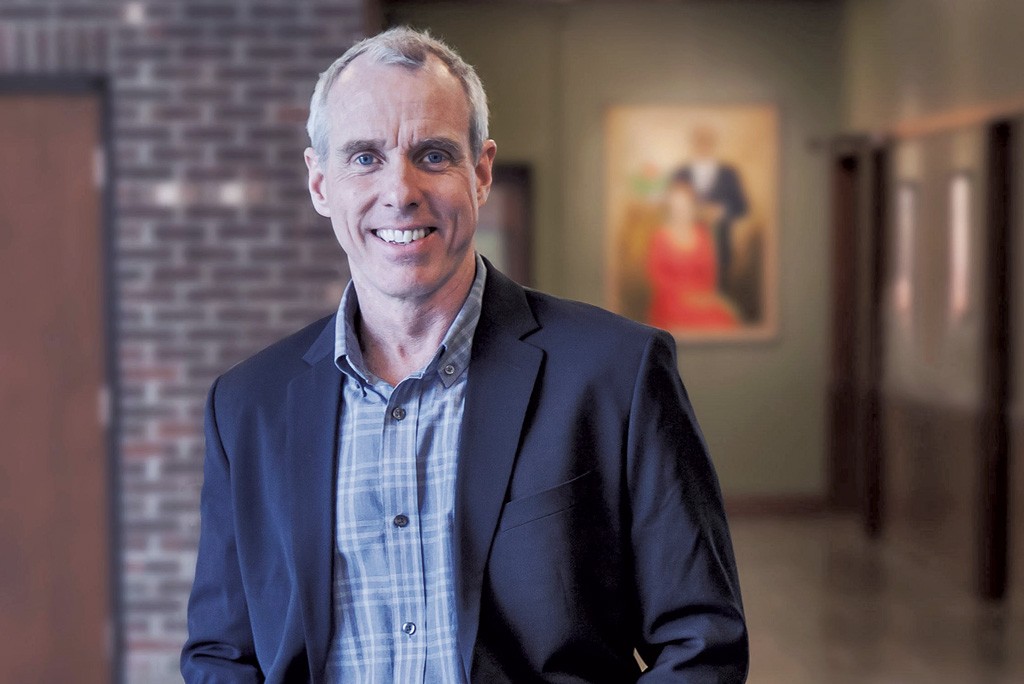 It's the best seat in the house, and it's not even in the house. Chuck Tobin's second-floor office at the McCarthy Arts Center at Saint Michael's College has a veritable picture window overlooking the auditorium. That's where the Saint Michael's Playhouse occupies the proscenium stage with four productions every summer. Right now, it's a stellar and riotously silly one: Monty Python's Spamalot.

In an interview in his neat-as-a-pin office, Tobin admits he gets emotional when the season ends. "I cry at the end of every summer season," he says. "I go from all this activity to feeling like the rug has been pulled out from under me."

It's no wonder he's so attached. This year, the 68th for the Playhouse, marks 30 years of Tobin's involvement with the Actors' Equity Association theater company — first, in 1986, as an actor; and soon after as associate producer under founders Donald and Joanne Rathgeb. Tobin became managing director in 1997, and since 2007 has been the Playhouse's first-ever producing artistic director.

Now 57, Tobin is solely responsible for bringing four productions to the SMP stage each summer. After the season ends, he says, he's a bit like the Wizard of Oz, making things happen behind the curtain.

But if the job is sometimes lonely, choosing the shows is his favorite part, Tobin says. And it's not as simple as it sounds. He starts by making a multitude of lists: "I put four show names [on paper] and visually see how they work together," Tobin explains. "It comes together after months of permutations. Then I see if I can get the rights."

He also has to find the perfect balance of shows both thematically and financially. The current season is a good illustration of that balance: It includes a Broadway show with many actors, dozens of costumes and elaborate sets (Spamalot); a new adaptation of a classic thriller (Wait Until Dark); a John Patrick Shanley romantic comedy (Outside Mullingar); and a musical bio of an iconic folk singer (Woody Guthrie's American Song). Pared-down productions for three of the shows enable Tobin to afford a whizbang season kickoff, he notes, likening that first show to "my anchor store at the shopping mall."

Tobin finalizes his show selections by October or November, he says. Then he hires his directors — and years of experience have given him plenty to choose from. "I only hire a director who I know understands how I want the audience to feel at the end of the show," Tobin says. "Once I get directors and we share the same idea, then my job is to help [them] reach their potential."

Auditions for actors, designers and other crew commence in January or February. As a member of the Council of Resident Stock Theatres, SMP has to offer a certain number of tryouts in New York City. "There are lots of regulations about how we can do things," Tobin says. For example, "If I have a cast of six, we can have one nonunion actor," he explains.

During New York auditions, Tobin and the directors see more than 200 actors in a day, for several days. "We go deep, making second, third and fourth choices," Tobin says. Sometimes he and a director will disagree on a casting choice; sometimes an actor will be unavailable for a given play. "And I have to do this for all four shows at once!" Tobin says.

Despite all the juggling, casts and crew are in place by March. Rehearsals begin just two weeks before the first show opens. "I've got to hire people who can work that fast," Tobin says.

He's not complaining, though. With a big smile, he declares himself "the luckiest guy in the world with my job."

Tobin's history with St. Mike's actually dates back more than 30 years. His first role was that of college student, class of 1980. "I did theater here and interned [at the Playhouse] after my junior year," Tobin says. "That really solidified my interest in theater."

His love life solidified during those years, too. Tobin met the woman who would become his wife, Sarah Carleton, on the very first night of college. She's now an associate professor and resident director at the University of Vermont Department of Theatre. This summer, she's directing Wait Until Dark for SMP.

Both Tobin and Carleton left the area after graduating, and ended up working for a theater company in Washington, D.C. But after touring in two Shakespeare productions, Tobin says, "I was getting bored with acting. The logistics were more interesting to me." In their non-union company, the actors had to do everything from booking gigs to making costumes. "That turned me on to the bigger picture," he says.

Tobin still entered an MFA program in acting at the Catholic University of America — as did Carleton. He dropped out after a semester. "I just realized it wasn't what I wanted to do," Tobin recalls. While Carleton finished her degree, he spent two and a half years working for various theater companies in D.C. "It was as if I assembled my own MFA program," he says.

The couple, married by this point, spent a summer teaching theater in Poland "at the height of the Solidarity movement," Tobin says. After more travel in Europe, they returned to jobs back home — both are from the Boston area. And Carleton got pregnant.

"Before we had Lilly, Don [Rathgeb] called to offer us roles in the summer," Tobin says. "Sarah did two roles pregnant." For a couple of seasons after that, he returned to St. Mike's to help out as associate producer. Carleton, who had been teaching in the New York area, took the job at UVM; the same year, Rathgeb retired (his wife had died several years earlier).

Since founding SMP, the Rathgebs had run it themselves. Now college officials decided to bring the company in-house and hired Tobin as its managing director. At first he had colleagues: co-artistic directors Catherine Hurst and Peter Harrigan, both of whom still teach in the college's theater program. But since 2004, Tobin has held the reins. His first show that year was Noël Coward's Private Lives.

"I like being the one with the vision, doing the whole creative piece," he says.

Except for his avid pursuit of outdoor activities, Tobin's life revolves around theater, a passion and career he shares not only with his wife but with his daughter. Lilly, now 28, has just earned her Equity contract as an actor, Tobin says proudly. His home away from home is his office-with-a-view; his other family the casts and crews and his fellow denizens of McCarthy Arts. And he would make even more theater happen if he could.

"If I could wave a magic wand," says Tobin, "I would direct a couple of shows during the winter, too."