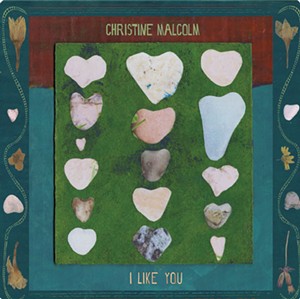 Christine Malcolm's sophomore record, I Like You, is perhaps the most aptly named Vermont release of the year. Beginning with the opening title track, the Elmore-based singer-songwriter showers the listener with unfiltered good vibes. She even teams up with human cotton-candy pop-rocker Chad Hollister on the tune, a surefire way to steep any artist's work in a radiant bath of positivity.

But the album isn't all sparkles and glorious sunshine, as the opener suggests. Like most folk albums, it rises and falls appropriately. Malcolm never takes things to an irretrievably dark place, but many of her tunes have an overcast quality. The sun breaks through the overcast sky occasionally, however, casting rays of light in the shape of songs such as "I Like You" and closer "Wooden Track Rollercoaster," a rowdy, bluesy duet with rural folk-rocker Bow Thayer.

In I Like You, Malcolm comes off like an old pro. But when her debut, Crickets, Coyotes & the Big Yellow Moon, came out in 2015, she had only recently started her career as a songwriter. Like-minded musicians flocked to her side on I Like You, such as guitarist Rudy Dauth, drummer Russ Lawton, vocalist Miriam Bernardo and producer Colin McCaffrey, who adds guitar, mandolin, piano and percussion throughout.

After the toe-tapping sugar rush of "I Like You" subsides, Malcolm doles out the charm on the warm "Honey I'm Home." Blackwolf violinist Jess Zehngut's fine fiddling provides a lovely melodic lead in the absence of Malcolm's vocals.

On country tune "Good Drunk," Malcolm and co. sing not of a person known for sipping the sauce but of the kind of intoxication free from nausea and distemper. The subject's "love is like a good drunk." It's "mellow" and makes Malcolm "giddy." Slide electric guitar, courtesy of Dauth, appropriately imparts a wonky feeling of inebriation.

Just as straightforward as "I Like You," "Sad Song" is the album's tearjerker. It vividly showcases Malcolm's vocal dexterity, by turns light and fluttery or strong and soulful. Throughout I Like You, Malcolm demonstrates a striking voice, both in terms of her actual singing and the stories she tells. From sultry, bluesy numbers such as "Maple Sugar Mama" to harmonious Appalachian folk ditties such as "Riverside," Malcolm proves an affable local talent.

I Like You is available on Spotify. Malcolm celebrates its release on Friday, September 20, at River Arts in Morrisville. She also performs on Saturday, September 21, at the Jericho Café & Tavern.