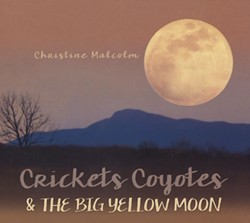 One moment on Crickets, Coyotes & the Big Yellow Moon, the debut recording from Elmore's Christine Malcolm, not only characterizes the entire record but helps explain Malcolm as a songwriter and artist. It comes on the album's third cut, the well-titled "True Hearted Girl." Malcolm coos a breathy melody while rippling banjo and arcing fiddle flirt playfully behind her, setting a familiar, rustic tone. It's a rolling, pleasant number that doesn't much distinguish itself from countless others in the Lucinda Williams school of alt-country songwriting. Until it does.

The tune gradually builds in intensity, culminating in a lively fiddle solo that comes about where you'd expect it. But then Malcolm throws a curveball, ducking into a daring bridge section that zigs when the traditional twang-inflected folk rock would zag. Over about 30 seconds, the song's mood changes, delving into a deeper emotional space than the preceding earnestness could predict. As a ringing electric guitar leads back into a more conventional tack to close out the song, Malcolm's turn is ultimately merely a detour. But it's revealing.

Malcolm, a mother and midwife, came to songwriting later in life. Among her acknowledged influences are Williams — both Lucinda and Hank — Bob Dylan, Townes van Zandt and other time-honored cornerstones of dusty Americana. For the most part, she wears her inspirations on her sleeve. But her mature, savvy distillation of influences results from a worldly, lived-in perspective. Armed with subtle confidence, Malcolm is emboldened to tweak conventions while staying true to her heart.

Though she doesn't break any molds, Malcolm finds creative ways to express herself within established parameters of folk, rock and pop. Opener "Lucky Me" is bright, catchy and heartfelt. "Emily's Bridge" is moody and atmospheric, yet just as genuine. Album centerpiece "Ancient I Love You" pairs frustrated, lovesick wordplay with impatient slide-guitar licks. The gorgeous title track closes the 13-song record with pastoral imagery, its serenity matched by the reflective calm of engineer Colin McCaffrey's arrangement.

McCaffrey deserves credit for the record's warm, glistening sheen. As a producer and engineer, as well as a versatile multi-instrumentalist, his contributions add significant depth and color throughout. The same could be said of the rest of album's players, a who's who of Vermont roots notables including Rudy Dauth, Russ Lawton, Miriam Bernardo, Jeremy Harple and Dave Keller. But a band is only as good as the songs it plays, and so, over and over again on her debut offering, Malcolm proves to be a genuine talent.

Christine Malcolm celebrates her new record with a release show at the Waterville Town Hall on Sunday, September 27. Crickets, Coyotes & the Big Yellow Moon is available at christinemalcolm.com.