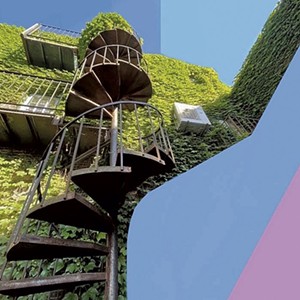 Brattleboro-based composer Chris Weisman is easily one of Vermont's most prolific musicians. The singer and guitarist, who somehow exists between the twin poles of Beatlemania and free jazz, has released more than 35 albums in the past decade, including his most recent, Pencil Crayon. Moreover, he's done so while pioneering a sort of "last man standing," lo-fi identity. He recorded many of his albums on a four-track analog tape machine before eventually quasi-modernizing with an eight-track.

It can be hard to keep up with Weisman's prolific nature. I had initially set out to review his ambient-leaning two-song album Sources in the Open Literature, but by the time I got to it, he had released five more records. In contrast, during that exact period of time, I managed to avoid renewing my driver's license, finished reading half a book and made plans to eventually watch "Succession."

Amid all that output, Weisman writes and plays with a distinctive style. His jazz-inflected guitar work and intriguing voice fuel compositions that seem to stretch across the horizon, unfettered and free to go wherever they so choose.

With his latest, Pencil Crayon, Weisman often puts down the guitar and holds the jazz, delving further into his synth playing and programmed beats to explore starry, atmospheric sonic spaces. The first three tracks — "Hard Times," "Cat Cup Flowers" and "Foss Farm" — form a trilogy within the record and build a foundation of warm ambience around melodic synth parts. Stylistically, the songs aren't so far from the work of synth nostalgia outfit Survive, best known for composing the "Stranger Things" theme.

Weisman rarely stays in one place for too long, however. On "Promise Me," he leans back into almost cosmic acoustic guitar playing. At heart, Weisman is an improvisational player who steps into the unknown with so many note choices that his music has a sense of possibility — and wild unpredictability.

The best part of the record, and Weisman's catalog as a whole, is his complete disregard for themes or flow. He might use a trumpet to hold out one long, melancholy note before moving into a section of tittering, percussive synth and searching guitar, but it all feels like the same thought experiment. Weisman's music often sounds as if he's attempting to recount a night of lucid dreaming without using words. Pencil Crayon is indeed devoid of any human voice.

According to Weisman, he writes the majority of his songs for a record in one sitting. He handles the arrangements and production similarly, preferring to work in what he calls a "compacted burst." That economy is a huge factor in his productivity, but it also informs the feel of his songs; they seem to drop the listener in medias res, with no beginning or end in sight. Weisman's music surrounds like a massive ocean at night, dark and moving and interminable.

Listen to Pencil Crayon at chrisweisman.bandcamp.com.