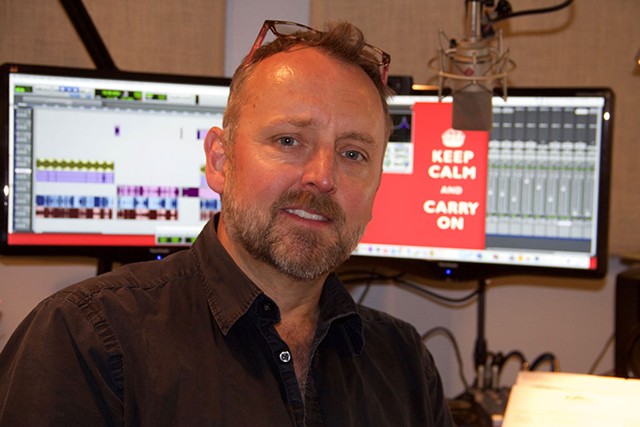 When somebody tells you, "Nobody is doing it the way we're doing it," you probably think, Well, this fellow has a healthy ego, or, Maybe this guy should google before he speaks. But when Chris Flockton says that, it's an entirely different matter. The 49-year-old Hartford transplant is not boasting or stretching the truth; he's simply telling it like it is. The creator, executive producer and host of the outrageously original live theater podcast Amy's Horse just finished its first season and, by any standard, Flockton has done it in a way no one else has imagined.

Born in Scotland and raised in the UK, Flockton lived in New York City for 16 years before moving to Vermont in 2011. A born multitasker and creative chameleon, he spent his time in the Big Apple working as a writer and actor on stage as well as big and small screens. His TV credits include appearances on everything from "Law & Order: Special Victims Unit" to "Guiding Light."

Ever in search of a new challenge, Flockton says he spent four years as a member of the New York City sketch-comedy troupe Rumble in the Red Room, and then started one of his own called the Belgian Summers. He also appeared in dozens of TV ads and narrated one of VH1's highest-rated shows, "The Fabulous Life of...", which was broadcast in more than 30 countries.

In time, Flockton added professional voice-over artist to his résumé, working for clients as disparate as BBC America and ESPN TV. Today, he maintains multiple agents to handle his voice-over work, his television career and his stints as a professional host. (Just this week Flockton emceed the International Advertising Awards at Lincoln Center — for the fifth consecutive year.)

When Flockton and his wife, Amy, relocated to Vermont, he set up a state-of-the-art studio in their barn. There he continues his voice-over work, interfacing with clients around the globe via the internet. While he was at it, Flockton decided, he might as well revolutionize American radio drama.

"What we're doing," he explains without a hint of ego, "is basically reimagining radio theater for the 21st century."

Flockton and frequent collaborator Brian O'Neill had initially envisioned the creation of a new Vermont theater company, he says, but quickly realized that ensembles such as Northern Stage and Weston Playhouse were already doing superb work in the area. Then Flockton had an aha moment: "Theater and sketch comedy were the most exciting parts of my professional life when I lived in New York," he recalls, "and, while I love the work I do in voice-overs, I was struggling to find a way to get some of that performance excitement back in my life. Then one day it just hit me," he continues, "that I could apply the same technology I use to record voice-overs for clients to recording actors performing plays."

And that's exactly what he does with Amy's Horse (so called for his wife's horse — don't ask). Think of it as live theater by conference call. From his outpost in the Green Mountains, Flockton solicits original one-act works from emerging playwrights, and then taps his connections in the thespian community to perform two short plays per episode from the comfort of their homes — anywhere in the world.

"I've asked a lot of friends and colleagues from New York and LA to be a part of Amy's Horse," Flockton says, "but I also rely heavily on friends of friends. Pick any actor you want to work with and you can be pretty sure somebody you know knows them. I'm thrilled with the caliber of talent we've had on the show."

Who else in Vermont could persuade stars such as two-time Tony Award winner James Naughton, "Falcon Crest" favorite Margaret Ladd and "The Sopranos" vet David Margulies to join him using the online collaboration tool Google Hangouts? (It allows the players to see and hear each other in real time.)

The plays themselves are an inventive mix of comedy and drama. After the digital curtain comes down, the host, playwright and actors talk about their thoughts on the performance on air, often over what Flockton calls "a refreshing beverage." The unscripted portion of the program can be every bit as entertaining as what preceded it.

And then it's to the studio, where Flockton uses Pro Tools to put together the audio files his cast has sent. "Trying to make it sound like all the actors are inhabiting the same world is a challenge," he explained, "as people are recording in very different spaces using very different equipment."

From there, the plays are edited together with some sound effects and background tones to set the scene. A 45-minute episode can take two to three weeks to put together, Flockton says.

Amazingly, not a single person involved is paid a cent. "This is art for art's sake," says the producer, though a lot of love, respect and friendship come into it, as well. Not that Flockton's business plan is to go broke pursuing his passion project. "I'm trying to attract funding and collaborators," he reveals.

Launched on July 21, 2015, the show "was produced from day one to sound more like something you'd hear on public radio than your typical podcast," Flockton says, "so migrating to radio would be a natural progression."

Eighteen playwrights and 47 actors later, Amy's Horse would seem to have a real shot at that "migration." Season two of the podcast is tentatively scheduled to debut in June.