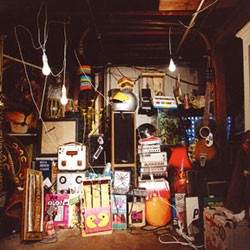 Track by track, from the undulating blues-funk strains of opener "Thick Shake" (LISTEN) to the ironically brief album closer "(All Night Long)," the disc is an exercise in sweaty sonic shenanigans. Or, perhaps, "aural pleasure"?

Take, for example, the disc's second track, which features a real live high school cheerleading team, ahem, fleshing out the irresistibly catchy chorus chants. I hope their parents signed permission slips, because that must have been one hell of a field trip. Laced with innuendo, the song, like most of the album, isn't necessarily explicit. But it sure is fun. Oh, and it's all about sex. Lots of sex.

Moving on, we have "Lazy Eyes," which features the following call-and-response refrain: "I like the girls with the extra toes. / He likes the girls with the extra toes. / This little piggy went to market, who knows where the other one goes?" I'm not sure I want to find out, frankly. The disc continues in a similar vein with tongue in, um, cheek tracks such as "Hot Sticky Nikki," "(Sweat, Sweat)," "Hey Hot Tomato" and "Boom Cha Cha."

On the surface, it might be easy to dismiss Chow Nasty's in-your-face sexuality as merely a subversive gimmick — which, in fairness, it probably is. However, the band is rarely any more offensive than, say, Sticky Fingers-era Stones or The Who's "Momma's Got a Squeezebox." (It wasn't about an accordion. Sorry, kids.)

Furthermore, the band's impossibly eclectic electro-rock funk is undeniably exciting. Whether you're a hipster, a hippie or a hustler, this shit will make you move. Find out for yourself Wednesday, April 9, as Chow Nasty lubes up Winooski at The Monkey House.