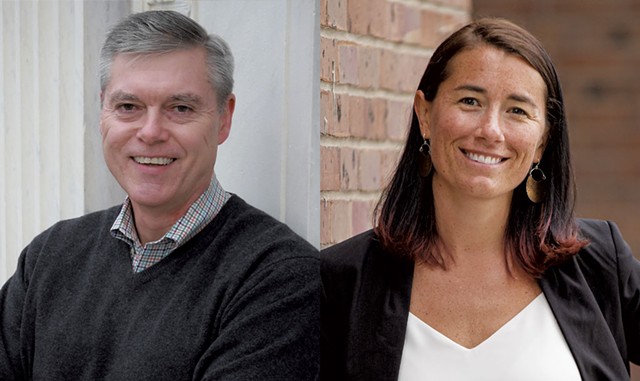 Sarah George has won the Democratic primary in her bid for another term as Chittenden County’s top prosecutor, overcoming a fierce opposition campaign that portrayed her progressive policies as a threat to public safety.

George prevailed over Ted Kenney, a Williston attorney and moderate Democrat who vowed to be tougher on offenders. Kenney conceded the race in a statement around 9:30 p.m. on Tuesday that congratulated George for her "fine victory."

She now moves on to the general election, where she will be the only major-party candidate.


George told Seven Days in a phone interview late Tuesday that she had expected to win but was nevertheless “humbled” by the broad support she received. Districts that went her way included not only those in liberal Burlington but also some of the county’s more conservative areas, such as Milton and Colchester.

Her takeaway, she said, was that the “tough-on-crime” rhetoric from her opponent didn’t resonate with most voters. “People in Vermont tend to think we’re safe from that,” she said. “What I’m imagining now is that, for the most part, people were really upset by it.”

George's comfortable victory chalks up a much-needed win for America’s criminal justice reform movement at a time when growing anxieties over crime, drug use and homelessness have left progressive prosecutors politically vulnerable even in the most liberal areas.

Kenney, a longtime attorney, entered the race at the urging of local politicos fed up with George’s performance. He quickly assembled a coalition of the discontents: business owners perturbed by retail thefts; emergency responders who felt unsupported by the state's attorney; victims of crimes who wanted their perpetrators to face harsher punishment. Even Republicans appeared to be coalescing around him.

Kenney and his supporters have argued that George’s lenient approach has created an expectation among low-level offenders that they won’t be held accountable for their crimes. Among the reforms George has enacted is an end  to cash bail and a refusal to prosecute alleged crimes that stem from pretextual traffic stops, since data shows that people of color are disproportionately affected. She’s also expanded the use of restorative justice.

Kenney said he would push for more “consequences,” particularly for those repeatedly accused of crimes.

"The first time or maybe even the second time, I think we can be compassionate, but not the third, fourth and fifth time," he told Seven Days last month. "That seems to me to be the product of a philosophy and not the facts on the ground."

George countered that Kenney’s approach would only lock up more people who suffer from underlying mental health issues, housing insecurity or substance-use disorders, without making communities safer in the long run. She said Kenney and his supporters were deploying a “targeted campaign of disinformation” aimed at scapegoating her for long-standing societal woes.

Still, in response to the challenge from the right, George chose not to temper her reformist message. Instead, she doubled down, saying at a recent forum that she had "a lot more work to do."

In his concession statement, Kenney said that he knew those who had encouraged him to run would be disappointed with the result. "I would encourage each of you who work in public safety to work with the State’s Attorney to secure public safety and reform," he wrote.


George had a similar message for Kenney’s supporters. Asked about the often tenuous relationship she has had with local police departments, she said, “I am the elected official in this situation. They are not. My hope is that right now they recognize that.”

“My opponent was very clear on his support from those police unions — and the community rejected that,” George added. “My hope is that law enforcement will recognize that this is the demand from the community, and that they will come to me and my office and continue to work with us in a way that will actually answer that demand.”