Chips Off the Old Block 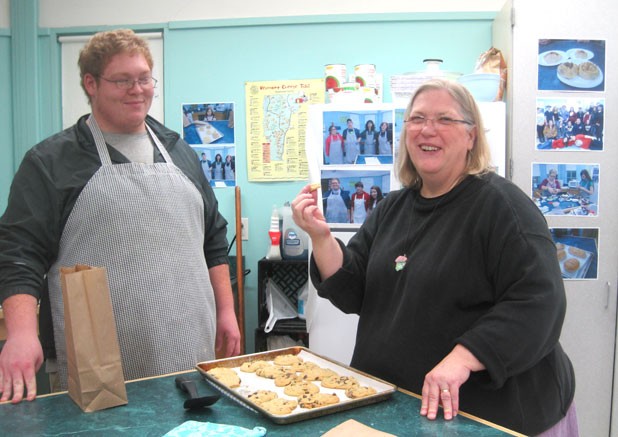 It’s 9 a.m., and a dozen students at Bellows Free Academy, St. Albans, are having cookies for breakfast. They have the blessings of their Exploring International Cuisine instructor, Patricia Bettinger, who says this isn’t much worse than the breakfasts of Pop-Tarts and Mountain Dew many of her charges report to her.

But the treats these teenagers are preparing and then eating in the Daily Consumer Science classroom aren’t your average chocolate-chip cookies. They’re following the very recipe that fueled many a Burlingtonian’s addiction when the cookies were sold at Cheese Outlet/Fresh Market, which closed last month.

Bettinger, a former employee of the business, says she’s the source of that recipe. And she agreed to share it not just with her students but with our readers.

When Bettinger joined the Cheese Outlet team in 1993, she says, then-owner Vicki Buffum sold no prepared foods except cheesecakes and quiches wrapped in puff pastry. That changed when Bettinger arrived, fresh from a job as pastry chef at Mother Myrick’s Confectionery in Manchester Center. She worked gratis for a week and took Buffum (who is now deceased) on tours to prepared-food markets to convince her that the expansive Pine Street warehouse space was perfect for such a business. Buffum took her advice, and when Bettinger left in 1998 to become a teacher, “sales were huge,” she brags.

Her BFA classes are popular, too, and not just because they give kids an opportunity to taste her famous chocolate-chunk cookies. At BFA, the discipline once known as home economics is currently down from three teachers to one, and Bettinger says her classes are overflowing with kids who want to learn to cook. Some are culinary students from the nearby Northwest Technical Center, but most are mainstream BFA students. The teacher says a number of her students have gone on to study at the New England Culinary Institute or the Culinary Institute of America.

One student with culinary ambitions is Sam Blow, one of only two girls in today’s 50-minute class. As the small groups of students prepare their cookies using stand mixers and ovens located in each corner of the room, Blow talks excitedly about landing a daylong apprenticeship in the bakery at Mirabelles in Burlington. The aspiring NECI pastry student supplements her at-home baking with Bettinger’s class and an after-school cooking club.

Though the presence of chunky flakes of salt in recent iterations of the Fresh Market cookie suggests someone tinkered with her original, lightly salted cookie recipe after her departure, Bettinger says she’s certain that Fresh Market continued to use her recipes in some form after she left the kitchen. In 1998, that troubled her, but now she’s glad to share the chocolate-chunk cookies, as well as her recipes for ginger snaps, corn salad and curried chicken salad, with students in the three classes she teaches, along with online health studies.

Her International Cuisine class has a more ambitious reach, though. The day before the teens baked chocolate-chunk cookies, they prepared tortillas from scratch to use in tostadas filled with orange-braised chicken and vegetables. Their curriculum casts a wide net over global delicacies, ranging from Ethiopian injera and doro wat to Brazilian street foods such as pasteles.

But everyone is excited to bake cookies and then pack them in paper bags to share with friends. Despite the lack of a professional convection oven, the students’ sweets come out tasting strikingly similar to those Bettinger created at Fresh Market. The class has substituted 60 percent cacao Ghirardelli chips for the St. Albans-made Barry Callebaut chunks that Bettinger preferred as a professional cook, but the switch doesn’t diminish the cookie’s chewy, melty glory.

At the end of the day, Bettinger is happy to see her students enjoying something she created. “It validates my life, and I get to pay it forward,” she says with a smile.

She paid it forward again by passing her recipe to us.

“Ingredients are crucial for these to be amazingly flavorful, so do not scrimp with the quality of vanilla — use Madagascar Bourbon, such as Nielsen-Massey — and the best chocolate you can get, preferably Callebaut or Ghirardelli,” Bettinger says.