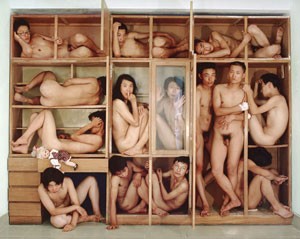 Two compelling exhibitions currently on view at the Montréal Museum of Fine Arts bookend 2200 years of Chinese culture. “The Warrior Emperor & China’s Terracotta Army” presents some of the amazing statues of warriors created for the tomb of China’s first emperor. The other show is a contemporary exhibition focused on the dynamic art scene of one of the world’s fastest-growing economies.

Qin Shi Huang (who reigned from 221 to 206 BC) was known as a brutal ruler, but he did unify China and lay the foundation for the nascent superpower of the 21st century. Farmers digging a well in 1974 hit upon evidence of Qin’s tomb, and archaeologists gradually discovered the scope of a temple complex that includes a life-size army of some 8000 figures. Five of the warriors, a statue of a scholar and two life-size horses are on display in Montréal, along with dozens of other artifacts from the period.

Each terra-cotta figure is a masterpiece. To realize that thousands of the sculptures were created simply for burial is mind-boggling. How does one fire hundreds of actual-size ceramic horses? The figures as they appear today are shadows of their former selves. Their weapons and chariots have disappeared over time, and the bright lacquer with which each was originally painted dissolved upon excavation as it met the air. The museum’s exhibit is beautifully designed; mirrors surrounding the major figures reflect each other infinitely, evoking the rows of individuals in the emperor’s army. Shipping these ancient pieces without breakage is itself a significant feat.

The modern show, “Red Flag, Contemporary Chinese Art in Montréal Collection,” reflects the current state of the visual arts in China. But all of this exhibit’s artists have developed a strong presence on the international stage, as well.

Three 39-by-65-inch works from “The Great Third Front,” a series of large-format, chromogenic prints by Chen Jiagang, are among the most riveting pieces in the show. Three beautiful women incongruously posed in a harsh industrial landscape are the subjects of “The Great Third Front — Bridge.” Chen’s compositions are impeccable, his use of colors sparse. In this image, virtually the only color comes from the women’s red scarves, reminiscent of what students wore during China’s Cultural Revolution.

That subtle reference to the abuses of Chairman Mao appears again in “The Great Third Front — Frosted Dormitory.” Three women, again looking like fashion models turned into workers, populate the scene, one each at street level and on first- and second-floor balconies of the dormitory. Chen makes use of deep perspective, which allows the building to dwarf the figures and create a mood of isolation and desolation in the urban landscape.

The Gao Brothers, Zhen and Qiang, are a pair of sibling photographers based in Beijing who’ve been collaborating since the 1980s. Their 45-by-57-inch “Sense of Space — Wake” is a chromogenic print presenting nude figures crowded together in tight boxes like curios. China is a nation of more than a billion, and in the Gaos’ image, packed-in people lose their individuality.

“Garden Rock,” from Zhan Wang’s “Floating Stones” series, is a large sculpture of burnished steel that’s both elegant and graceful. While the organic shape is reminiscent of the works of Henry Moore and Jean Arp, it more directly refers to the naturally occurring “scholar’s rocks” of China. The allusion suggests the piece is meant to be contemplative, but it’s tinged with irony, since “Garden Rock” is far from the traditional ideal, as well as more massive.

Emperor Qin Shi Huang craved immortality, and though his corpse putrefied in summer heat before its interment, the emperor ultimately achieved his goal. His massive tomb, and the nation he forged behind the Great Wall — another of Qin’s achievements — may well last forever. The visual-art sensibility in China, however, like that the world over, continues to evolve.