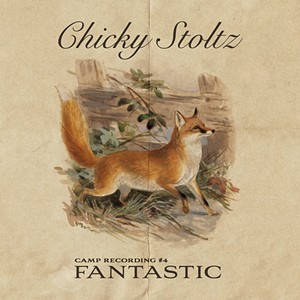 Long before the pandemic necessitated isolation, artists have been holing up in the mountains to write and record music. Self-imposed solitude sparks creativity, so they say. Most folks return to their hectic lives once the work is done, but I have a feeling Chicky Stoltz is perfectly happy to remain the hermit this publication cast him as in a 2014 review of his second album, Camp Recording #2 - The Roebuck.

Vermont is full of Chicky Stoltzes — that is, reclusive types who quietly write and record everything solo at home and rarely play live or make a peep on the internet. Yet as Stoltz demonstrates on his new LP, the perfunctorily titled Camp Recording #4 - Fantastic, his music is often just as thrilling as that of acts who gig all the time and are active on social media. In other words: Don't judge artists by their public profiles, especially when the industry keeps telling you to do just that.

Camp Recording #4 - Fantastic is an eclectic rock album with a robust Americana core. Wilco are an obvious comparison, but Stoltz does plenty to distinguish himself, such as the lounge-tastic, bossa nova opener "bed stuy suite."

Full of slinky mallets and swishy percussion, the track sets Stoltz up as a verbose storyteller. With a near-literary flair, he describes a chance encounter of two ruined people and casually draws a comparison between existential and banal anxiety: "Can't find love / Can't find anything to wear," he sings.

Through some clever vocal trickery, Stoltz becomes his own pitch-jacked choir of backup singers on "electric eye." With effective production and layering electric guitar over a faint foundation of organ, he captures live energy.

"Mining town" and "election cycle 2 (king baby mix)" zero in on the Americana-lite, gray-sky blues that Wilco so effectively produced in the 2000s. But the following cut, "orange cones," snaps into a mechanized, black-hat groove. Stoltz intermittently brandishes flashy guitar chords over the tune's sparse orchestrations.

Stoltz rides the vibe of the previous song into "friendship heights," a dark-toned, bluesy workingman's banger. The clouds part on closer "mona lisa," another airy pop-Americana jam whose mildness befits the thin, signature smile of its namesake.

Stoltz's songs are undeniably catchy, even when they don't hinge on traditionally catchy hooks. In addition to grooving along, listeners should expect to get lost in his stories and dwell on the scenes set within.