2020 was the year of the chicken. Specifically, it was the year of the baby chicken, purchased in late March by people who suddenly found themselves with more time on their hands, newfound concern about food security and a need to focus on something other than the deadly pandemic sweeping through the country. Chicks, like vegetable seeds and baking yeast, quickly became difficult to find as Americans sought activities and food sources they could control.

Such was the case for Hinesburg's Michelle Fongemie, who thought of chickens as a potential source of protein to complement her vegetable garden. "I think everyone's mind raced to the worst-case scenario," she said. "I've never been a doomsdayer before, but I know I'm not the only one who thought that."

Fongemie and her boyfriend bought 15 chicks, including meat birds.

Immediately after the chick purchase comes a new challenge. Chicks typically live indoors for their first six to eight weeks, giving new chicken owners that much time to build an enclosed coop and fenced-in outdoor run. Coops range from small and simple to large and decorative, with some chicken owners choosing to go above and beyond for their flock.

Fongemie had an advantage: Her boyfriend, Johannes Schoffelmeijer, had just moved into her house. (That was another pandemic experiment, as the two had only been dating since the fall.) Schoffelmeijer works at Lowe's and was able to buy warped or flawed lumber at a discount. He also bought windows and flooring that customers had returned to the store. After he'd come home from work and Fongemie had finished teaching high school English online, they'd work on the coop.

"It gave us both something to do," Fongemie said. Schoffelmeijer focused on the build itself, while she painted the frame green, blue, red and yellow to match her house.

"It was a good mix of the creative and the craftsman coming together," she said.

The chickens moved out of Fongemie's guest bedroom and into the coop last May. A month or so later, the couple got engaged. Building the coop had helped them realize they were ready to build a life together. "It is the coop that love built," Fongemie said. "We just went all in."

Though the desire for cuteness might be front of mind for some coop builders, making the structure work for the chickens requires a lot of practical considerations. Fongemie and Schoffelmeijer had to add in heated water pipes so the birds could still drink in the dead of winter. Another concern is security, as foxes, raccoons, hawks and weasels have all been known to go after chickens.

In Burlington, Lyn Severance took no chances with the chickens she bought last year. The wire that encases her coop and run stretches underground so wily predators can't dig their way in.

She also added some aesthetic touches, including a chicken whirligig on top of the coop and polka dots on the wall. A friend passed along a vintage stained-glass-style window in a frame, which Severance hung from the ceiling of the run, repurposing it as a roost where the chickens perch at night.

Severance loves to spend time in the coop. She sits on a milk crate and reads to the birds. "It's an opportunity for me to read poetry and be with my chickens at the same time," she said.

While many coop design decisions are made with human viewing in mind, Severance also painted a blue, cloud-dotted sky on the inside ceiling of the coop — reminiscent of her graphic design work for Ben & Jerry's years ago. Unless people know to poke their head in and look for it, only the chickens will ever see it.

Deborah Kehoe and David Yergeau also have a colorful coop in their yard in Charlotte. The run is built from white-painted lumber and has a pink door and window trim. Window boxes with flowers are mounted on the outside. 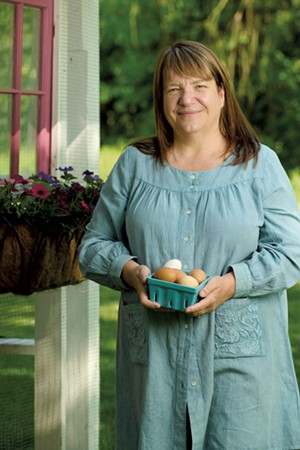 "I just thought it had a real Barbie doll look," Kehoe said. The couple has raised chickens for five years, but this coop was a pandemic project. They sourced the vintage barn door from Craigslist; it complements their home, which was originally built in 1790 as a general store. There have been hiccups: Yergeau once accidentally locked himself inside the run. He spent two hours inside before finally crawling out through the coop's nesting boxes — the narrow spaces where the chickens lay eggs can be accessed from the outside by a swinging door.

Coop security is important, though it's nearly impossible to protect the hens against certain predators. Steven Higgins and Larkin Wellborn of Moretown reported that a bear tore apart their coop last month. Three of their five hens were lost. But they're adding electric fencing and rebuilding what they call "Cluckingham Palace." 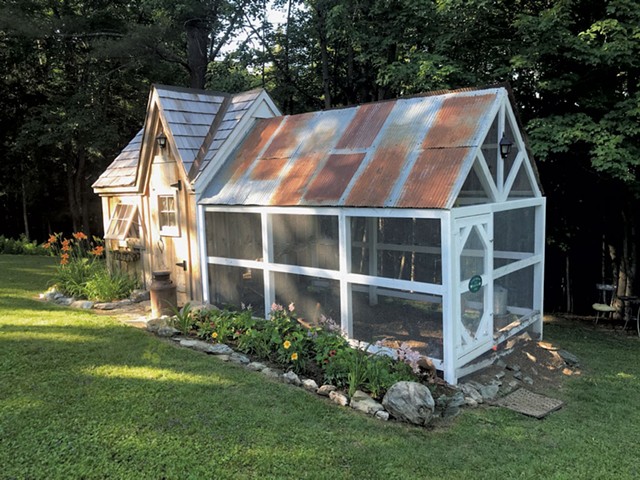 The coop is a repurposed children's playhouse from Jamaica Cottage Shop, a Vermont-based outbuilding manufacturer. The couple added a run with an old tin roof, screens in the windows and gardens around it. Strangers stop to take pictures, and the chickens are all named after British royalty.

In terms of the money saved on egg purchases, backyard chickens rarely seem to pay off. But chicken owners often take delight in their birds, citing their quirky presence and unique personalities as reward enough for all the hard work. Hens may live for a decade but lay eggs only for the first five or six years; humans with attachments may let these "retirees" hang around long after they're technically productive.

When it became apparent last year that the world wasn't ending, Fongemie decided not to eat any of her chickens. She collects eggs, including one nearly every day from a chicken that insists on laying it right by the front door of Fongemie's house.

"Chickens have become an unusual source of entertainment for us this year," she said.