Last week was a big one in national fried chicken sandwich news. On February 24, McDonald's rolled out its new crispy chicken sandwich, becoming the latest chain to scratch its way into the chicken sandwich pecking order. A taste test in Business Insider declared the new offering "almost identical" to Chick-fil-A's version, which is generally credited with kicking off the tender trend.

But why drive to Plattsburgh, N.Y., and support the morally decrepit Chick-fil-A chain — with its history of charitable donations to anti-LGBTQ organizations — when there's a local version that has all the fast-food options beat? Enter Chic Full Gay.

"It's taking on Chick-fil-A for being homophobic, pointing the finger." Bryan Gildersleeve tweet this

The perfectly named pop-up is the work of Bryan Gildersleeve, the chef at Burlington's St. Paul Street Gastrogrub, which hosts Chic Full Gay twice a month. When Gastrogrub closed in December 2020 for renovations, Gildersleeve, 32, looked for an income source. Early concepts included Piled High Stoner Sandwiches and Let's Get Smashed Burgers & Fries, but the one that ruled the roost was Chic Full Gay.

"I had no idea it would blow up so hard," Gildersleeve said with a laugh. "But I have a passion for chicken sandwiches — always have — and it's taking on Chick-fil-A for being homophobic, pointing the finger."

While lots of chicken sandwiches are available around town, Gildersleeve pointed out, a focus on chicken is unusual. Chic Full Gay offers three sandwich variations and a smattering of sides, snacks and sweets.

The OG sandwich — with "shrettuce," housemade dill pickles and buttermilk aioli — stays the same from pop-up to pop-up; the spicy and the deluxe versions rotate toppings. (All of the sandwiches can be made vegan with a substitution of fried oyster mushrooms from St. Albans-based FUNJ. Shrooming.) Each sandwich comes with a full potato's worth of ultra-flavorful barbecue potato wedges. 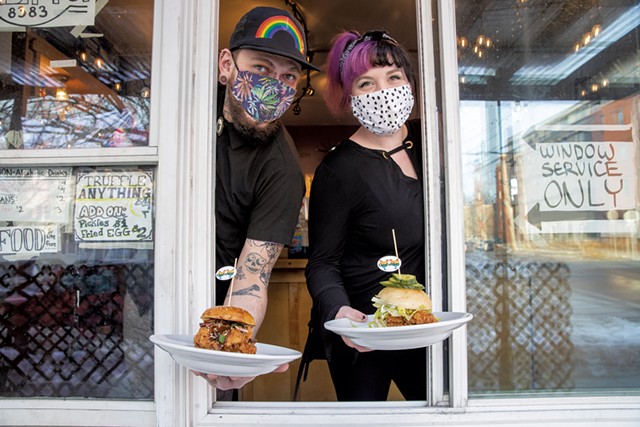 For my first Chic Full Gay experience in early February, I went for the deluxe. The fermented honey mustard caught my eye, along with candied bacon, cheddar cheese, shredded lettuce, tomato and "quickled" red onions.

Gildersleeve (who uses gender-neutral pronouns) is big into fermentation and preservation; their experimentation in that realm, evident throughout the menu, will be a big part of the restaurant they eventually hope to open. The honey mustard combined a sweet-savory fermented garlic honey with mustard and mayo for an extra-punchy take on the classic dressing.

Besides being packed with flavor and perfectly cooked — crispy on the outside and juicy in the middle — this chicken sandwich was the biggest I'd ever seen. Fair warning: These things are huge.

"I like a nice fat piece of chicken," said Gildersleeve, who was head chef at Citizen Cider for several years and worked part time at Misery Loves Co. before taking over at Gastrogrub.

Gildersleeve cuts the pointed ends off the chicken breast before butterflying it and taking the Southern-style approach: buttermilk, pickle juice, smoked paprika, garlic and dill. Rather than add salt to the brine or the dredge — a gluten-free combo of rice flour and potato starch — they season the chicken when it's fresh out of the fryer.

Gildersleeve saves the pointed chicken ends for a community dinner at the end of each pop-up, offering free fare to 25 to 30 homeless and food-insecure people in the area. "That's been really helping my mental health state during quarantine," they said. "Helping people."

Chic Full Gay's community contribution goes beyond the free dinners; it has raised more than $800 so far for the Pride Center of Vermont. The next pop-up, scheduled for Monday and Tuesday, March 8 and 9, will also benefit the Burlington-based LGBTQ+ community center.

The upcoming event is a collaboration with Black Rose Briar, Sarah Howley's gluten-free bakery (see below). "We're going to blast Queen and hand out condoms and dental dams [provided by the Pride Center] and chicken and cookies," Howley said. "I don't think there's a better night, honestly."

"I want to support my friends and grow their business models and their brands with my brand," Gildersleeve said. "It's evolved into this whole community thing."

"Obviously, Chic Full Gay is very queer-oriented," Hood of Arcana Botanica said. "A lot of us are coming together to sort of be ourselves and be out there within the community, while also serving people food and drinks and having a lot of fun doing it."

More popular than ever, the pop-up model seems uniquely suited to the pandemic-era challenges of the food-service industry. As restaurants limit hours or close altogether, their spaces become available to industry pros eager to try new concepts.

"A lot of us lost our jobs [during the pandemic], and we saw this as an opportunity to finally start our own business. But there weren't a lot of options to do that," Howley said. "Bryan has provided a connection with Gastrogrub and used those resources to support us in any way that we need."

Liza O'Brien, Gastrogrub's owner, rents the space to Gildersleeve for just $200 a month, which keeps overhead low. "Pop-ups give the power back to small people who have good ideas but don't have the capital to get their own brick-and-mortar yet," Gildersleeve said.

Gastrogrub reopened on February 25, offering takeout Thursday through Saturday. Chic Full Gay will continue to pop up twice a month, selling "the gayest chicken possible" on days the restaurant is closed.

The pop-up will continue fundraising, taking new businesses under its wing and creating a welcoming, community-focused event. "We can't be hating on people for dumb things like sexuality or race or gender anymore," Gildersleeve said.

With sandwiches like these on the scene, we can't be putting up with lackluster chicken, either. 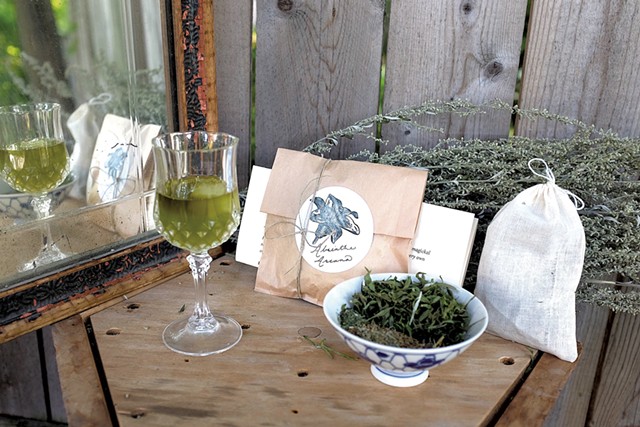 "It's really gratifying for people to be able to make something and then ingest it," said Ian Hood, who launched the "botanically forward" infusion kits in fall 2020. "I wanted to make them as simple as possible for the person who had absolutely no idea what they were doing, but also cool enough and edgy enough for the booze nerds."

Hood, 42, had been developing recipes for bottled liqueurs for a few years when he decided to offer the kits as a way to bring in revenue while developing the next stage of the business. They're sold on Etsy, at Burlington's Mad River Distillers tasting room, and at the Chic Full Gay and Deli 126 pop-ups (with discounts for local purchasers).

Arcana Botanica's absinthe, fernet and bitters are designed to fit well in their traditional categories, with a distinct local twist. Hood sources most of the dried herbs from Railyard Apothecary, supplementing them with wildcrafted ingredients such as cedar, hemlock and usnea.

Hood and his business partner are in the process of setting up a contract-distilling license with Shelburne's Wild Hart Distillery. They hope to have bottled products available soon, starting with the fernet and eventually including other amari, as well as apéritif and digestif liqueurs. 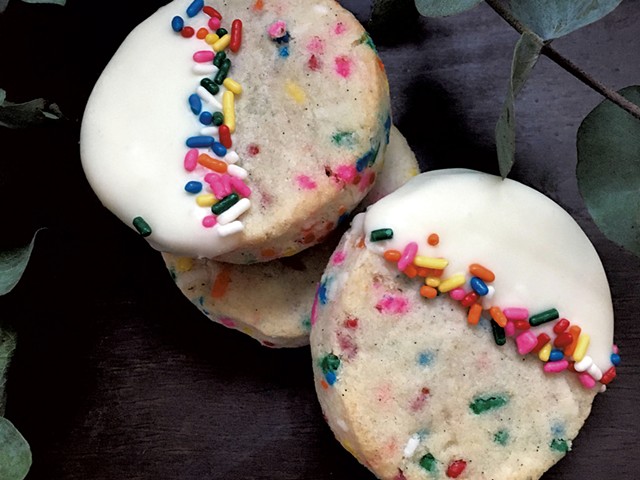 "I've been a pastry chef for about a decade, and I was really taken by that prompt," Howley said. "I decided that was going to be a pinnacle of my business." With her gluten-free baked goods, she raised hundreds of dollars for various causes, including the opening of Burlington's Café Mamajuana.

Howley, 29, works part time at Maria Lara-Bregatta's Dominican fusion restaurant, where she'll rent the kitchen to scale up her production as she relaunches Black Rose Briar's website for orders on March 15. She hopes eventually to make the business her full-time job.

Howley is committed to making high-end pastry, despite the challenges — and reputation — of gluten-free baking. It's partly a personal mission: At her second job after completing culinary school, she started having reactions to flour.

"I just found jobs working with chocolate and things that are gluten free," Howley said. "It's something I physically have to do to continue my career."

Gluten-free baking has come a long way, she said, thanks to developments in science and ingredients, particularly King Arthur Baking's gluten-free products. Howley makes custom cakes and soft, elegant shortbread cookies in creative flavors. She plans a rainbow cake and Pridefetti cookies for the Chic Full Gay pop-up on March 8 and 9.

Chic Full Gay pop-up, Monday and Tuesday, March 8 and 9, 3 p.m. until sold out, at St. Paul Street Gastrogrub, Burlington. Call 540-8383 or order in person at the walk-up window. Follow @chicfullgay on Instagram for details on upcoming pop-ups.