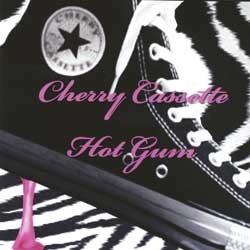 I have a confession. When I first loaded Cherry Cassette’s debut Hot Gum into my stereo, I didn’t get it. I had high hopes, what with all the pink and zebra stripes on the cover. But after about a song and a half, I couldn’t help but think, Um . . . what is this? The whole thing just seemed over the top. Seemingly devoid of rhyme or reason, each song jumped to a new genre and different vocal styling, from falsetto to rap. The band’s tunes brought to mind some of Burlington’s favorite iconic ironics: Led Loco, Amadis and even Party Star. But without seeing CC’s live show, I couldn’t be sure. Is it supposed to come off this way?

I decided to do some research and checked out the music video for “Disco,” the album’s opening track. Sure enough, the single — complete with Jet Jaguar’s dangly earring, the neon lights and a crowd of girls fighting boys to the ground in lustful fury — assured me of the band’s tongue-in-cheek attitude. Why the members’ pseudonyms — Jaguar, Jimmy Pointless, Ladyfingers Henderman and Sparks Douse — had not tipped me off, I am not sure. So, with new perspective, I returned to the album. And as Jaguar crooned on “Heaven in a Handbasket,” I couldn’t help but admit, Well, I think I get it now.

At their best, Cherry Cassette remind me of late D.C. punkers Q and Not U: fun, catchy and danceable. At their worst, predictable guitar riffs and wailing vocals bring to mind radio-ready nü-metal. The band would be better served embracing Jaguar’s vocals and letting Jimmy Pointless take second tier. Both singers are talented, but Jaguar’s tracks seem to better demonstrate what Cherry Cassette have to offer. After all, this isn’t a variety show. Cohesion could be a great improvement.

Despite their jesterly image, Cherry Cassette have serious game when it comes to the music biz. With the help of manager CT Turgeon, the band has, in a short period of time, released a well-produced album, completed two music videos, and secured multiple shows at Higher Ground. That’s more than can be said of most new Vermont bands.

Cherry Cassette will perform next Wednesday, July 23, at the Higher Ground Showcase Lounge as part of the Northern Exposure summer series. I have a feeling the live show is where this band excels. And I plan to be there — keeping an eye out for Ladyfingers’ fingers.