Chefs Talk About Cooking With Spirits

In 1895, when a young French waiter named Henri Charpentier splashed brandy into a pan of crêpes intended for future king of England Edward VII, the pan erupted in flames — and Charpentier inadvertently introduced flambé into modern cooking.

Or so goes the story, which may be apocryphal. Either way, for most of us, cooking with alcohol is limited to deglazing a pan with white wine or splashing sherry into a pot of soup. But on a recent frigid Monday night in Hardwick, chef Harrison Littell of Claire's Restaurant & Bar demonstrated a third way to use booze in the kitchen.

At the request of his neighbor, Todd Hardie of Caledonia Spirits, Littell rolled out a meal that not only was sourced almost entirely in Vermont but also incorporated Caledonia's Barr Hill Gin or Vodka in every course — often in multiple ways.

For a delicate onion-cheese galette, Littell seared the allium in fat "to bring out the sugars," he told diners, before adding Barr Hill Gin to the poaching liquid. "Then I flamed off the alcohol, leaving a nice, bitter spice flavor." He combined the onions with whipped Cellars at Jasper Hill Landaff and Alpha Tolman cheeses before folding the spiked mixture into galette pastry.

It didn't stop there: Littell tossed Pete's Greens sprouts in a rosemary vinaigrette spiked with Barr Hill Vodka (see accompanying recipe) and anointed each mini-galette with the dressed sprouts. "I had cooked the vinaigrette down until, again, it just left the bare essence [of the spirit], a slight perception on your tongue," he said later.

For his entrée, Littell poached brown trout (raised at Wheelock's Mountain Foot Farm) in gin- and herb-laced bouillon, then served the fish over silky parsnip purée and an earthy mound of sautéed chard. He drizzled the entire thing with a beurre blanc that was also gin-enhanced. As a garnish, Littell crisped the fish's skin into a coral-like "trout bacon." For dessert, he plated a magnificent curl of crisp Pavlova in a jammy pool of warm blueberries kissed with gin and Caledonia Spirits Elderberry Cordial, then finished it with a drizzle of lavender-blossom syrup.

Despite the ample booze in each course, the alcohol was hardly detectable — just a snap of acid here or a hint of juniper there that somehow seemed to elevate the other flavors. Since alcohol evaporates at a lower temperature than other liquids (173 degrees Fahrenheit, versus 212 degrees for water), most of it burns off, Littell pointed out. Alcohol is also a molecular wonder in cooking: It binds with both the water and fats in food so that it accentuates aroma, tenderizes protein and increases depth of flavor, even if most of it has evaporated by the time a dish hits your plate.

Yet, because of alcohol's volatility, it can quickly overwhelm a dish if not used sparingly. "As you learn in kitchens, you can always add more, but you can't take it away," observed Douglas Paine, chef at Burlington's Juniper and a frequent wielder of spirits in the kitchen, whom I called a few days after the dinner at Claire's. 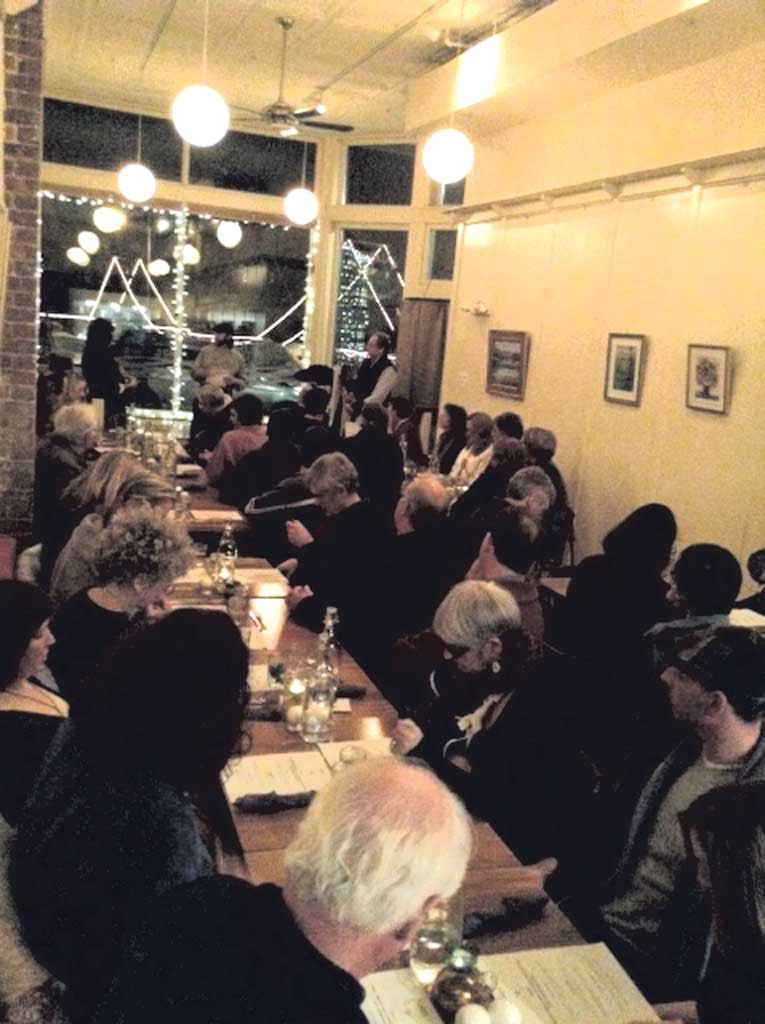 Though many people would rather sip expensive gin or vodka than use it in their dinner, such preparations require only a tiny amount of booze. "They [spirits] can be great ways to enrich a sauce or extract flavor," said Paine, who uses them in marinades, sauces and flambés. "Any time you use liquor, the alcohol evaporates quickly and, when it burns off, you get the pure flavor of the product."

Gin is a key ingredient in one of Juniper's signature dishes, a pan-seared juniper-roasted quail, which Paine currently serves over caramelized apples and turnips with a hazelnut gastrique. He also drizzles gin over salmon to help cure it, which, he said, adds a "raw gin flavor" to the final product. Last summer, he crushed plum pits and added them to local vodka, then let the mixture sit for a few months to create an intensely flavored extraction. "It's great in fondue," Paine said — and can substitute for decent kirsch, which he's had a hard time finding in Vermont.

Not all spirits cook up gracefully, though, at least at first. Paine recalled trying out rose brandy given to him by chef Steve Bogart when Paine worked as the sous chef at Waterbury Center's Michael's on the Hill. "It had a really intense flavor, and the first few times we used it, it was overpowering," he said.

Littell had a similar experience with sambuca. "One time, I tried to make a glaze with it, and [the glaze] turned out extremely astringent and bitter," he said. "Like every other experience in this industry, it's trial and error."

Because of alcohol's extreme flammability, Littell and Paine advise home cooks to use spirits gingerly — deglazing with alcohol can result in disaster if not handled with care. "It's pretty impressive how explosive it is," said Paine. "Flambés are cool in a professional setting, but kind of scary at home."

Paine advised turning off the heat source when deglazing with gin or other spirits; once you add the liquor, wait until it stops bubbling to put the pan back on the heat. Littell's tip: Microwave the liquor until you see vapors, then add it to the dish.

At that Caledonia Spirits dinner at Claire's, every dish had layers of beguiling flavors, and each paired magnificently with the "restorative" gin cocktails mixed by the other guest of honor, Warren Bobrow. The spirits writer was in town to visit Hardie and sign copies of his first book, Apothecary Cocktails: Restorative Drinks From Yesterday and Today. By the end of the meal, as we finished off our Thai Gin Fizzes, it would be fair to say we had partaken of booze all night — yet not a single person swayed as we rose to exit.

"A Hearty Winter Meal & Restorative Cocktails with Warren Bobrow" was part of a winter dinner series at Claire's that focuses on local products and people. The next dinner, "An Evening With Eden Ice Cider," is Sunday, February 23, at 6 p.m. (cocktails at 5:30). The four-course meal will incorporate and be paired with cider. $65 per person. Info, 472-7053. clairesvt.com


Steep the rosemary sprigs in vodka overnight. The next day, combine vodka, rosemary sprigs, Banyuls vinegar and honey and bring to a simmer over low heat, stirring to blend. Remove from heat and allow to cool.

Add this mixture to a food processor with shallot and mustard and blend thoroughly. On low speed, slowly dribble in the oil until vinaigrette is emulsified. Using a thick sieve, strain out larger rosemary parts so that only light specks of the herb remain. Salt and pepper to taste, then drizzle over greens and serve. Extra dressing will keep for up to a week in the refrigerator.