Chefs Speak to the Art of Plating Food

The image is arresting: prosciutto, pink meat lined with creamy fat, spread flat on a circular white plate; on top, thin slices of horned melon, its seeds splayed out like a star; a sprinkle of pepinos, striped fruits shaped like miniature footballs. Small flowers and baby beet leaves bring even more color and delicacy to the array.

The image, and the food arrangement, is the work of Doug Paine, chef of Juniper and of Bleu Northeast Seafood — both at Hotel Vermont in Burlington. For years, he's been developing a style of plating that stands out. It's elegant and intricate without looking contrived or overdone.

Paine worked his way from Mr. Pickwick's in Stowe — where throwaway garnishes consisted of ruffled kale leaves and orange slices — to Michael's on the Hill in Waterbury Center. There, over a decade, Paine played with plating techniques and refined his style. His photos from the end of that period reveal a deft hand with ingredients: a rectangle of rabbit terrine scattered with frilled lovage leaves and the crimson petals of wild bergamot flowers, a slice of pickled tongue with spruce tips and mushroom confit. 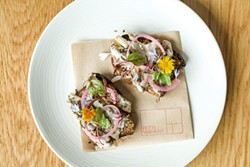 Now, Paine crafts entrées, small plates, fun sandwiches and snacks at Juniper — think rabbit-and-foie-gras meat pies with tomato-bacon jam, green pea soup with smoked pork jowl and buttermilk, and deep-fried Scotch eggs wrapped with Merguez sausage. He serves slightly more restrained dishes at the quieter and more refined Bleu. At both restaurants, the dishes Paine sends to the table are beautiful, and his style is so recognizable that his plates could be picked out of a crowd.

"In the culinary arts, the plating is really the artistic part," Paine says. "Everything else is technique and skill. It's not until you're putting the food on a plate that it becomes an expression of how you feel, and what you want the dish to say."

Like all art forms, plating changes with time. Just as you can discuss modern versus contemporary architecture, you can talk about changes in the way that food is arranged on plates. That's particularly true at restaurants where chefs have the time and the cash flow to do more than ladle courses onto serving vessels.

As public interest in food has grown, and with the rise of celebrity chefs and competitive cooking shows on television, the new culinary stars demonstrated how they could bend ingredients to their will. They turned liquids into solids using a technique called spherification. They used "meat glue" to stick ingredients together in unnatural ways. Those techniques trickled down to more quotidian restaurants, as cooks got excited about replicating what they were seeing on TV.

In the 1990s through the aughts, it was common to pile ingredients into towers in the center of the plate. (God forbid the server disrupt the stack on the way to the table.) Sauces were drizzled from squirt bottles. Powders were tossed around the plates' rims.

And then the pendulum swung. These days, thanks to the influence of restaurants such as Alinea in Chicago, Ill. and Noma in Copenhagen, Denmark, food is frequently plated in a way that looks artfully natural. Some dishes appear as tableaux that you might stumble across on a walk through the woods or along a beach: a scattering of seaweed, a handful of whelks in their shells, broth to represent the sea. Edible flowers and whole herb leaves — rather than ones that have been minced into submission — add color, flavor and style.

What does he like? Serving food on plates that have a matte finish and perhaps a little texture rather than a glossy sheen — or even on wooden boards. And he appreciates the way that "the plate has become a canvas" in contemporary cuisine.

As surprising as it may seem to those who have seen Paine's food presentation — in person or on Facebook or Instagram — the plating isn't part of the initial conception of a dish. "When we come up with dishes, we never think about how we'll present them," he says.

The way he presents a bowl of soup, a seared scallop, or a tangle of fresh greens may change over time, or even from plate to plate. "It's always pretty fluid. [There are] differences in the size of vegetables and in the way a sauce hits the plate, so that is going to affect the end result," Paine explains. Additionally, he never gives appearance primacy over substance. "Flavor and color are always together," he insists.

Do similar rules of plating apply at more casual eateries? They do indeed, says Charlie Menard, who, like Paine, grew up in Vermont. Menard is the chef at the Inn at Round Barn Farm in Waitsfield and co-owns Canteen Creemee, a way-above-average snack bar and ice cream stand in the same town.

Menard believes that plating is nearly as important at his fast-food joint as it is at the restaurant. "What we do at the Round Barn is fine dining, and a fair amount of thought goes into making sure the presentation and the flavors and the texture are all going to contrast but complement each other," he says. "A lot of that carries over to the Canteen."

One example: constructing an ice cream sundae. "I want to make sure there's something fresh, as in fruit. Is there a sauce? Is there something salty? Maybe a little pecan?"

Same for the fried-chicken dinner with corn pudding, which is garnished with fried parsley and pickled cauliflower. "I need to have those colors and flavors to contrast [the meat]," Menard says. 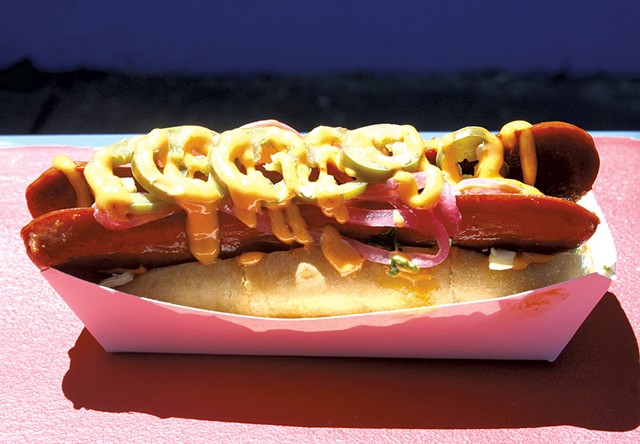 Patrons might be paying less attention to plating at Canteen than they do at a fine-dining restaurant, but perhaps not. With the rise of Instagram, Menard says that his patrons nearly always have their cameras out while they eat, snapping shots even as their ice cream melts and drips onto their hands. Every dish, he says, "has to be photo ready. All of them."

His staffers, too, enjoy rising to the challenge. "It's part of the training, to be sure," Menard explains. "The young people we work with are outstanding people who care."

Even when the food is presented in brown cardboard boxes, Menard gives it style: A hot dog is cut in half lengthwise and nestled in its bun, with pink pickled carrots and slices of jalapeño adding bursts of color. A blueberry creemee comes in a waffle cone with cookies, spoonfuls of wild blueberry jam and a sprig of mint. Another one features maple ice cream, cookie crumbs and a cloud of maple cotton candy.

But as playful as he gets, Menard thinks that some chefs take things too far. He's not a fan of plating on slate, which has a texture that grates against the fork. He doesn't like to see food on the rim of the plate. And he's not excited about food plated in whimsical objects that weren't designed for the purpose.

"It's up to us as artists to adapt and make things nice," Menard says, "but give me something plated in a toy truck and that's just not going to fly."

On the other hand, a little foam here or there is A-OK.

Mostly, says Menard, it's about organizing ingredients in a way that distributes them appropriately and ensures that customers get bite after delicious bite — and, of course, that the food is aesthetically pleasing with a "layering of colors and flavors.

"You want to put yourself in the place of the person eating it," Menard suggests.

When Paine is cooking, his goal is not to worry much. "My strategy is always to go with what's available ... it's always gotta be fun," he says. "You can never take anything too seriously. If you think organically and plate organically, you're more in touch with the ingredients, and you can let them fall where they may. Anything that's cooked well is going to be beautiful on its own."

The original print version of this article was headlined "Culinary Art"