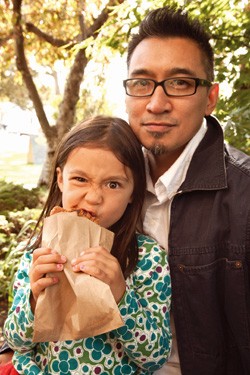 Being a chef is grueling. The long hours, sweaty nights in the kitchen and hurry-up-and-wait stress are enough to drive most sane people to drink — or to find another career. Add kids to the mix, and even the most dedicated culinarians may begin searching for other options.

For a chef with a family, stability matters, and restaurants can seldom provide it, especially in the seasonally changeable Vermont economy. But a college town such as Burlington has a built-in market of hungry mouths that belong to students earning their degrees.

More and more top-flight chefs are recognizing the appeal of the reliable hours and benefits they find when they head to the dorms. The image of the hairnet-sporting lunch lady may soon give way to that of a toque-wearing, high-end chef or a tattooed technical wizard.

Kate Taylor Hays of Dish Catering is one of the newest chefs to join the club. As a brand-new catering chef at the University of Vermont’s Dudley H. Davis Center, she works under John Brandes, former chef at the Burlington Country Club. “I’ve never seen anything like it, and it’s a well-oiled machine,” Hays says of his kitchen. And that’s after 30 years in the business.

What’s it like going from the kitchen to the cafeteria? We asked three UVM Sodexo chefs to find out.

Ever wonder what happened to Christophe Lissarrague, chef-owner of the now-closed fine-dining establishment Christophe’s on the Green in Vergennes? Recently, the Shelburne-based chef started a 55-animal farm called Champlain Valley Ducks. He’s already sold his poultry to the Farmhouse and Bluebird restaurant groups and to Kitchen Table Bistro.

But UVM president E. Thomas Sullivan may get more frequent chances to enjoy the mallard. Lissarrague’s job cooking for the president gave him the opportunity to start his new side endeavor, he says. He describes the UVM job that he took four years ago as involving about 40 hours a week of cooking for Sullivan at gatherings meant to impress donors and VIPs.

Lissarrague certainly has the pedigree to rise to the occasion. A native of France’s Basque region, he got his start cooking in high-end restaurants in Paris and New York before moving on to Tokyo, where he spent two years. He opened Christophe’s in 1995. Numerous publications named it one of the best restaurants in New England, but that didn’t stop Lissarrague from closing it in 2008.

“Because I had worked in New York and Paris and even Japan, it was a level of food people were not used to here. It wasn’t quite the right fit for the area,” he explains.

Lissarrague took a year off to reevaluate and spend time with his kids. One day he played volleyball with Tom Oliver, then operations director of UVM Sodexo, who suggested that Lissarrague might enjoy the comparatively light schedule of cooking for catered UVM events. “I’ve enjoyed it ever since,” Lissarrague says.

Though the employment is stable, the work is not. When Sullivan leaves town for a week, Lissarrague gets to relax, he says. Other weeks, several major events might be packed into a few days, and Lissarrague gathers any chefs he can to help him prep in the Davis Center or Waterman kitchens.

Because he’s cooking for the same client nearly every time he puts oil to pan, Lissarrague has the uncommon challenge of working to please Sullivan’s palate with a variety of dishes. But, because most of his ingredients come from Sodexo supplier Sysco, Lissarrague says, he’s limited in his ordering options, even with a far more lax budget than those of dining-hall chefs. He has to bowl over potential big spenders without using easy hits such as caviar or sparkling wine.

Lissarague says that image is everything in what he cooks — a professorial one. He says that although Sullivan’s role as president is essentially that of a CEO, food choices are expected to be slightly less than luxe to show that he is, at his roots, a member of the academia. Not that the dishes the chef creates are austere. He says he strives to create unique flavor profiles at each meal.

Lissarrague hopes to help bring a similar ethos to the dining halls. He has proposed that UVM Sodexo add a dining-hall unit called Scratch, where all dishes are cooked from just that, with no processed foods. “This plan has been ready for a year, but it hasn’t happened yet,” says Lissarrague. “The new generation is looking for a healthier alternative, and we have to come up with something.”

When Andrew Machanic got his degree from the New England Culinary Institute, the Maryland native was already an experienced chef. At just 17, he’d headed west with a friend to cook at a guest ranch in Wyoming. For much of his adult life, Machanic has led a gypsy existence, baking or working lines wherever he could. In 1999, he spent a year as Lissarrague’s sous-chef in Vergennes before returning to the seasonal guest-ranch lifestyle.

Machanic says ranch hours afforded him an exceptionally relaxed lifestyle for a chef, but in recent years he found that “working with mostly college students can become very frustrating when you’re trying to be very professional.”

Now he serves students instead. A few years ago, Machanic returned to Vermont, where he can spend time with his two children, who live with his ex-wife. In 2011, he took a job as a baker at the Davis Center and was quickly promoted to catering chef there. The following year, he became unit chef for Waterman Dining.

It’s one of the most sought-after jobs at UVM. As Machanic — who became a father for the third time this week — describes it, Waterman Manor is “a little, baby restaurant.” The lunch-only restaurant is the only one on campus with white tablecloths and table service, but prices are still college appropriate. The most expensive dish, local Highland beef tenderloin with two poached eggs, spinach and Hollandaise on griddled foccacia, rings up at $12. The varied menu also includes skewered chicken thighs over Israeli couscous with citrus raita ($8); and seaweed salad with shiitake fritters and maple-miso dressing ($10).

Machanic also oversees the food that goes into the more regulated, less creative casual fare of Waterman Café. Though calculating nutritional values and dealing with the ordering software for the café isn’t his favorite part of the day, Machanic says he enjoys his two-sided job. “I couldn’t do residential dining long-term. It’s soulless work. I can be as creative as I want to on the restaurant side,” he says.

And, unlike many chefs, Machanic has a day that ends at 2 p.m., leaving him time to pick up his kids from school. The chef says that if he had known when he was younger that restaurant jobs would make it impossible to see his kids, he would have chosen a different path, personally or professionally. But, thanks to Waterman, he’s struck a balance as a father and a chef.

Even the most war-scarred chefs can probably count on one hand the number of times they’ve served 1200 diners. Chris Hechanova does it every day. This year, UVM instituted a new requirement that freshmen must dine in residence halls. As a result, Redstone Unlimited Dining and other cafeterias have seen a major increase in mouths to feed and are struggling to hire employees to meet the need.

As former chef-owner of Colchester’s Big Chile Republic, Hechanova knows a thing or two about long hours. But he hopes his 70- and 80-hour weeks will soon give way to lighter days that allow him to pick up his 6-year-old daughter from school. Since he took the job four years ago, family time has been the greatest reward, says Hechanova. “I get to leave work and think nothing about it when I leave,” he adds.

That wasn’t always the case. Hechanova came to Vermont to study at NECI but quickly abandoned school for work. Before Big Chile, he worked at Smokejacks, the Iron Wolf and O. After closing his own restaurant, he supported himself by cooking at the Kitchen Table Bistro and Bistro Sauce. But working at a small restaurant is unstable employment, and when Sodexo came calling, Hechanova says, he was happy for the benefits and full-time hours.

Known for his creative international flavor combinations, Hechanova doesn’t play with his full deck at Redstone. But he says that he particularly enjoys cooking for the cafeteria’s vegetarian station, where he has more flexibility to improvise. On a recent Friday, Tunisian vegetable stew and Moroccan couscous were among the North African-themed choices there. Other diners enjoyed anise-roasted pork loin with figs and apples, or wasabi-ginger jasmine-rice cakes.

Hechanova credits UVM students with being “surprisingly discerning.” But, with a staff of mostly culinary newbies and 1200 people to feed, he says he can’t get too ambitious.

Someday, Hechanova says, he hopes to have the funds to open his own restaurant again. Until then, he’s eying the pop-up scene. Lovers of adobo and cauliflower cakes should keep their eyes peeled for his limited engagements in the near future. Or, like Rodney Dangerfield, they can head back to school.

The original print version of this article was headlined "The Old College Fry."