Those cookies come from the restaurant Pastaga on boulevard Saint-Laurent, one of Monsieur Crémeux's sister businesses. Both are owned by Canadian celebrity chef Martin Juneau and his business partner, Louis-Philippe Breton.

The duo's domain doesn't end there. Near the ice cream shop you'll find their chic natural wine bar, Cul-Sec Cave & Cantine (literally, cul-sec means "dry ass," a sweetly vulgar reference to the state of a glass after its contents have been drained), and their corner grocery store, Le Petit Coin Épicerie. Their snack bar in the Old Port recently closed for the winter. In his spare time, Juneau has produced a cookbook, Simplicité Culinaire (2016), and a slew of other seasonal projects and collaborations, and he's made numerous television appearances. One thing's for sure: He is one busy chef.

In Montréal, which has a high number of restaurants per capita, it's possible to go from one incredible meal to the next and never visit the same place twice. But Juneau and Breton's realm offers out-of-town visitors the particular pleasure of spending a weekend getting to know a chef's fare in different venues.

Empire building appeals to restaurateurs, too: Economies of scale can make a tough business more viable, allowing them to share staff and other resources among their establishments. Another prominent Montréal example is the crew behind Lawrence, Larry's and Boucherie Lawrence — a symbiotic restaurant, wine bar and butcher shop.

I wrote about that pork-loving restaurant group last fall. So on this trip I decided to explore the empire of Juneau and company, teasing out common threads in the chef's different establishments.

One thing I quickly learned is that Juneau and Breton don't take themselves too seriously. There's the mustachioed ice cream cone, for starters, and the fact that Le Petit Coin sells several varieties of ramen noodles, just like any mini-mart. Then there's the dress code spelled out on Pastaga's website. Translated into English, it reads: "It is not too difficult, provided you are not naked or dressed in a way that makes others uneasy."

Accordingly, my companions and I were clothed when we arrived at Pastaga on a quiet Sunday evening. But perhaps the website's warning against nudity wasn't entirely gratuitous. Over the course of a three-hour dinner, we encountered appealing, flavorful food and service that felt like the culinary equivalent of an S&M scene.

After promising, with a teasing note in his voice, that he would never say no to any request of ours, our server returned immediately to tell us that several things we'd ordered were unavailable.

That shortage was understandable on a Sunday night, but he proceeded to discuss the menu in a way that felt designed to cajole us in one direction or another. "You could order this," he said of fried cauliflower seasoned with a spice blend called vadouvan, "but if you want something more substantial, you could instead order the venison." Whenever one of us tried to select a glass of wine, he appeared at the table with two possible offerings but seemed already to have chosen a favorite.

Despite the oddity of the experience, or perhaps because of it, the meal was deeply memorable. Nearly every dish on the Pastaga menu sounded appealing enough to make ordering très difficile, and we ended up receiving waves of plates bearing more calories than needed to satisfy our hunger.

I melted over the foie gras special: tender seared liver surrounded by florets of fractal Romanesco cauliflower, garnished with black chanterelle mushrooms, parsley and pea shoots. I preferred that to the other liver dish we tried that evening, which was a riff on Jewish deli food: chopped liver, pickled onions and bagel chips. The second was solid, but the first was exceptional.

In Québec, chefs may struggle to offer an original poutine, with 24-hour poutine shops making taco, hot dog and meat lover's variations, among others. But Juneau has done it. In his twist on the dish, fingerling potatoes in a deep, rich jus are buried under a cloud of Parmesan mousse, ringed with a nest of fried, shredded potato. Shaved black truffle completes the decadent picture.

The maple-glazed pork belly with pickled carrots and herbs was delicious, although the carrot pancake at its base was a bit flabby. Both of these dishes exemplified a hallmark of Juneau's cuisine: building layers of flavor by using the same ingredient in several ways. Just as the carrot pancake was topped with pickled carrot, so the poutine's fingerling potatoes were paired with fried ones.

We finished our meal with a perfect fruit-topped panna cotta and a chocolate mousse. The latter was on the house, because our octopus dish had failed to appear. "Do you have coffee?" my friend inquired. "Of course," the server replied, looking a bit confused. "What kind of coffee would you like?"

It might seem like an odd question to ask in a restaurant, but not an unwarranted one here. The previous evening, at wine bar Cul-Sec, my sister had received a different response. "We have bad coffee," our server replied with a grin.

Cul-Sec doesn't make fancy espresso drinks, and the coffee it does serve comes from pods. So my sister ordered one serving of "bad coffee" and stirred in a large lump of raw sugar as we examined the menu.

Much as I enjoyed the food at Pastaga, overall, I preferred the experience at Cul-Sec, which offers a selection of flawless small plates alongside its vin. The environment was intimate and cozy, with wine bottles and iconic Montréal scenes on the dark gray walls. A tattooed chef worked alone in the open kitchen beneath a sign reading "cuisine." And the service was entirely charming, from the "bad coffee" on. 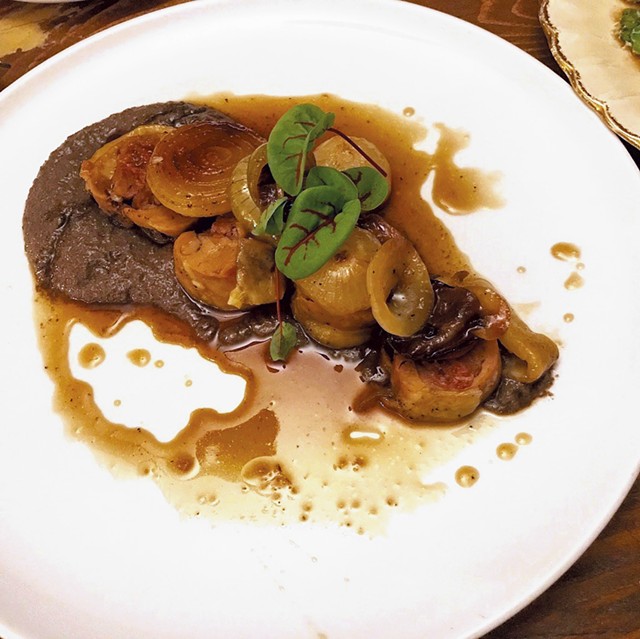 We began with loup de mer ceviche, garnished with bits of crispy corn tortilla and micro-cilantro with leaves that hadn't fully shed their coriander seeds. The bursts of flavor from the seeds and the tortilla's crunch were perfect counterpoints to the tender fish. A shrimp salad with watercress, pickled mushrooms and a tiny brunoise of cucumber was equally good.

Alongside, we sampled several wines by the glass, all excellent matches for the food. We passed on the bottles in favor of sampling a wider selection, but the wine list was extensive and deep.

It was a pair of meat dishes, both of which went nicely with my Séléné beaujolais, that made me fall in love. First came pork ravioli with mushrooms, served in a shallow puddle of rich broth. The noodles were al dente, the shredded meat was tender and the broth was good enough to drink off the plate.

The best dish of the evening, though, was a roulade of guinea fowl served over a deep, dark mushroom purée, with a meat glaze, grilled onions and baby greens that looked like beet leaves but weren't, according to our server. The dish was bursting with umami from the sauce and the mushrooms.

Getting the matched set of four Juneau-Breton businesses under my belt gave me an experience I wouldn't have had simply dining at Pastaga or passing through Le Petit Coin. Like a quartet of novels that can stand alone but together build an elaborate universe, each spot offered its own playful variation on Juneau's approach to food, from the souped-up ice cream sandwiches at Monsieur Crémeux to the whimsical poutine at Pastaga.

As I watched the threads come together, I felt the sort of nostalgia that doesn't usually happen until well after a meal. "Look, they're using watercress as a garnish again," I pointed out to my crew at Pastaga. "They did that at Cul-Sec, too."

At home, one can make dining out a richer experience by following a favorite chef from one restaurant to the next, watching their cooking develop over time. Exploring a chef's kingdom, as one can with Juneau's, is another side of the same petit coin.