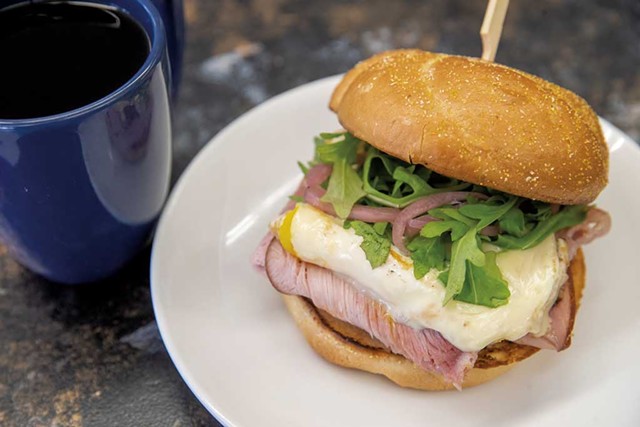 Last week, for my first indoor restaurant meal since March 11, 2020, I started at the beginning: with breakfast. The place I chose, Pioneer Lakeshore Café, is a beginning, too — for Jean-Luc Matecat, its chef and co-owner.

Matecat and his wife, Lindsay, opened the café in Colchester's Malletts Bay on May 29. The 39-year-old chef, who grew up in central Vermont and the Mad River Valley, has been working in restaurant kitchens for more than 25 years. Now, for the first time, he owns his restaurant. Matecat calls it surreal. I call it real.

At the welcoming café, I sat on a stool at the counter and drank a mug of coffee. I watched the cooks do their thing in the kitchen — one of my favorite things about being in a restaurant. I ordered a breakfast sandwich: fried egg, cheddar cheese, roasted mushrooms and arugula on a toasted brioche bun. The sandwich was real good. So was the price — $6. (The mushrooms add $1.50 to the $4.50 breakfast sandwich.)

"I got a lot of satisfaction [from] making a good burger and a fried chicken sandwich." Jean-Luc Matecat tweet this

At the sweet little meal that got me back in the restaurant groove, I talked to a real person sitting a couple of stools away while he waited for his to-go order. His clothes, a blue suit and a pair of worn Nikes, caught my eye. He wore his face mask indoors.

His name is Chris Reed. He's a 24-year-old bank officer who commutes to work in Colchester from his home in Morrisville. Reed told me he had eaten lunch at the café the previous day and the chicken sandwich was the best he's had in his life.

"It's really affordable," he said.

Affordability is one of the things the Matecats are aiming for in their new restaurant, along with "making food that would reach the whole community."

Matecat started washing dishes at age 12 for his French-chef father, Patrick Matecat, at the acclaimed Common Man Restaurant in Warren.

"Working in that dish pit was more difficult than most line-cooking jobs over the years," he said. "It was the old French kitchen: If you didn't snap to, you were done."

Among the things he learned from his father was family history: His Matecat ancestors were servants to French royalty. "That's great," Matecat said. "I love cooking for people."

He's cooked at an inn, a barroom, a chateau, a country club, a music club/restaurant, a resort and a food truck. He even catered his and Lindsay's wedding two years ago in Fairfax.

"That was one of the stupidest choices I made in my life," Matecat said. 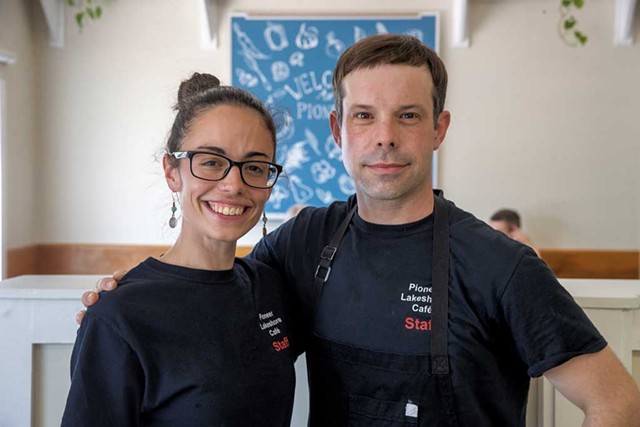 When Matecat and Lindsay opened their own place, they picked a spot about a mile from their home, a no-frills space with big windows, a lunch counter, a handful of tables and a neighborhood feel. Lindsay runs the front of the house.

The breakfast and lunch menu is as American as French fries — which are hand cut and cost $4. The chef who served me short ribs, purple potatoes, broccolini, pan-fried rainbow trout and ratatouille the first time I ate his food has now designed a menu for the let-them-eat-cake crowd.

Working with George Lambertson at ArtsRiot, Matecat said he realized that he was "really happy cooking pretty much anything."

"Spending all these years cooking terrines and complicated food," he continued, "I got a lot of satisfaction [from] making a good burger and a fried chicken sandwich."

For breakfast, Pioneer Lakeshore Café serves eggs and home fries, breakfast sandwiches, waffles, and hash browns. The lunch menu kicks in at 11 a.m. and includes a couple of salads with optional grilled salmon or fried chicken, a crispy chicken sandwich, a burger, a fried fish sandwich, a vegetable pita, a lobster roll, and chili.

Probably the most exotic thing on the menu is the alpaca burger, called the Big Pac ($11). This option gave me pause before I ate it on my first visit to the café — a takeout lunch — and challenged me with this thought: Why would I not think twice about eating cow, turkey, lamb or lobster, alive one minute and dead the next, yet I balked at the prospect of eating alpaca?

Matecat is an enthusiastic feeder of people, as well as an expert one. He sold me on the alpaca when he told me about the farmers who raise the animals at Cas-Cad-Nac Farm in Perkinsville. Matecat even wrote an alpaca cookbook, The Cas-Cad-Nac Farm Cookbook.

The alpaca burger I ate in a Colchester park was mild and, as touted by Matecat, a little sweet. But the Big Pac's flavor was somewhat obscured by its Big Mac-like presentation: American cheese, secret sauce, pickles, lettuce. These are the essential extras that make a burger a burger, never mind the patty's origin. And this was a real burger.

In the kitchen with Matecat are two cooks he worked with during his pandemic-era gig as executive chef at Vermont National Country Club. He calls Matt Toll and Kyle Alber the "two gentlemen in the kitchen."

"The line cook is going extinct," Matecat said. "There's not a shortage; they're not coming back. They're gone. So, I found those people; you got to take care of them."

He's trying to take care of himself, too, pacing himself for those super-long days.

"I still like to a work a lot," Matecat said. "I can still do the 15-hour day. But it's like peanut butter spread too thin on toast."

The chef who spent a good portion of his career leaving the kitchen at midnight or later now gets to work at 4:30 or 5 a.m. to prep before the café's 7 a.m. opening. It's when he takes on "big projects" such as making sauces. In the early hours, Matecat is "banging out a lot of those."

"I like the mornings now," he said. "I'm gradually shifting my life."

The original print version of this article was headlined "Real Restaurant"