When Cara Chigazola Tobin was a 17-year-old high school student in Lebanon, N.H., she walked into a pizza place in Hanover to ask for a job.

"Can you cook?" the chef-owner of Everything But Anchovies asked her.

"Yes, definitely!" she answered. She loved food, but her claim was a bit of a stretch. ("I had no idea what I was doing," Chigazola Tobin said 20 years later.)

Chigazola Tobin returned and stayed for more than three years, learning how to move in a kitchen, how to use equipment, how to be organized and, maybe most important, how to be fast.

Many of the lessons came between 10 p.m. and 2 a.m., when Chigazola Tobin and a dishwasher were the only workers on shift. She handled the 1 a.m. rush of Dartmouth College students who wanted pizza, pasta, salad and sandwiches in the hour before closing.

"It taught me how to work in a professional kitchen," said Chigazola Tobin, now chef/co-owner of Honey Road. The Middle Eastern restaurant opened on Church Street in Burlington two years ago and quickly became a go-to spot.

Between Everything But Anchovies and Honey Road, Chigazola Tobin went on a cross-country adventure, worked a range of cooking jobs, married her high school boyfriend and had a son. The 36-year-old chef is expecting her second child in three weeks. She'll be working this summer but "taking it easy" after the birth of her baby boy. "I have fun coming here," she said. "I'm excited to have him here with me."

"Chefs have a lot of ego," Chigazola Tobin said last week. "But at the end of the day, we're in the entertainment business. I'm here to provide you with an experience that makes you forget about the troubles in your life for an hour and a half of your day."

Pointing to two staircases at Honey Road, she said she walks up and down them many times a day, circling the restaurant to take it all in — the lighting, the table setting, the sounds and smells, and yes, the look of the plated food. The goal is to get a sense of a diner's "full experience."

"It's super important to me," she said, "that big-picture experience." 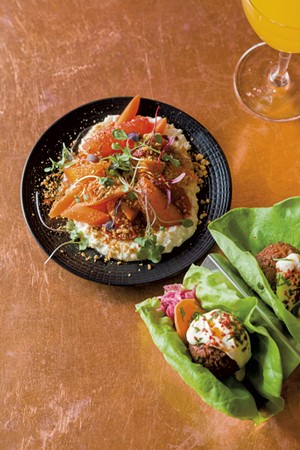 "We work well together, and we vibe well together," said Trombly, 39. "I feel like every chef's journey is unique in some way. And I think Cara does a good job of making [the food] interesting and different, but people get it."

Chigazola Tobin grew up in Sacramento, Calif., and (briefly) in Iowa. At 15, she moved with her family to Lebanon, N.H., where she went to high school and got her pizza-place job.

When she was 21, she and her boyfriend, Willie Tobin — now her husband — loaded her jeep and moved to California, a homecoming for Chigazola Tobin. He was a student at the University of California, Santa Cruz; she worked as an officer manager for a naturopath.

One day, a patient left an appointment with dietary instructions: no dairy, no gluten, no soy, no sugar. "He looked at me like, 'What do I do?'" Chigazola Tobin recalled.

She offered to go to the patient's house once a week, cook a bunch of food for him and freeze it. With its bounty of fresh produce, Santa Cruz had plenty of ingredients for people on restricted diets.

The personal catering job made Chigazola Tobin realize she missed cooking. She decided that she wanted to get serious about it, to "treat it like a craft," as Tobin suggested.

She enrolled in a yearlong program at the now-defunct Culinary Center of Monterey, where she learned basic cooking techniques. She also worked: one semester as a line cook at a roadhouse making barroom fare, the other as a baker and brunch cook at a bakery.

Chigazola Tobin's California cooking experience would go on to include being sous chef at the high-end PlumpJack Café in San Francisco, where dinner unfolded over three hours, and banquet chef at an affiliated resort in Tahoe, Calif. Later, she was executive chef at Dream Inn Santa Cruz and was responsible for its restaurant, poolside bar and room service.

"I love my life now," she said. "But I miss that freewheeling California spirit."

In 2010, the couple moved back east for Tobin's graduate studies at Harvard University. Chigazola Tobin answered a Craigslist ad for a job at Oleana, where she worked for six years. But the couple wanted to settle in Vermont, where they have family, so they moved here in September 2016. By then, Chigazola Tobin knew she wanted to open her own restaurant.

She and Gibson, 43, met through a mutual friend, who offered this advance word on Chigazola Tobin: "She's moving to town. She's really cool. You guys should know each other," Gibson recalled.

The two met for coffee at Maglianero and took a walk on the waterfront. During a second walk, this one at Shelburne Farms, Chigazola Tobin popped the question: "Do you want to open a restaurant with me?"

Gibson said yes. She'd worked in restaurants since age 14 and was then operations director of Hen of the Wood and Doc Ponds. Within nine months of that "lightning bolt" affirmation, as Gibson put it, the women opened Honey Road. With no location in mind when they decided to go into business together, they ended up leasing the space that once housed Smokejacks, where Gibson had been a server almost 20 years ago.

Through hours of phone calls and writing their business plan, the women built a "shared vision," Gibson said. They organized pop-up dinners to present Chigazola Tobin's cuisine to local diners and introduce her to the Vermont restaurant scene. To make certain decisions, they each rated the choice on a scale of 1 to 10. Whoever scored it with the higher number, indicating she cared more about the particular decision, made the call.

Over and over, during the whirlwind months before they opened Honey Road, the partners were advised to seek a "target audience," Gibson said. Chigazola Tobin rejected that notion, telling Gibson: "I want everybody."

Based on the crowds at Honey Road, it appears she got what she wanted.

The menu at Honey Road is deceptively simple: dips in one section, mezze in another. But the items in it — cacik, markouk, shankleesh, tarator — might require explanation, so the menu includes a glossary.

Seven Days compiled a glossary about Honey Road itself.

Accolades: Honey Road is a three-time James Beard Foundation Award semifinalist: for best chef and best new restaurant in 2018, and for best chef in 2019.

Honey Road: The restaurant's name refers to a long-ago market road in Kars, Turkey, where women took over beekeeping and related activities when townsmen went to war. To chef Cara Chigazola Tobin, who loves the Beatles, Honey Road also sounds like the name of a Beatles cover band. "It hits all the marks," she said.

Hot spot: Honey Road has been abuzz since Chigazola Tobin and general manager Allison Gibson opened it in the summer of 2017. The crowd includes area chefs, out-of-towners, and locals celebrating special occasions or dining on the reg. During Honey Time (4 to 5 p.m.), customers come for after-work drinks, $1 chicken wings and baba ghanoush with pickled cauliflower.

Pink: That's the color of the neon flamingo that hangs above the bar by the restaurant's Church Street-facing front window. The bird casts a happy glow over the bar and highlights shades of pink around the restaurant: from a bartender's T-shirt to a cook's apron straps; from the copper-topped bar to the cocktail napkins; from vintage glassware to a pour of Slovenian wine the color of the sinking sun.

Robert Frost: On occasion, the cocktail list offers a drink named for a work by Vermont's first poet laureate. The Secret Sits, a seasonal selection, is a rum cocktail with port and fig-infused brandy, decorated with pineapple. If Frost reveals his secret in two lines, Honey Road unveils its own at dinnertime.

Vegetables: In the winter, about half the dishes on the menu are vegetarian, including creative takes on Brussels sprouts and kale and terrific king oyster mushrooms with spicy tahini and sunflower seeds. During the summer and fall, when Vermont's harvest is in full swing, Honey Road expands its vegetarian options to highlight local produce.