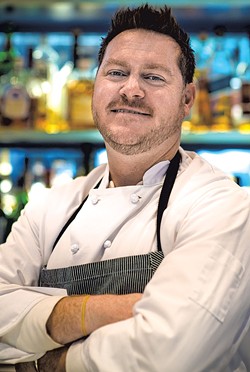 Northern Vermonters know Adam Raftery as the chef behind South Burlington's Wooden Spoon Bistro and Burlington's St. Paul Street Gastrogrub. He still owns those restaurants with sister Liza O'Brien, as well as food cart the Front Yard.* But Raftery hasn't cooked at his eateries since the summer; he's busy preparing for a new venture.

In December, his cuisine will fly south to Manchester Village with the opening of the Copper Grouse. The new restaurant is the centerpiece of the soon-to-open Taconic, a Kimpton Hotel, Vermont's first link in the San Francisco-based boutique chain of Kimpton Hotels & Restaurants.

Raftery was chosen as the Grouse's opening chef for his experience and facility with Vermont products. The cook says that leaving his own restaurants was a difficult decision, but he lauds Kimpton for the opportunities it offers, saying, "They give me a lot of resources that allow me to create the kind of food I've always wanted to create."

The drinks program will include cocktails made with local spirits and a menu of Vermont beer cocktails. Kimpton's master sommelier, Emily Wines (yes, that's really her name), curates a selection of more than 100 wines. Beer-pairing dinners will spotlight local breweries. Such events might just make Manchester a new destination for fans of Raftery's Vermont-focused fare.

*Correction, December 3, 2015: An earlier version of this story misidentified the fare that the food cart Front Yard serves.