Cheer Up! There's No Bad News in Shum-Land 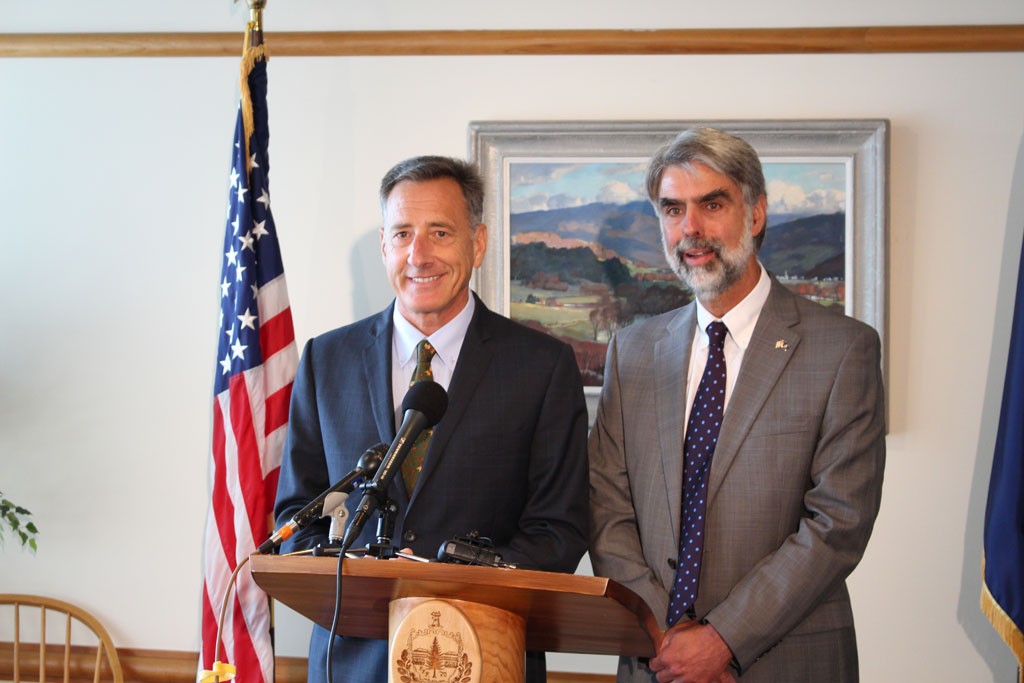 To fill that hole, Shumlin said, he had ordered his cabinet members to figure out how to cut their agency and department budgets by 4 percent.

After announcing the bad news, Shumlin spent the next 25 minutes trying to convince a skeptical press corps that it was actually good news. Sure, he said, state revenue wasn't growing at the 4.8 percent rate economists had projected, but it was still growing by 3 percent — a far cry from the revenue-shrinking years that followed the 2008 financial crisis.

"Let's remember, this is a downgrade of an up year," Shumlin argued, displaying his characteristic acuity with rhetorical gymnastics. "We continue to grow. We continue to have good economic news. But the growth rate this year will be slightly lower than we predicted. Again, it's 3 percent higher than it was last year. That's good news!"

When asked how the revisions would affect his plans to finance a $2 billion overhaul of the state's health care system, Shumlin called the two subjects "apples and oranges" — and then admonished reporters for their dour outlook.

It's true that $31 million is a fraction of the state's $1.4 billion general fund budget — a little more than 2 percent, to be precise. But anybody who's watched the governor and legislature spend four months haggling over fractions that small knows that it's tough to come up with that kind of money.

It's tougher still when the fiscal year has already begun, when raising taxes is not an option because the legislature isn't in session, and when the governor rules out cutting the state's contributions to its retirement funds and debt service, as he did last Thursday.

Though Shumlin pledged to avoid laying off state workers, that doesn't mean the cuts won't hurt. Let's be clear: Slashing agency and department budgets by 4 percent will have a palpable effect on those who rely upon state services.

It's not good news — and doesn't inspire cheer.

Nor do the underlying economic data driving the revenue downgrade. Administration officials and state economists attribute some of the revision to recent changes in the federal tax code and an unusual first-quarter decline in the nation's gross domestic product. But they also posited a more troubling explanation: Vermonters may be earning less money than they did last year.

"This unusual, though not unprecedented, decline [in income tax withholding] may reflect on the quality of jobs currently being generated, with lower paying and more part-time positions now in the mix," Tom Kavet, the legislature's consulting economist, wrote in a report to the Joint Fiscal Committee.

Again, that is not good news.

Of course, the Shumlin administration has long displayed an Orwellian knack for turning bad news into good.

When the federally mandated insurance exchange, Vermont Health Connect, nearly failed to launch last summer, Shumlin described the forthcoming website as "bare bones." When his administration revealed in September that it would not be able to process credit card payments, he called the problem a "nothing-burger." And when reporters focused on the site's inability to enroll small-business employees, the governor berated them for dwelling on the negative.

At an off-season meeting of the House Health Care Committee last Wednesday, Chairman Mike Fisher (D-Lincoln) told Shumlin's newly installed chief of health care reform, Lawrence Miller, that those failings had reached "crisis" stage. Specifically, Fisher was referring to the more than 14,000 Vermonters who have tried and failed to update personal information through the website's "change of circumstances" feature, but who have been stuck in an endless queue. Many of those have been denied care — or are stuck paying too much or too little in premiums.

Miller told Fisher he agreed with the lawmaker's assessment.

"There is a crisis for the 'change of circumstance' population," Miller told Seven Days later that week. "For them, it really sucks right now."

That problem is nothing new. But even after the state signed a $5.7 million contract last month with OptumInsight to task 125 call-center workers to clear the backlog, the queue has continued to grow.

Miller also identified a new problem: Over the course of four months this spring and summer, some 22,000 Medicaid beneficiaries failed to renew their coverage. Miller blames the problem on a precipitous switch from paper enrollment forms to the malfunctioning website.

When the administration finally noticed the problem earlier this month, it obtained permission from the federal government to retroactively cover all those who were dropped. Miller insists that most doctors and pharmacists continued to serve those who lost their Medicaid coverage, but he admits that some may have opted against seeking treatment out of fear they weren't covered.

"That was a highly negative event," he said. "I'm not trying to minimize that at all."

Miller's candor — unusual for a member of the Vermont Health Connect politburo, and quite refreshing — may have been contagious. At another press conference last Thursday, Shumlin himself admitted that the exchange's 10-month-old saga was "unacceptable," "frustrating" and "enraging."

So what's he doing to get it right?

In an interview with Seven Days on Tuesday, Shumlin listed three steps: He brought on Miller and operations manager David Martini to "get the operations right." He issued a "directive" to "ensure that the IT challenges that we've been facing at Vermont Health Connect don't stand in the way of Vermonters getting health insurance."

"Finally," he continued, "I've said, 'Make this as easy for Vermonters as possible by ensuring they always have the paper option as we're moving to technology.'"

To many lawmakers, Shumlin's latest assurances are too little, too late.

"To spend all those hundreds of millions of dollars and to have a system that's worse for many Vermonters is kind of appalling," says Sen. Kevin Mullin (R-Rutland), a moderate Republican who voted in 2011 to set the state on course for a single-payer health insurance system.

Lt. Gov. Phil Scott, a Republican who supported the federal Affordable Care Act and who says he "truly want[s] to see the exchange work" says he's ready for a Plan B.

"I just don't believe it's working now," he says. "I think it's time we take a look outside the box and change course."

Scott says the state should consider following New Hampshire's lead and adopt the federal version of the exchange, though that would jeopardize subsidies for low-income Vermonters, or team up with New Hampshire and Maine to create a "tri-state" exchange.

"There comes a point where you have to stop, and I think we're at that point," Scott says.

On Tuesday, Reps. Patti Komline (R-Dorset) and Heidi Scheuermann (R-Stowe) called on Shumlin to allow individuals and sole proprietors to bypass the website and buy approved plans directly from health insurance companies. That's exactly what Shumlin allowed small business employees to do last year when technical problems kept them from signing up through Vermont Health Connect.

"We have more than 14,000 people who are bogged down in errors through no fault of their own," Komline says. "This is actually a crisis."

More problematic for Shumlin than the criticism he faces from Republicans is that from his own party.

"I don't know how many times I've been promised or how many plans I've heard that would fix it," Fisher says of the change-of-circumstances malfunction.

In his day job as a social worker, Fisher says, he regularly works with low-income Vermonters who have struggled to navigate the system — and he worries that some have simply given up.

"The administration says that when people have a medical need, they're processing those requests within 24 hours," he says. "But how many people are out there with medical needs who don't call — that are just sitting on it?"

Nearly a year after the launch of Vermont Health Connect, Fisher says, the state's health insurance system is no better off than it was before the exchange.

"At the current time, with the current functionality problems, it is indeed worse," he says. "I continue to believe — or, at least, I have a hope — that the system will work better."

"I think that it's incumbent on the administration to look internally to see whether this is a failure not only of [contractor CGI], but of the people who are managing the project," Smith says. "It certainly looks like people have not lived up to what they promised."

Fisher and Smith both say they're contemplating legislative action. Fisher says he's "willing to look at" the possibility of allowing individuals to direct-enroll, as Komline and Scheuermann have suggested. Smith, too, seems open to the possibility.

"My view is that the one thing that we could have done was to make the exchange voluntary and allow both the individual market and businesses to buy directly from the carriers," Smith says. "And I think that's an issue we may have to revisit if the exchange is not running effectively."

With an election three months away, it's no surprise that Smith and Fisher — the latter of whom faces a tough race — are suddenly coming up with ideas to address Vermont Health Connect's failings. But where were they last winter, when the legislature was in session and the website's problems were abundantly clear?

Says Smith, "We are not in a place where any of the legislators can go in and fix the coding and management problems. So as far as the execution of the plan goes, I don't think that we can be found to be at fault."

As for Shumlin, he's still trying to get Vermonters to cheer up about the situation. According to the governor's latest Dickensian talking point, Vermont Health Connect is a "tale of two worlds," which includes those who are happy with their coverage and those stuck in the change-of-circumstances queue "who are incredibly frustrated."

And what about those who temporarily lost their Medicaid coverage?

"Let's be clear about that: No one's going to get dropped off the rolls," Shumlin said in Tuesday's phone interview. "This notion that people are getting dropped off is not correct."

Half an hour later, Miller called back. Asked whether thousands of Medicaid beneficiaries were, in fact, un-enrolled, Shumlin's health care czar said they were.

"Their Medicaid cases were closed," he said. "The difference is they were reinstated. There was no coverage gap."

Is it possible that some decided to skip visiting a doctor or refilling a prescription during that time?

"Yes, and they should not have," Miller said. "I'm not trying to minimize it at all. They definitely had their cases closed. That was not proper. But for anyone in that group, they were reinstated."

So perhaps we should all just cheer up?

The original print version of this article was headlined "Cheer Up!"