What's the best way to get rid of head lice? 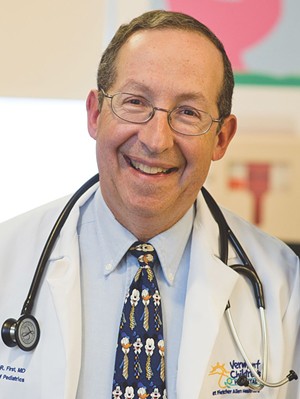 Head lice are tiny, wingless insects that live in human hair. Annoying and contagious, these parasites are common, particularly among young children. The U.S. Centers for Disease Control and Prevention estimates that there are between 6 and 12 million lice infestations annually among kids 3 to 11 years old — and the cold weather doesn't kill these insects.

What's the best way to get rid of those lousy critters? This month, Dr. Lewis First, head of pediatrics at University of Vermont Children's Hospital, gets nitpicky on how to cure a head-lice infestation. Thankfully, Vermont is not one of the 25 states where "super-lice" — lice that are resistant to over-the-counter anti-lice medications — have been found statewide.

KIDS VT: What are some comwmon misconceptions about head lice?

LEWIS FIRST: First of all, lice are not life-threatening and don't carry serious diseases. Lice are not a sign of poor hygiene, of unclean hair or an unclean home. Basically, lice can set up shop in anyone, at any time, regardless of socioeconomic status or of who you are, what you do and where you live.

KVT: How do kids get lice?

LF: Lice cannot hop, fly or jump. They can only move to another child by head-to-head contact. And you cannot get them from a pet or by being outside in the grass or woods. Lice can survive only one to two days off the hair shaft. So if you're using the pillow of someone with lice, there's only about a 10 percent chance, or less, that you will get them. It's mostly head-to-head contact that spreads them. You know what's a great culprit for spreading head lice in 2015? Selfies — when kids clunk heads to take a picture!

KVT: At what age do kids typically contract lice?

LF: Lice are most common in preschool and elementary schoolchildren. That's the age when they're constantly in head-to-head contact or rolling around together playing on the floor or ground.

KVT: Should kids attend school if they have lice?

LF: There's no reason for a "no nit" policy in schools. Children who have head lice should go home, get treated overnight and can return to school the next day. You usually have head lice for about four weeks before you even know they're there. So the idea of sending kids home from school immediately makes no sense whatsoever.

KVT: Why do lice itch?

LF: The itching is due to saliva from the louse, which it deposits in the skin as it bites the scalp to feed off your blood. You develop a sensitization around those bites, which can become red and itchy.

KVT: How can parents be sure that what they're seeing are lice?

LF: If you see tiny, light-colored specks on your child's scalp, what you're seeing could also be dandruff or eczema. A comb will remove dandruff easily. Nits, or lice egg casings, are white and typically at the base of the hair shaft, not at the ends of the hair, and they don't come off easily with a normal comb. The lice themselves can be harder to find but are either white or tan and about the size of a sesame seed.

KVT: Why are some lice treatments ineffective?

LF: There are some common explanations. The first is that parents may not be following the treatment directions carefully. Another is that parents aren't spreading the treatment lotion over the child's entire scalp. Another explanation is reinfestation from another child with lice. Finally, some parents don't do a second treatment seven to 10 days later, when they should. Typically, these over-the-counter products are 80 to 90 percent effective. They may still leave some nits on the hair shaft, which 10 days later can hatch into lice, which is why the second treatment is so important.

KVT: What if parents don't want to use chemical treatments?

LF: Some people believe that an herbal remedy may be just as effective, but there is no scientific data to show that's the case. Common nonchemical treatments include covering your child's scalp with mayonnaise, petroleum jelly or olive oil and then covering their head overnight with a shower cap. But small children can easily pull a shower cap over their face at night and suffocate. Second, even then, it's not clear you will kill every louse. Finally, it's very difficult to get that stuff out of your kids' hair.

KVT: What do people need to do to treat their home after a lice exposure?

LF: Anything or anyone that's come in contact with your child's head in the past 24 to 48 hours needs preventive treatment. Pillows, sheets, blankets and stuffed animals should be sanitized in hot water in the washing machine, followed by frequent vacuuming of couches, rugs, carpets and even car seats that were in contact with a child's head. But extensive and exhaustive home cleaning measures aren't necessary.