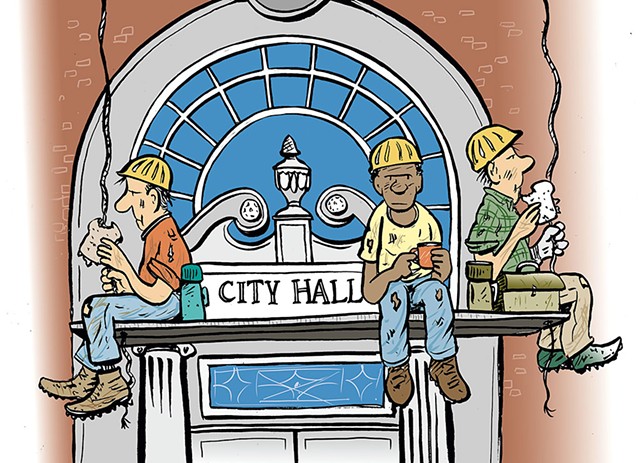 The spring of 2013 was a turning point for Burlington's livable wage ordinance. The local law — which mandates a minimum rate of pay for city employees and people working on a city contract — had been on the books since 2001.

But Mayor Miro Weinberger wanted to know how the rule had been enforced after a city council committee granted a controversial waiver for the Skinny Pancake, which operates three restaurants at the Burlington International Airport. He asked City Attorney Eileen Blackwood to investigate.

She found that there had been no real oversight. Of the 160 municipal contracts covered by the ordinance, only 23 were in full compliance. The report sparked a monthslong process of rewriting the ordinance, which resulted in an important new clause: The city would hire a "designated accountability monitor" to help enforce the rule since the public didn't trust the city to do it on its own, Weinberger recalled.

The third-party outfit would visit work sites, operate a hotline for complaints, and refer any credible tips to the city attorney's office for follow-up and possible fines. City attorneys and the city's chief administrative officer would also conduct random compliance checks.

The Vermont Workers' Center, a Burlington-based nonprofit that advocates for fair working conditions, was the only bidder for the contract in 2014.

This spring, the contract was nearly cut from the budget as Weinberger attempted to close a $12 million deficit caused by the coronavirus pandemic. City councilors convinced the mayor to fund the $24,000 annual expense, but soon after, the Workers' Center announced it would not renew the agreement. Its services ended July 1.

The center's departure leaves a hole in the city's wage enforcement just as the construction season enters its busiest months. Blackwood has directed her staff to take on the responsibility this summer until the city can hire a new accountability monitor — though she worries that few, if any, organizations will apply.

Blackwood and Weinberger acknowledged that the lack of a dedicated oversight agency could lead to lapses in compliance with the law. But the mayor is optimistic that a signature policy initiative of his tenure can survive a changing of the guard.

"We gotta try to find a way, at least in the short term, to do it in-house, and I think we can," Weinberger said. "I am committed to making sure we don't go backwards."

Burlington's livable wage is calculated each year based on what a member of a two-person household must earn to support his or her basic needs. The fiscal year 2020 rate is $14.44 an hour for workers who have health care benefits and $15.83 for those who don't. Most of the city's 800-plus employees are covered, including seasonal and temporary workers who put in at least 10 hours a week and have worked at least four years for the city.

Though the ordinance applies to any business or group — including lawyers and architects — that performs taxpayer-funded contract work, enforcement has focused on employers such as construction companies. The ordinance kicks in if the contractor will be paid in excess of $15,000 in a 12-month period. It also requires that these companies provide their full-time workers 12 paid days off a year. If contractors are found in violation, they can be fined up to $500 and blacklisted from receiving city contracts for up to two years.

Contractors are not required to submit payroll information to the city unless asked, and the city doesn't check each of the nearly 100 contracts on the books in any given year. Instead, the Workers' Center depended on tipsters and the city attorney's office to conduct payroll checks to enforce the ordinance.

In the six years of the partnership, about half the contractors investigated were found in violation of the ordinance. Forty-five workers have received more than $6,000 in combined back pay, center director Kate Kanelstein wrote to the mayor in announcing the group's decision to step away.

In 2017, for example, a tip to the Workers' Center revealed that two employees at the temp agency Westaff were owed more than $2,000 in wages. And a random check found that S.D. Ireland, the concrete construction company, owed 11 workers a total of $2,155 and 42 employees additional paid time off.

The city also wrote its first tickets for violating the ordinance that year: ADA Traffic Control was slapped with a $1,000 fine, or a $200 ticket for each of the five workers the city found were owed money. The city decided the penalty was warranted because ADA had underpaid 15 flaggers the year before.

Some aspects of monitoring compliance with the ordinance made it challenging, Kanelstein said in an interview, but that's not why the group is giving up the work. Rather, she said, her staff needs to focus on statewide organizing efforts, including the push for universal health care.

Kanelstein does hope the city will improve some of its practices so that missed wages don't go unnoticed. The city should perform more random audits and start investigations as soon as the monitor flags a potential violation, she said. The current process is often slowed by bureaucracy, she said.

"Ultimately, those workers will still get back pay if there's found to be a violation, but that could be a long time," Kanelstein said. "That worker could have moved on to another job."

Kanelstein suggested that the city require companies to submit their payroll records before being awarded a contract. Currently, contractors sign a form promising to pay a livable wage and only submit payroll records if asked. "Real-time monitoring" would weed out underpaying companies from the start, Kanelstein said.

Blackwood, however, said that method would remove the element of surprise.

"We're really trying to figure out if somebody's a bad actor [and if] you're trying to hide it," Blackwood said. She questioned whether contractors would be honest about their wages if they knew the city only checked their first payroll on the job.

Blackwood has asked her staff to conduct more random audits this construction season. City attorneys have performed an average of five compliance checks per year since fiscal year 2018. Blackwood said she plans to ask Kanelstein which companies to check first.

Best-case scenario, the city would have another partner on board by August, she said.

"It's a work in progress," Blackwood said. "We're going to do our best to make sure things don't fall through the cracks, but will it be a challenge? Yes."

City Councilor Brian Pine (P-Ward 3) wonders whether another city department might be better suited to work with the next watchdog. Assigning city attorneys to check pay stubs is a practice akin to "using a chain saw to cut the butter," he said.

Pine added: "On a billable hourly rate, it's just not a great use of a lawyer's time."

Pine suggested employees in the clerk/treasurer's office could be a natural fit since they work with numbers. Or maybe a staffer in the city's Community Economic Development Office, which enforces a similar wage law for city projects that use federal money.

Weinberger said he's open to discussing the best arrangement for the next accountability monitor, though he shares Blackwood's concerns that the city may attract few interested parties.

He's also given some thought to Kanelstein's recommendation that the city extend the livable wage to the 140 seasonal and temporary employees who are not eligible under the current rule. Councilors decided in 2013 to exclude these workers because it was too costly and because many of them weren't relying on the income for living expenses, according to Blackwood. A December 2019 study by the city's human resources team concluded that covering the extra workers would cost the city about $290,000 a year.

"Given what we're facing, it would be an extraordinarily challenging year to do that, but I'm open to an expansion in future years," the mayor said. For now, he added, "it's been working the way it's supposed to on paper, and I'm committed to keeping it that way."

Weinberger isn't so sure about Kanelstein's other suggestion: that the ordinance cover everyone who works on property leased by the city, such as the airport. Those workers were previously covered by the ordinance but were removed after the airport struggled to find vendors who would adhere to the wage requirements, Blackwood recalled.

"It turns out we were way closer than we realized," he said. "We bumped everyone up."

Pine said he suspects city councilors might have paid more attention to the loss of the city's livable wage monitor if recent budget discussions hadn't focused solely on policing. In a typical year, "this would be generating some interest and some concern," he said, adding that the council would be trying to quickly fill the gap.

And Pine hopes the vacancy is filled soon. He thinks a carefully enforced livable wage ordinance can ensure that workers are paid what they are owed and also put pressure on area employers to raise their pay rates across the board.

That's what happened with ADA Traffic Control, the first company fined under the Queen City ordinance. After underpaying its Burlington employees in 2017, the company bumped its starting pay from $11 to $16 an hour, a rate just over the city's livable wage.

"We just said, 'We are gonna set a new bar. We're no longer going to be a company that just takes anybody that can hold a sign paddle in the roadway,'" said company vice president Patrick Murphy. "'We are going to set a new standard.'"

ADA made the change in the middle of the 2018 construction season and lost a lot of money in the process, Murphy said. ADA's contracts that summer paid the company enough to cover its workers' $11 hourly wage but not the higher livable wage, so the firm had to cover the difference. It also lost potential jobs in other communities because Murphy had to bid higher to account for his workers' higher pay.

He has no regrets. Murphy said the company has recovered, and he's proud "we no longer are seeing our people in poverty." The city's ordinance woke him up.

"We took our punishment. It is what it is, but the philosophy [of a livable wage] is not wrong," he said. "It's not 1993 anymore. People need to be paid a wage they can live off of."