Checking the Cold War in 'Chess' 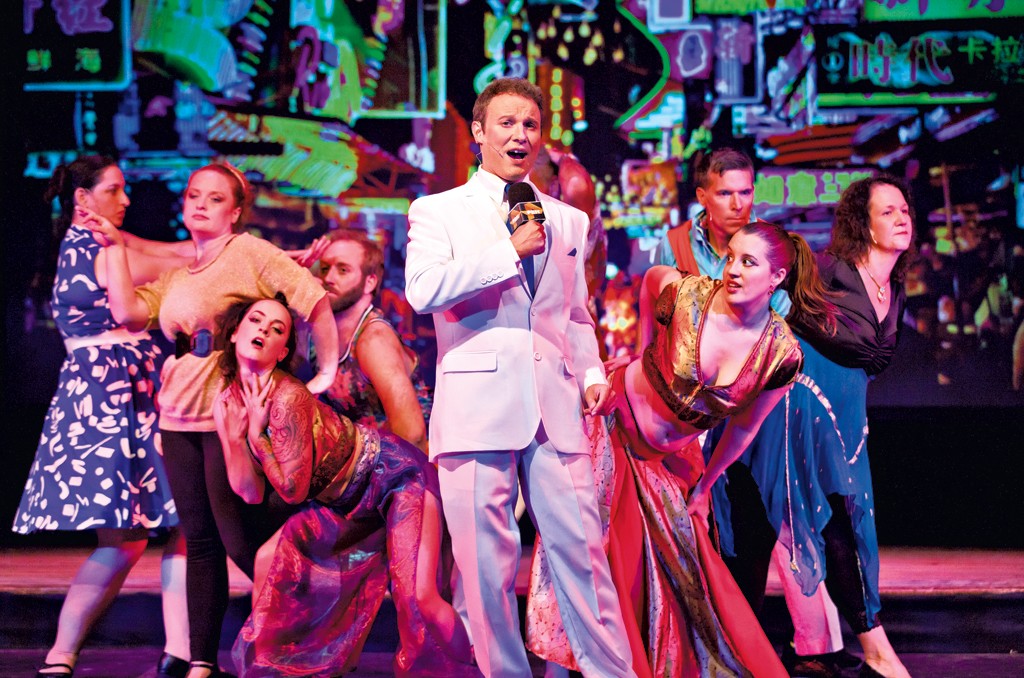 It's easy to understand why the 1972 chess "match of the century" between American Bobby Fischer and his Soviet opponent, Boris Spassky, was so closely and widely watched. During the Cold War, events such as chess tournaments and Olympic games allowed the rival superpowers to do battle without bloodshed. Friendly — that is, nonmilitary — competition between the USA and the USSR was preferable to the alternative; bragging rights have probably never meant as much, in geopolitical terms, as they did in that era.

What's less easy to grasp is why anyone would think that a work of musical theater centered on an international chess competition could make for a compelling stage spectacle. In terms of action, board games are about as flat as things get. Except for Twister, of course.

Yet lyricist Tim Rice (Jesus Christ Superstar, Evita) had a vision of a richer drama that begins where the chessboard ends, a vision he developed in the mid-1980s with playwright Richard Nelson and former ABBA band members Benny Andersson and Björn Ulvaeus. Credit goes to Stowe Theatre Guild and director Ian Ferris for sharing that vision in their production of Chess as a passionate play full of political intrigue, pathos and globe-trotting romance.

Inspired by the legendary Fischer-Spassky showdown, Chess is, at its heart, a story of ambition. And this production is nothing if not ambitious. The key players form something of a love triangle: American chess champion Frederick Trumper, played by James Blanchard; Soviet champ Anatoly Sergievsky, played by Erik Freeman; and Florence Vassy (Rachel Drew), who starts out as Trumper's assistant and lover before going over to the other side, so to speak.

Each character's personal history adds dimension to the political context of the play. For Trumper, the chess board is a home away from his broken home, and heartbreak and jealousy fuel his drive to antagonize his rival as Sergievsky's chess career unfolds. Sergievsky has enjoyed elite status and prestige for representing the Communist motherland so well, but he has lately become disenchanted with his role in Soviet political theater. Vassy carries with her the pain of having seen the Soviets overrun and repress the Hungary of her youth. Add headline-hungry western-media types and Machiavellian Soviet handlers to the mix, and the board and stage are set for an intense contest.

As in an espionage thriller, the plot of Chess twists and turns sharply and frequently. Sung dialogue is not ideal for conveying some key information. One is reminded of the stiff expositional lyrics in another '80s-era stage evocation of a 1972 diplomatic adventure, the opera Nixon in China. Rice and his fellow composers give the performers challenging material, to which the Stowe cast brings uneven talent.

Some of Blanchard's songs as Trumper seem to fall outside his comfortable range. His vocal exertions rather match his hotheaded character, however, and he uses that parallel to remain in character even when he strains to execute a number. Freeman fares even better at conveying Sergievsky's character through song. When his vocal stylings are rough, his acting is confident enough to carry the moment.

By comparison, Drew as Vassy turns in a strong overall performance marked by several impressive solo numbers and duets in which she seems to elevate the work of her male counterparts.

Among this cast, only Stacy Garrison's vocal talent matches Drew's. Playing the smaller role of Sergievsky's wife, Svetlana, Garrison appears late in the play to sing "Someone Else's Story," a poignant lament about how far she has drifted from her lover and husband.

Peter Schmeeckle as the Arbiter distinguishes himself effectively through song. Among his more memorable numbers is the first — "The Story of Chess" — in which he engages the cast in a brief history of the game.

The dance numbers in Chess, like the show's vocal performances, demonstrate the cast's enthusiasm and conviction as they bring dynamism to this somewhat heady tale. Brad Enos' choreography is serviceable and, at times, innovative, though the dance steps' execution is a bit loose from number to number. The show's most recognizable contribution to global pop culture, the song-and-dance number "One Night in Bangkok," succeeds mostly through the sheer exuberance of its singing, not through its shimmies and seductive passes.

Olivia Zoecklein dances en pointe in two numbers and demonstrates skill and artistry in ballet that's echoed by her dancing in the larger cast numbers. The en pointe numbers accompany the chess play happening at stage right, as though to offer a poetic commentary on the matches in progress. The effort is commendable but lacks an element of lighting or staging that might unite these disparate pieces into a coherent whole.

This failure is a little surprising, given how well Chess leverages other production elements. These include video projections on the upstage wall — the work of Ferris and Shawn Patrick Rice — that take the audience into such spaces as hotel rooms, ballrooms and train stations. The images may look more like Photoshop than MTV, but they work to set the scenes with arresting visual elements.

The Chess orchestra, under the direction of Nate Venet, anchors the production in its varied and shifting moods, helping to plumb the emotional depths and tumults of the play's characters and their vexing historical moment.

That some elements of Chess are not fully realized does not diminish the credit this cast and crew deserve for illuminating the curious brilliance of Rice's improbable play. The show does not arouse nostalgia for the Cold War. But it does awaken an appreciation for the difficulty of having been a pawn in that game.

The original print version of this article was headlined "Square Deal"