Checking In, and Out, at CBD Yoga

Several years ago, my college BFF breathlessly told me about a type of marijuana that didn't get you high. She was living in Berkeley, Calif., and had her medical card, a passport to the high-tech-pharmacy-meets-candy-shop-meets-knowledge-hub world of local dispensaries. She was hip; she was tuned in.

CBD, my friend relayed to me, was an isolated compound called cannabidiol, a cannabinoid that lacked the psychoactive effects of, you know, smoking whatever weed happens to turn up. I specifically remember that she said CBD had been developed by the Israeli military — a fact I cannot corroborate, but a quick Google search does indicate that Israel has been at the fore of marijuana research.

Fast-forward to present-day Vermont. CBD isn't just for Israeli scientists or medicating Berkeley graduate students anymore — it's freakin' everywhere. You can buy it in capsules and salves, add it to your morning coffee, or eat it in truffle form. You can find guided CBD meditations and even a CBD update on the boozy paint-and-sip model.

And now, in what seems an inevitable — and perhaps sensible — marriage of wellness crazes, CBD yoga is a thing. On a Sunday in late April, Jane Lanza and Kathryn Blume led one of Vermont's first CBD yoga classes at the Mystic Waters Day Spa in St. Albans, and I gave it a try.

As an occasional CBD user, and as someone who's practiced yoga off and on for nearly a decade, I wasn't especially nervous for this class. I was just curious and ready for a wellness infusion after a rather late Saturday night.

The day spa sits in a nondescript strip mall on Main Street. Owner Danny Barratt greeted students in the foyer, which is decked out with crystals big and small, leafy plants, and an apothecary of potions. The soundtrack is a soothing ripple of trickling water — said "mystic waters," perhaps? Barratt collected the $20 class fee and directed folks to the building's well-lit studio, dubbed the Sanctuary.

"Your yoga and your cannabis practice need to serve you when you're not on your mat or using cannabis." Jane Lanza tweet this

As students of all ages arrived, Lanza, 35, and Blume, 50, directed us toward mats and assorted accoutrements of yoga: blocks, blankets and bolsters. With a dozen or so of us assembled, class commenced — not with yoga, but with a crash course in the various historical junctions of cannabis and yoga.

Lanza received her professional certificate in cannabis science and medicine from the pharmacology department at the University of Vermont Larner College of Medicine last fall. She began class with a brief overview of plant medicine in a variety of spiritual traditions, including the ayahuasca ceremonies of indigenous South Americans, the presence of marijuana in ancient Taoism, and the contemporary ascetic Indian Sadhus who "smoke ganja all day long."

Like yoga, Lanza said, cannabis has long been used and developed for entwined forms of physical and spiritual wellness. "What we're doing is recognizing [a] natural connection," she said. "[We want] to recognize that [cannabis] can bring us closer to the universe ... and that it's a means of being comfortably embodied."

Lanza emphasized that both cannabis and yoga are tools — not ends in themselves. "Your yoga and your cannabis practice need to serve you when you're not on your mat or using cannabis," she said. 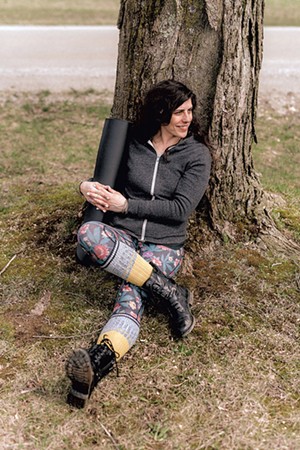 Lanza touched upon the biology of how CBD interacts with the body. She explained that our bodies come equipped with an endocannabinoid system designed to respond to cannabinoids. Cannabis, she noted, stimulates our sympathetic and parasympathetic nervous systems. In tribute to the plant's abilities, Lanza wears a gold, nameplate-style necklace of the THC molecule.

"Physically, there is a symbiosis," she said. "This is a plant that can actually make our system work better."

Blume, who has worked as a content and events manager for the local cannabis advocacy organization Heady Vermont since December, jumped in. With more than 30 years of yoga practice and teaching behind her — including some recent CBD yoga classes — she offered reflections on using both cannabis and yoga to constructively decelerate, mentally and physically.

"Anything that slows me down is a good idea," Blume said.

Following these quick lessons, Blume and Lanza turned their attention toward a bevy of Elmore Mountain Therapeutics CBD products and literature, arranged like a shrine at the front of the classroom. The women explained that they work with the Vermont-based company because its products are made in state with locally grown plants and blended with an organic hemp seed oil. And because Elmore Mountain Therapeutics proprietor Ashley Reynolds has enthusiastically launched a "CBD yoga ambassador" initiative.

For our session, students were offered a choice: a tincture to be administered under the tongue, a salve to rub on particular problem spots, or both. I opted for a generous dropper of tincture and put my salve aside for later.

What followed was more or less a standard, beginner-level yoga class — but better. Not long into warm-up cat-cow backbends, my mind felt quieter. Not tired or dumb, just calmer and less distractible. As I followed along with simple, slow sun salutations and warrior poses, I thought, Well, this makes sense.

Often, it takes an entire yoga class for me to feel like I'm finally ready to settle into my body. As silly as it might sound, with CBD I felt like I got a leg up on relaxation and could enjoy the practice more.

My fellow "cannayogi" Ben Gilbert agreed. The 23-year-old St. Albans resident had been attending Mystic Waters' Friday night yoga classes for about a year but had never tried CBD before. He said he was drawn to the class out of curiosity and appreciated its educational component.

"I felt really relaxed," Gilbert said. "I felt like I could really connect."

Blume and Lanza suggest that a part of their mission is helping to remove fear and stigma from the use of cannabis, with or without yoga. Lanza said that she is only just now beginning to publicly merge her yoga and cannabis practices. A certification grounded in science helps her feel confident in actively promoting the plant's healing properties.

"I was ready to bridge my cannabis knowledge with my yoga practice," Lanza explained. "[Now] I'm able to refute a stereotype that [CBD is] just for stoners, or it's a gateway drug."

"What I've been seeing over the past few months is that there is still a lot of fear and misinformation," Blume added. "There's a lot to learn still, but there's nothing to fear."

The original print version of this article was headlined "Worrier Pose"