Chasing Trump: Polite Critics No Match for the Donald 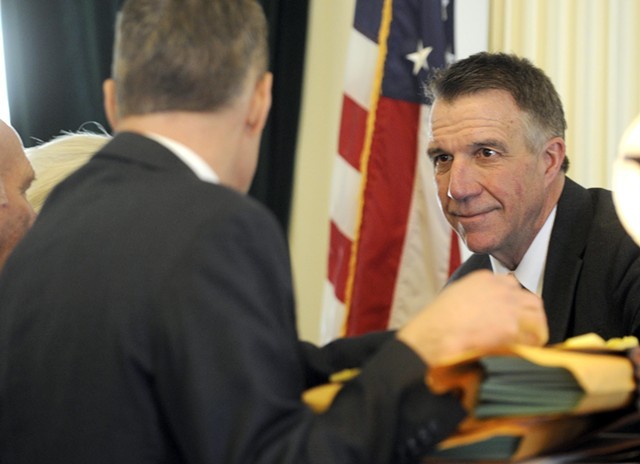 Upon closer reading, however, it became clear that the governor's intentions — just like those of Democratic officeholders — are no match for the power of a determined president.

In reality, four of Scott's five "action steps" are more talk than action. In one, Scott says he wants to "assess the constitutionality of the executive orders," which may lead to a legal challenge. But that's possible action sometime in the future.

Scott is also assembling a Civil Rights and Criminal Justice Cabinet, "charged with further review of the executive orders." The new panel may, at some future point, "make recommendations to the governor."

Skip to item No. 4: "reaching out" to federal officials "for further clarification." And finally, "coordinating with refugee program administrators and stakeholders ... to keep them informed."

Item No. 3 contains two separate initiatives, either of which would have more immediate impact than the other four combined. Scott will "elect not to enter the agreements suggested" by federal officials asking state and local authorities "to carry out immigration enforcement functions." Scott will also seek a new law that would prohibit local officials from making such agreements with the feds.

Those are tangible steps, but cautiously worded ones.

To be fair, the governor's in a bind. The state has limited room to maneuver, and he's going pretty far to take a (mostly rhetorical) stand against a president of his own party.

And it's not like Vermont Democrats are doing any better. Sen. Patrick Leahy (D-Vt.), Sen. Bernie Sanders (I-Vt.) and Congressman Peter Welch (D-Vt.) also questioned the constitutionality of Trump's executive order this week — and signed on to legislation that would overturn it. But that ain't going anywhere in the Republican Congress.

Democratic Attorney General T.J. Donovan, meanwhile, joined with 16 other state AGs in calling the move "unconstitutional ... un-American and unlawful." But in an interview Monday evening, he was not prepared to announce any actions — and he couldn't say when that might change.

Those are fine, noble sentiments coming from the occupant of an office with power but also responsibility to due process and the law.

But Donald Trump is playing a different game. State officials, and members of Vermont's congressional delegation, are fighting under Marquess of Queensberry rules. Trump is a pro wrestling heel with foreign objects in his trunks and a steel chair in his hands. He'll poke your eyes and kick you where it hurts. He isn't waiting for due diligence and deliberation and task forces and special cabinets. He cares not for your "informed decisions" as he controls the debate via Twitter and fires government functionaries whose actions displease him.

Trump will be on to the next outrage, or three or five or a hundred, while our dutiful officials conduct their colloquies. Not that I can offer any good suggestions, but the rhetoric about higher ideals and proper order seem downright feeble in the face of the Trump tsunami.

Near the end of our interview, Donovan referred to this as a "crisis of conscience." That's true, so far as it goes.

It's a crisis of conscience for comfortable white folks.

For the visibly different — in this case, for immigrants and refugees and anyone who might be mistaken as such by an overzealous official or angry citizen — "conscience" is a luxury they can't afford. This is an existential crisis, an emotional ordeal, a pervasive awareness of outsider status that might kick them in the ass at any moment.

Forgive them for being a little impatient.

Vermont's senior senator sounds a little pissed off. When discussing the confirmation hearings for President Trump's cabinet, Leahy punctuates his remarks with frequent sighs and expressions of exasperation. Sometimes he's at a loss for words.

"These things are really — it would be — well, I can see why Mitch McConnell wanted to cram them all up in almost the same day," he tells Seven Days, referring to the Senate majority leader's desire to finish the confirmation hearings as quickly as possible. "I think they are well aware that some of these people don't pass the laugh test."

Not that Leahy is laughing.

"It's worrisome," he says. "Somebody asked me the other day, 'You're the dean of the Senate. How would you rate this group?' I said, 'If I'm the dean, I'm flunking everybody.'"

For Leahy, this isn't about partisanship; it's about basic competence.

Leahy has a deep respect for the processes of governance, so he's giving the nominees full consideration. He says he's reading countless pages of testimony and documentation, interviewing nominees and quizzing fellow senators. He tries to keep an open mind. But as often as not, a Trump nominee falls short of his benchmarks.

Over the weekend, Leahy announced that he would vote against Sen. Jeff Sessions (R-Ala.), Trump's pick for attorney general. Previously, Leahy had cast a "no" vote for CIA Director Mike Pompeo, and he's announced his opposition to Betsy DeVos as education secretary.

At the same time, Leahy voted to confirm Secretary of Defense James Mattis, Secretary of Homeland Security John Kelly, United Nations Ambassador Nikki Haley and Secretary of Labor Elaine Chao. Sanders, who did not respond to requests for comment, has cast similar votes, though he opposed Haley's and Chao's confirmations. On Tuesday, Sanders voted against DeVos' confirmation in the Senate Health, Education, Labor & Pensions Committee.

Gov. Scott's budget includes $750,000 in new funding to market Vermont as a tourist destination and as a place of economic opportunity. But the agency charged with spending that money didn't ask for it.

"It came from the governor's office, not here," says Commerce Secretary Michael Schirling. He would happily accept the money, of course. He says it would address a "need for enhanced marketing efforts [that would] reimagine how we do marketing as a whole."

Schirling envisions a message that encompasses tourism, agriculture, education, opportunity and what he calls Vermont's "230-plus-year history of innovation and embracing technology."

That includes the sheep boom of the 19th century, we presume.

Not everyone agrees with the idea of more investment in state marketing efforts because, well, there's precious little evidence that they have any impact at all.

"Nobody knows how to answer the question of how effective this is," says state Auditor Doug Hoffer. In tourism marketing, the state's investment is a tiny fraction of what the private sector spends. There's no way, he says, to tease out the unique impact of the government's efforts.

In February 2015, state economist Tom Kavet produced an analysis of Vermont's tourism marketing. His conclusion was the same as Hoffer's: It might work, but there's no way to tell. His report was prompted by legislative consideration of a bill that would have increased funding to tourism marketing whenever proceeds of the rooms and meals tax went up.

This assumed a connection between tax revenues and the state's marketing — a connection Kavet termed "unsubstantiated by historical data."

For the recent past, that was an understatement. Between 2005 and 2014, state tourism and marketing expenditures dropped by 38 percent. In the same period, rooms and meals tax revenues increased by 26 percent. If the decrease in marketing had any impact, it sure didn't show in the numbers.

As for the idea of pitching Vermont as a business and employment destination, Hoffer is equally skeptical. "The factors that influence location decisions by people and businesses are so varied," he explains, "that it would be incredibly challenging to come up with some sort of regression analysis and say, 'OK, this is what that expenditure gave us.' I don't know that there's any way to do that."

Schirling acknowledges the lack of evidence but insists he can do better.

"If we use digital strategies well, then we will have more analytics," he says. "If the message is around starting new businesses, we should be able to measure whether that's going up or down."

Which would seem to suffer the fundamental flaw outlined by Kavet: Marketing is merely one of countless variables.

"Putting your finger on one thing as the causal factor is something we'll never really be able to do," Schirling acknowledges. "That said, we'll be able to do a lot more to paint a picture of whether our efforts are working or not."

Hoffer has heard that song before.

"Every few years there's an effort by business groups to say, 'We want more money for this,'" he says. "Many governors ask for the same things, regardless of party. I'm hoping the [legislative] committees will ask the right questions."

Regular viewers of WCAX-TV's afternoon news may have noticed a change at the anchor desk. Former 5 p.m. coanchors Roger Garrity and Bridget Barry Caswell signed off for the final time last Friday. This week, Darren Perron and Kristin Kelly took the helm. They continue to anchor the 6 p.m. broadcast.

Neither Garrity nor Caswell is leaving Channel 3. Garrity, in fact, was promoted to news director. He replaces Anson Tebbetts, who left the station last December to become Gov. Scott's agriculture secretary. Caswell, for personal reasons, decided to shift to a part-time role.

"It's a pretty big change in what my life is like," Garrity says. "But it was difficult to combine the two jobs. I wouldn't be able to devote enough time or energy to either job to do it well enough."

New boss, new plans? "We're assessing everything," he says. "We think we have a very strong product and a strong brand, and we want to continue that. We want to explore opportunities in the digital realm while trying to make our on-air presence as strong as possible."

A lot of young broadcasters cut their teeth at a small-market station like WCAX and then move on. Not Garrity. This month marks his 30th anniversary at Channel 3.

"I was born and raised in Vermont," he explains. "My family and friends are here, and I've loved working at Channel 3. I've had great opportunities, and I never seriously considered going anywhere else."