Charting the Growth and Challenges of Burlington Maker Space Generator

It's rare to hear the head of a nonprofit admit that, in fact, the organization should not work. But Chris Thompson, the outgoing executive director of Generator, will tell you that even as he stands in Burlington's 11,500-square-foot maker space: Such facilities often fail.

When Thompson and a group of other locals launched Generator in 2014, they had relatively low expectations. Generator was originally billed as a pop-up, an experiment in shared community workspace, in the basement of Memorial Auditorium on Main Street.

"We thought, The worst thing that could happen is, we'll just sell all the tools," Thompson said.

But in early 2017, Generator moved into its current location on Sears Lane in the South End; today, it has an operating budget over $500,000, according to its 2018 tax forms, and Thompson said he has 10 employees. Generator had 14 individual studio spaces at the old location; it now has 22 spaces and more than 400 members who pay monthly dues. Thompson, who was one of the founding board members, came on as Generator's executive director in 2017.

A maker space is a place where people with common interests gather to work on projects while sharing ideas, equipment and knowledge. It often has traditional woodshop and manufacturing tools, as well as computers and high-tech equipment such as 3D printers and laser cutters.

There are two reasons most maker spaces fail, Thomson said: "They lose their space ... because they have no money ... [Or] they're all volunteer and, without paid staff, all-volunteer maker spaces burn out. You kind of have to scale a little at the beginning ... And you're not going to get the scale if you're too specialized."

How has Generator managed to survive and grow, even becoming a role model for other nascent maker spaces around the state? For Thompson, the secret is in the diversity of its programs. They include a business training program for artists and entrepreneurs; yearlong projects to encourage women and gender-nonconforming high school students to explore science, technology, engineering and math; hands-on workshops for groups of kids and teens; a contest for product pitches; a lecture series; a mentorship program; and advanced manufacturing training for high school students.

Maggie Robinson, Generator's director of community outreach, said she was often the only girl in her high school shop classes. Today, her priority is making sure underrepresented people get a chance to explore the maker space's tools. More than half of the participants in Generator's outreach programs have been women, she said.

Vermont is home to a few other maker spaces, including the MINT in Rutland and the Foundry in Lyndon. Jim Schenck, cofounder and former president of the Foundry, said that while Generator serves as the model for the other spaces, not every choice it makes would necessarily work for his organization in the Northeast Kingdom. He noted that as Generator grows and matures, its staff and members seem to have less time to engage in small community and civic events, such as fairs. 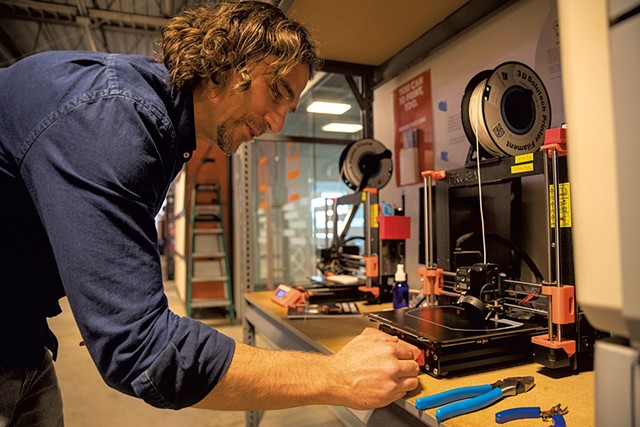 The Foundry operates three days per week from the shop space at Lyndon Institute, a boarding high school, and about 40 people regularly use the space, Schenck said. He added that the Foundry doesn't have to focus on income because the school donates the space.

"In our current organization, we are really blessed with the ability not to be rigorous about the dollars. Not everything has to turn a profit," he said. "We're lucky enough to be flexible in the way we do it."

Like Thompson, Schenck said that a diversity of offerings is key to the Foundry's existence. "We know that if we try to specialize too much ... we'd be long gone," he said.

A stroll through Generator's space reveals an incredible range of works, some in progress and some completed. It's hard to miss the neon-lit racing track for drones, strung from the ceiling. Built by Vermont Drone, a drone photography company, it's reportedly the first permanent indoor drone-racing course in the country. Some makers have designated studios, which are cubicles that line the outside of a common space with tables, but they can still see and talk to each other.

Travis Vogel's studio holds prototypes of beverage display racks — simple stands that use springs or gravity to make a can of wine or seltzer pop into place when the can in front of it is removed.

In one corner sits a full-size Donkey Kong arcade game, a vintage game that Jake Blend is restoring. On the opposite end of the room, Marcus Bretto makes high-end violins, right down to custom varnish designed to hold up for hundreds of years.

The wooden skeleton of a standup paddleboard sits outside the woodshop, waiting to be filled with foam by Marc Heinzer, a professional boatbuilder. Out behind the building, lamp sculptor Clay Mohrman is constructing a massive arch out of driftwood.

"It really is — excuse the buzzword — a place where community is built." Christine Hill tweet this

"[It's] a space that caters to so many different populations, be it artists, entrepreneurs, engineers, designers," said Christine Hill, Generator's director of communications. She was one of the first graduates in its entrepreneurship program, through which she developed her jewelry business.

"People come for a very specific reason with very specific goals, but then they'll cross paths with somebody from a totally different discipline," she said. "There's just this magical element to the whole thing, where it really is — excuse the buzzword — a place where community is built."

Twenty-two artists and makers rent studios for $270 to $295 per month; another 400 pay $95 for a monthly membership, which allows access to all of the tools and common workspaces. Corporate memberships start at $3,000 annually; companies can purchase these for business development or for use by their employees.

Fabricator Matt Flego said that Generator "drastically changed my life." He was one of the first studio members of Generator when it opened in Memorial Auditorium. In a neighboring cubicle, Aaron Wisniewski "was just making stuff that was very different from everyone else," Flego said. Wisniewski was a scent designer who later cofounded Alice & the Magician Cocktail Apothecary, a company that makes aroma essences for use in bars and kitchens.

Years after their first encounter, Flego and Wisniewski, along with a few other partners, launched OVR Technology, which produces scents to accompany virtual reality experiences.

Dan Harvey, the president of Generator's board of directors, said he often gets calls from people in other cities around the state hoping to start maker spaces. He said he thinks Generator's success would be hard to replicate, because it relied heavily on philanthropy in the beginning. Generator started with $75,000 from private donors, according to board member and Generator cofounder Michael Metz.

"That's why, when Chris came on [as director] a few years ago, I said, 'We're not a startup anymore,'" Harvey said. "We need to be less reliant on philanthropy and more reliant on earned income."

He's happy with the progress the organization has made in that direction. In 2018, 42 percent of Generator's revenue came from earned income — class fees, memberships and studio rentals — according to its impact statement. The rest came from philanthropic gifts and grants.

Harvey's biggest concern for the future is ensuring that Generator's ambitions don't expand beyond its capabilities, and that its leaders don't overextend themselves by embracing every new opportunity that arises.

"It's fun being the cool thing, but it's easy to get distracted," Harvey said. "It's the distraction that I worry about undermining Generator, more than anything." 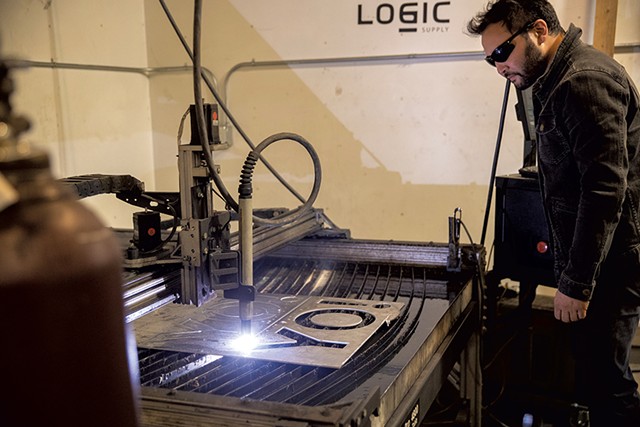 The organization is also currently searching for its fourth executive director in five years. Thompson will step down from the position at the end of this year to focus on his own art, though he'll rejoin the organization's board.

Before him, Lars Hasselblad Torres — who'd previously founded Local 64, a coworking space in Montpelier, and worked as director and sole employee of the state's Office of the Creative Economy, now defunct — held the job for about two years, then left abruptly in 2017. Harvey shared a statement with Seven Days that the board had issued about Torres' departure at that time. It said that Torres "moved on to pursue other opportunities" and thanked him for his contributions to the organization.

Torres, who's currently the executive director of a maker space in Massachusetts, responded by email to a Seven Days inquiry. "For nearly three years I had the opportunity to grow Generator with an extraordinary team of staff and volunteers," he wrote. "We transformed the organization from a foundling startup in the basement of Memorial Auditorium to a world-class community asset. I can't comment beyond that other than to say that it would take a lot to knock the organization off that trajectory."

Before Torres, Christy Mitchell was Generator's executive director, from 2014 to 2015. She left the job to focus on the S.P.A.C.E. Gallery in the Soda Plant, which she founded. In addition to directing that venue, which includes small artist studios, Mitchell took the position this summer as executive director of the South End Arts and Business Association.

Harvey is taking Generator's leadership changes in stride. "There's been some turnover. Am I worried about it? Not at all," he said. "I'm really looking forward to seeing who we can find." He added that he'd be perfectly happy to find "another Chris."

For his part, Thompson said he hopes the new director will have strong administrative skills.

Harvey works at the University of Vermont in the office of the vice president for research, which he said plays a key role in the state's economic development. By helping small businesses and creating jobs, Generator encourages UVM graduates to stay in the area, he said. UVM, like Saint Michael's College and the Community College of Vermont, utilizes Generator's space for some class offerings. Generator leases its quarters from Champlain College, which has a designated area within the building for its own students to work.

In October, Generator will begin its latest Jump/Start program, an entrepreneur development training and business incubator. Jump/Start participants get free access to Generator's space, mentoring from industry professionals and a stipend. The upcoming session will focus on helping artists build their businesses.

Elliott Katz, the maker space's operations director, is an artist himself. He's particularly enthusiastic about different varieties of computer-controlled cutting machines, including a laser cutter for small prototypes and a machine called a plasma cutter, which uses large amounts of electricity to heat sheets of metal and then cuts through them with compressed air.

During Seven Days' visit, Katz donned protective sunglasses with thick, green-tinted lenses to demonstrate. With the press of a few buttons, the plasma cutter was spitting sparks, cutting a solid sheet of metal into a Vermont-shaped bottle opener in a matter of seconds. It was somewhat terrifying and very cool. With roughly six hours of shop training and a membership to Generator, anyone can wield the power of the plasma.