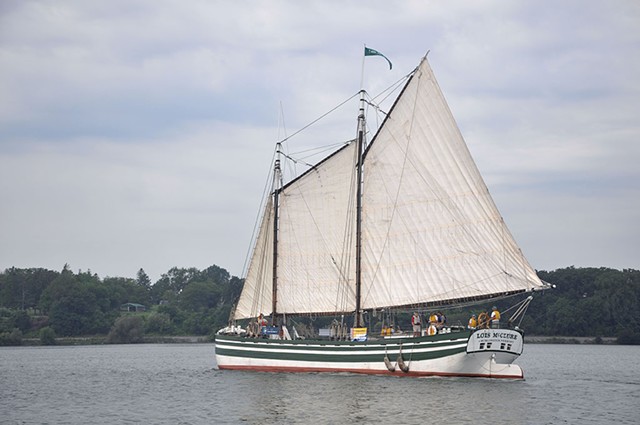 Steve Page devoted three years to building the Lois McClure but spent very little time sailing on it. As one of four shipwrights hired in 2001 by Lake Champlain Maritime Museum in Vergennes to construct the 1862 replica canal schooner, Page can recall just two trips he ever made on the vessel. Only one took place on the water.

On his first trip, Page stood on the boat's deck during its three-day overland journey from its construction site in the Burlington Shipyard to the boat ramp at the U.S. Coast Guard station a mile away. His job was to ensure that the 88-foot wooden schooner didn't snag any trees or power lines as it crept through the streets of downtown Burlington on a massive house-moving trailer.

Page was also aboard the Lois McClure for its maiden voyage on July 3, 2004. The Williston resident, now 75, still remembers what the maritime museum's then-executive director, Art Cohn, said to him and his fellow shipwrights on the day the boat launched: "If it leaks, you take care of it."

It didn't. For nearly two decades, the Lois McClure sailed thousands of miles, from New York City to Québec to Buffalo, N.Y. More than 300,000 visitors boarded the vessel at its numerous ports of call along Lake Champlain, the Hudson River, the Richelieu River and the Erie Canal.

Now, after nearly 20 years of service, the Lois McClure is slated to be decommissioned in November 2023. For the more than 200 volunteers and crew who helped build the boat or sailed on its many educational excursions, the news was greeted with a mixture of pride, sadness and even bitterness. While the boat's ultimate fate has yet to be decided, it will likely be dismantled, analyzed and featured in a new maritime museum exhibit that explores the life cycle of 19th-century canalboats.

"This is a really hard transition, but ... our goal was to create a responsible plan for the boat, which we didn't have before," said Susan Evans McClure, executive director of Lake Champlain Maritime Museum. (Evans McClure is unrelated to Lois McClure or the McClure family that funded much of the $1.2 million project.)

"Wooden boats rot, and that's what would happen, and it would be really sad," she added. "That is not the end we want for it."

The museum launched the Lois McClure replica project in 2001 to highlight the history of 19th-century canal schooners. Canalboats were essentially the tractor trailers of their day, Evans McClure explained. They plied the waters of New York and New England in the mid-1800s, when Burlington was the third-largest timber port in the country and most freight traveled by water. In addition to lumber, canalboats hauled coal, hay, grain, stone and livestock.

The holds of the Lois McClure were built to carry 120 tons, including slabs of marble quarried in central Vermont that are still used as ballast.

The design of the replica schooner was based on 1842 drawings and two well-researched shipwrecks in Burlington Harbor: the General Butler and the O.J. Walker. All the shipwrights hired to build it were trained in scuba diving so they could see for themselves the wrecks just outside the breakwater. They rest not far from Lake Champlain Transportation's Burlington Shipyard, where the Lois McClure was constructed.

"It was a really nice gig, a once-in-a-lifetime opportunity." Steve Page tweet this

Mary Ellen Manock of Burlington was a volunteer on the project who sewed curtains for the ship's cabin; she later worked as an onboard docent for several excursions to New York. Her husband, Jerry, also volunteered on woodworking and rigging.

"I always thought it was funny that they designed it on boats at the bottom of the lake," Mary Ellen Manock said.

But Mike LaVecchia, project coordinator for the Lois McClure's construction, pointed out that having the shipwrecks nearby was helpful during the building process.

"A lot of replicas are built based on photos or drawings or maybe a boat in a museum somewhere," said LaVecchia, who now builds wooden surfboards in York, Maine. "Having an intact actual wreck from the 1800s basically 200 yards from where you're building the boat, that they could go and dive on, made it pretty unique, for sure."

Page built and repaired boats for 40 years, but none, he said, was on the scale of the Lois McClure. He remembers working with wooden planks 60 feet long and three inches thick that were steam-heated to bend into the shape of the hull.

While most of the wood used in the construction, including white oak, white spruce and pine, was logged in northern New England or New York, he said, the ship also has mahogany that was donated by the National Aeronautics and Space Administration. NASA had once used the tropical wood to make molds for space shuttle parts.

"It was a really nice gig, a once-in-a-lifetime opportunity," Page said. "I was very lucky."

Though Page and the Manocks were saddened to learn that the Lois McClure was being decommissioned, all three said they understood the decision.

"The thing that would be worse would be to let it deteriorate and possibly have a major failure," Jerry Manock said.

Page agreed. "Traditional wooden boats are very, very expensive to take care of," he said. "I'm sure it was a decision that was pondered extensively."

Indeed, the $100,000 annual cost of repairing and maintaining the Lois McClure was one of several reasons why the museum decided to mothball it, Evans McClure said. The replica was built to be as historically accurate as possible and thus was never compliant with the Americans With Disabilities Act, she explained.

In addition, because the ship was based on a 19th-century design, it lacks the rigorous life-safety standards applied to 21st-century sailing vessels. For this reason, she said, the Coast Guard wouldn't license it to take the public sailing, which further limited access and revenue.

Finally, Evans McClure said, the Lois McClure has already had a longer life than most 19th-century canal schooners. Assuming one didn't sink or meet some other untimely demise, a typical canalboat lasted only about 15 years, after which its owners stripped it for parts, then scuttled it and built a new one.

"They were meant to be used, and they got beat up," she said. "That's why there are a lot of shipwrecks of them out there."

But some of the past participants on the project wish the museum were pursuing other options.

"It seems premature to me," LaVecchia said about the decommissioning. "My hope is, they'll take a little more time to think it through, because once you make that decision, there's no going back."

Paul Rollins agrees. As the lead boat builder on the Lois McClure, he, too, was surprised that a sturdy wooden vessel built just two decades ago was already being retired.

"The person in charge now is probably not a boater and is not enthusiastic about that type of stuff and doesn't appreciate what normal maintenance is," said Rollins, who still builds and repairs boats in York, Maine. "I think there's a different culture of boating up there [in Vermont] than here on the coast, where boats are not just recreational."

But Lake Champlain Maritime Museum hasn't finalized its plans yet, Evans McClure pointed out, and it remains open to partnering with another organization that could take over the operations and maintenance of the Lois McClure. Thus far, however, none has come forward.

"We've done a lot of asking and a lot of looking around," she said, "but that's a lot for another organization to take on."

Assuming that doesn't happen, the Lois McClure could become part of a new exhibit that traces how canalboats were built, used and eventually retired.

Nineteenth-century canalboats didn't winter on Lake Champlain because they would have been crushed in the ice, Evans McClure explained. Instead, the boats' owners sailed them south in the fall to protected ports along the canals or the Hudson River, then rafted them together in groups of 10 to 20 boats. Canalboat families lived in seasonal communities and sent their children to school together while their boats were moored, then resumed their work in the spring.

Even though the Lois McClure isn't underwater, Evans McClure said, the museum's archaeologists want to examine it and compare it to assessments of the General Butler and other canalboat shipwrecks: What did the replica builders get right or wrong? Where's the wear and tear on the ship compared to actual 19th-century vessels? And what can the Lois McClure teach us about how boats of that era eventually fell apart?

Regardless of the Lois McClure's final path, the maritime museum plans to create an archive of oral histories and testimonials about the vessel, including its construction, travels and eventual decommissioning.

"It is coming off the water, but that is not the end [of the Lois McClure]," Evans McClure added. "We will continue telling her story."

The Lois McClure is open to the public at Lake Champlain Maritime Museum, 4472 Basin Harbor Road in Vergennes, from May through October in 2022 and 2023. lcmm.org