Charm Offensive: Team Scott Reaches Out to the Legislature 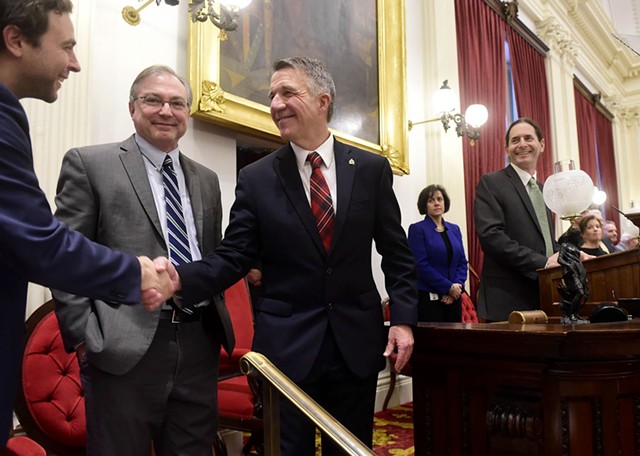 The November election brought reelection for Republican Gov. Phil Scott and a thorough drubbing for his party. Afterward, one big question remained: How would the governor react?

In his first two years, Scott vetoed the Democratic legislature's budget three times. He also prolonged each year's lawmaking session, in part by introducing major proposals late in the game and refusing to budge.

Now that Democrats and Progressives have veto-proof majorities, would he continue to stand his ground? Or would he look at the new landscape and seek to open new lines of communication?

The answer is becoming apparent.

"Feels different, looks different, sounds different," said Senate Majority Leader Becca Balint (D-Windham). She cited a telling detail: Scott's weekly open-door coffee hour has been moved to an earlier time, when lawmakers are free to attend. Balint has taken the opportunity to converse with Scott and chief of staff Jason Gibbs. "I didn't feel that either of them were armored up," she said.

"I got a call the day after the budget address from a member of the administration who said, 'Hey, I'd like to chat about the budget.' I didn't hear anything like that before," House Speaker Mitzi Johnson (D-South Hero) said. "I've told the governor I see the signals he's sending and let him know I appreciate it."

Assistant House Minority Leader Rob LaClair (R-Barre Town) has been advocating a more collaborative approach to lawmaking. He's happy to see the administration pursuing the same course. "I see them being more inclusive earlier," LaClair said. He noted that this year, Scott has proposed his own version of paid family leave. Last year, Scott allowed the legislature to act and then vetoed the bill.

Legislative Republicans signaled a new approach of their own at a press conference last Friday. Senate Minority Leader Joe Benning (R-Caledonia) talked of "a new wind blowing" and a move away from simply being "the party of 'No.'"

"I've already met twice with [Scott's chief counsel] Jaye Johnson, especially on marijuana," said Sen. Dick Sears (D-Bennington), chair of the Senate Judiciary Committee and an advocate for cannabis legalization. "I got a call from [Administration Secretary] Susanne Young wanting to talk about the budget. That hadn't happened before."

Young was flattered by that characterization but also pushed back a bit. "We have been open and approachable, but apparently there's a perception that we have not," she said. Still, she acknowledged that the administration has become more proactive. "We have been reaching out to key committee chairs to get their reaction to the governor's budget," Young said.

Lawmakers say they heard a new tone in the governor's inaugural and budget addresses. "His presentation felt more like the Phil Scott I sat next to for 10 years," said Senate Finance Committee chair Ann Cummings (D-Washington), who served with Scott when he was a senator and then lieutenant governor.

"In the past, it was, 'We will do this' and 'I want this on my desk,'" said Rep. Janet Ancel (D-Calais), chair of the House Ways and Means Committee. "Now it's 'Here are some ideas I'm putting on the table to start a conversation.' I welcome this more collaborative approach."

Young pointed out that communication is a two-way thing. "Within days of the governor presenting his budget in previous years, there was not much room for testimony or communication," she said. "What we got was, 'Find a plan B.' We see the legislature as more open to ideas they may not be crazy about."

Then again, Scott's budget speech was short on dramatic ideas that might prompt immediate rejection. That's at least partly a reaction to Democratic/Progressive supermajorities. "Certainly the makeup of the majority and minority in the House is taken into consideration," Young said.

Whether the administration's charm offensive stems from an outbreak of goodwill or a capitulation to electoral reality, top Democrats say they are ready to respond in kind. "There's a lot of agreement about what we want our state to look like," Ancel said. "There's ground for substantive, positive conversations."

The optimism comes with a side of caution. The tough battles have yet to be fought. One potential flashpoint will come after Town Meeting Day, when local voters will have their say on school budgets. Then the Agency of Education will calculate the property tax rates needed to fully fund the budgets. If tax increases are required, Scott may well turn back into Governor No.

"We'll have to go through the session and see if we get the, 'I'll veto the budget unless you do what I want' threat," Cummings said. "We're definitely starting out in a better place than the last two years."

When Meagan Downey took her daughter to the Champlain Valley Fair last year, she wasn't expecting the day to result in political activism. But it did.

"We saw the sign for the exhibit," Downey said. "I didn't think it was real. We went in. I felt anger and sadness."

Inside the tent, just as advertised outside: the World's Smallest Woman. A living, breathing little person, 29 inches tall, sitting on a chair. Some passersby engaged her in conversation but, according to Downey, others pointed and laughed.

It seemed like a remnant of a bygone, benighted era. The Shelburne resident complained to fair management and contacted Rep. Jessica Brumsted (D-Shelburne), urging legislation to bar such exhibits.

Brumsted, along with Rep. Kate Webb (D-Shelburne), has introduced H.21, which would prohibit the display of individuals for money. "I think it deserves discussion," Brumsted said. "Exploiting people's differences just feels wrong."

Whether or not the bill passes, it's likely that Vermont has seen the last of the World's Smallest Woman. "The exhibit will not be back, nor will any like it," said Tim Shea, executive director of the Champlain Valley Exposition, which operates the fair.

How did this, ahem, "attraction" wind up at the fair in the first place? "We lease out a portion of the fairgrounds to ride operators," Shea explained. "They bring in rides, food vendors and attractions."

The operator in question is Orlando-based Strates Shows, a third-generation family business founded almost 100 years ago. In earlier days, Strates shows featured many attractions that are now out of fashion: caged animals, "girlie shows," "freak" shows and oddities.

The company has changed with the times. "We realized you get a better return when you market yourself as good, clean family fun," said James Strates, grandson of the founder and the firm's current operations director. "Having grown up in the industry, I understand. People don't want to see people with disabilities on display."

Not that modern hands are entirely clean. "There are reality shows with little people," Strates noted. Point taken. Shows devoted to physical extremes, including the morbidly obese and those with obscure medical conditions, are a mainstay for cable television. The voyeuristic impulse remains strong.

Speaking of which, does "the display of individuals for money" include strip clubs? The annual Vermont Burlesque Festival? Carnival attractions such as contortionists and sword swallowers? Is it more acceptable if a "display of individuals" has an artistic component? If so, who's to judge?

"The bill is narrowly defined," Downey argued. "It allows for artistic and scientific display."

State Rep. John Killacky (D-South Burlington) serves on the House General, Housing and Military Affairs Committee, which will consider H.21. As former executive director of the Flynn Center for the Performing Arts, he brings a perspective all his own. At the Flynn and elsewhere, he has booked performers who put their own bodies at center stage. He cites English actor, musician and disability rights advocate Mat Fraser, who was born with phocomelia, a condition that causes malformed limbs — in Fraser's case, short arms and splayed fingers.

"He has performed at the Flynn," Killacky said of Fraser. "In his shows, he ends up being naked. He wants the audience to be confronted with his arms. He demands the audience's gaze."

Fraser, who has played the lead role in a production of William Shakespeare's Richard III and appeared in actual freak shows as "Seal Boy," seems intent on erasing the lines between art and exploitation. (Fraser also acted in the "Freak Show" season of the TV series "American Horror Story," as did the person listed by Guinness World Records as the world's actual smallest woman: India-born Jyoti Amge, who's barely over two feet tall.)

"Freak shows can be degrading, but it's also a way to make a living," Killacky said. "Did [the World's Smallest Woman] have her own agency? Is she making a living? Is it her choice?"

Good questions. The woman — or women, as we shall see — remained in the shadows. Strates had no information. His company hires a subcontractor to provide such attractions — Orlando-based Four C Productions, founded by the late Jack Constantine.

"We've had several different World's Smallest Women," all from Haiti or Jamaica, said Jack's daughter, Lindsey Constantine. "One of them built a five-bedroom home in Haiti and sent her grandkids to college. She makes a very good living."

It'd be nice to hear that from the women themselves, but Constantine declined to provide contact information. "They're sensitive about publicity," she said.

That may be prudent. Vermont isn't the first place where the exhibit has caused trouble. In 2008, the New Mexico State Fair shuttered an exhibit featuring "Tiny Tina." Colorado's Boulder County Fair closed down "Little Liz" in 2014 after getting complaints.

Constantine is defensive about critics and the proposed Vermont bill. "The only person they're taking anything from is [the woman] and her family," Constantine said. "I'll do my best to book her in other cities."

Shea has taken the issue to the Vermont Agricultural Fairs Association board, which is likely to ban such exhibits. They'd prefer to act on their own rather than see a new law on the books.

"That's concerning to me," Downey said. "We need it in law so it's not on a case-by-case basis."

But even Brumsted, cosponsor of H.21, doesn't necessarily agree. "The purpose is not necessarily to pass a law but to spark discussion and perhaps improve the situation without a law," she said.

Of course, if enough states "improve the situation," the various World's Smallest Women will have to find other ways to make a living.