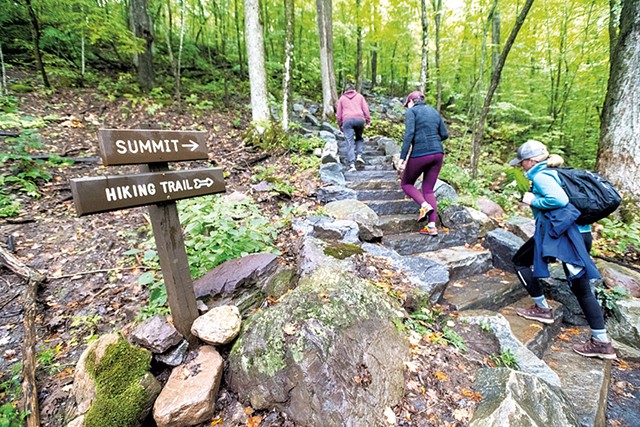 The view from the summit of Mount Philo is iconic. A popular image on social media, the patchwork of Charlotte's verdant farmland, fluffy clumps of forest and the silver span of Lake Champlain is unmistakable to anyone who's hiked the 968-foot mountain.

About four miles from the shore, Mount Philo State Park offers a closer, more dramatic and elevated view of the lake than any other public land in the area. Established in 1924, Mount Philo was Vermont's first state park and is still the most popular one in the Green Mountains, with attendance skyrocketing in the 21st century.

"There's a time and a place where a redesign is needed." Josh Ryan tweet this

But that increased popularity comes at a cost. Allen said foot traffic along the park's winding trail system has deteriorated it to an unsustainable state "because [it] wasn't created with that level of use in mind."

Now, just a few years ahead of the park's centennial, the state is taking action to maintain one of its recreational crown jewels. After a competitive bidding process, the Vermont Department of Forest, Parks and Recreation chose trail design and construction company Timber & Stone to give the Mount Philo trail system a redesign and overhaul, which began in 2020.

Timber & Stone isn't just laying down fresh pathways. It's installing a visually striking feature to the new, combined Summit and Campground trails: an impressive system of stone staircases. The new trail's entrance is partway up the mountain, across the access road from House Rock Trail, which begins at the parking lot. The plan is to finish the project before winter, or by May 2022 at the latest.

"There's a time and a place where a redesign is needed," said Timber & Stone principal trail designer and builder Josh Ryan. "And this is the time." 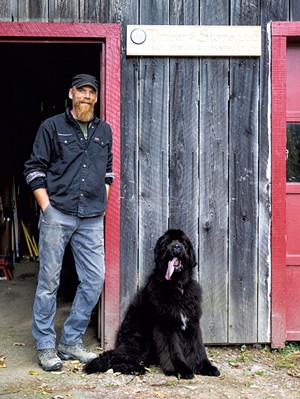 Mount Philo's proximity to Burlington — about 16 miles from downtown — makes it a no-brainer destination for tourists. It's also the rare Vermont mountain that has a drivable road all the way to the summit.

The mountain's sheer popularity isn't the only reason for the decaying state of the old trails. Heavy use combined with natural erosion to create "huge gullies [and] very unstable soils," Ryan said. Hikers often had to grab nearby trees to support themselves as they navigated the treacherous terrain, damaging those trees in the process.

Based in East Montpelier, Timber & Stone has more than 15 years of experience making the kind of staircases it's building on Mount Philo, as well as bridges, plank boardwalk systems and timber-frame structures. The company's work can be found all over Vermont and the Northeast, and even as far as away Illinois.

Formerly an employee of the U.S. Forest Service and other natural preservation organizations, Ryan founded Timber & Stone in 2004 and has an extensive background in conservation and forestry. Though the work his company does is massive, just four employees do it all.

Funding for the Mount Philo redesign came from various sources, including the federal Recreational Trails Program and the CARES Act, legislation that was enacted as part of the nation's pandemic stimulus plan.

"The state really leveraged outdoor recreation as part of its pandemic response," said Jessica Savage, manager of the state's Land and Water Conservation Fund Program. That's why Vermont ended up with significant CARES Act funds for the Mount Philo project, she said, noting that funding more typically comes from sources such as the Recreational Trails Program. 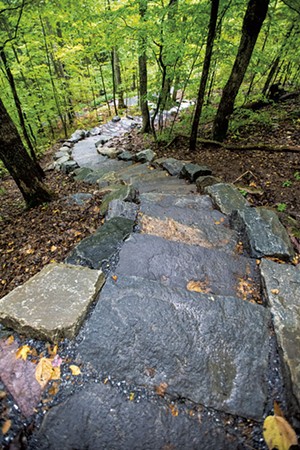 On a recent Wednesday at the Mount Philo worksite, Ryan pointed out some key differences between the old trails and the new one. The old trails are so battered they're barely distinguishable from the surrounding forest. They will fade into memory as they're overtaken by and absorbed back into nature.

The new trail, by contrast, is a pristine, defined path. Timber & Stone gave it "an alignment that made the best use of existing topography," Ryan said.

So far, the company has finished upgrading only the upper portion, as well as creating some new, ADA-accessible trails on and around the summit. The lower portion is still open, but hikers will notice a stark contrast as they're rerouted from the old trails to the new on their ascent.

The new trail surface, called tread, is a bluish gravel mixture laid over chunkier crushed stone; between these layers is geotextile fabric, which helps with drainage and stability. All the stone mixtures came from New Haven's Pike Industries, known for its production of asphalt and other construction aggregates.

But the new trail's most eye-catching features are the stone staircases, which will total around 300 individual steps. Rather than a continuous flight, they're scattered throughout the trail, appearing wherever the ratio of rise to run exceeds 10 percent.

Each set of stairs must have at least two rises (i.e., the vertical distance from the flat top of one step to the next one). And Ryan has carefully measured the run, or length, of each step to help hikers maintain a natural stride and gait.

Small boulders called gargoyles flank each staircase. Though they're aesthetically pleasing and integral to the staircase's structure, Ryan said, one of their primary purposes is psychological. The gargoyles guide people onto and up the stairs so that they don't step around them — keeping people literally in line and off the forest floor.

One breathtaking staircase is on the western side of the mountain, just below the summit. Dozens of steps wind a crooked path up the side of a relatively steep grade. The scene has an almost mythic quality, like something out of "Game of Thrones" or The Lord of the Rings.

To build that staircase, Timber & Stone employees drove stones from the material staging area in the upper parking lot to the edge of the drop-off. They then lowered the stones into place with cables — kind of like zip lines, Ryan said — letting gravity do as much of the work as possible to guide them into place. 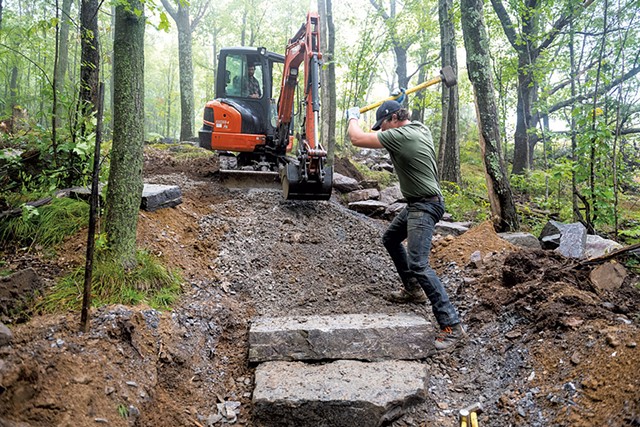 The company laid down the shorter staircases on the trail with heavy-duty construction vehicles. Timber & Stone partner and trail designer-builder Pete Hiser hopped off one such apparatus to talk to Seven Days. He reckoned each step weighs between 250 and 800 pounds.

The Charlotte native grew up with the mountain practically in his backyard, which adds a layer of personal significance to his involvement.

"As I got older, this park became so popular and the old trail got so muddy that, a lot of times, people just walk up the road," Hiser said. (Indeed, this reporter saw many hikers doing just that.)

Hiser said he never dreamed he'd be doing this kind of work on the mountain.

Ryan has already received plenty of positive feedback on the work Timber & Stone has done so far.

"'It's like hiking up a castle in the clouds,'" he said, repeating the words of a weekend hiker. "People have pulled us aside and have just been awestruck."

The original print version of this article was headlined "Taking Steps"