As always, this weekend's Burlington waterfront music festival Grand Point North will be headlined by founder Grace Potter. The 2016 lineup includes Old Crow Medicine Show, Guster, Kaleo and many other musicians — but there's stuff to see as well as hear. One of the fest's annual offerings is an installation called "Grand Point Weird," curated by Potter's older sister, artist Charlotte Potter. This year, the show focuses on the Abenaki Lake Champlain creation story. It's a timely choice, given the recent surge of public attention to indigenous land rights, spurred by the Standing Rock Sioux Tribe's protests against the Dakota Access Pipeline.

The Abenaki story begins like this, according to Vermont Abenaki artist and educator Judy Dow:

"A long time ago, the Great Spirit created this world that we live in with all the colors and all the beauty. He wiped the dust from his hands, and it fell to the earth. Odzihozo, the transformer ... picked up this dust and began to gather himself, began to transform himself."

Charlotte is the glass-studio manager and programming director at the Chrysler Museum of Art in Norfolk, Va.; this is her fourth year orchestrating "Grand Point Weird." The flippancy of the installation's name is deliberate, she said in a phone interview — part of her effort to make contemporary art more accessible to the public. "People think contemporary art is weird," Charlotte noted.

This year's GPW will be anchored by a live mural painting by Brooklyn artist Esteban del Valle, who attended graduate school at the Rhode Island School of Design with Charlotte. He'll render his interpretation of the creation story across six plywood panels, resulting in a 24-by-6.5-foot finished piece. "We wanted [the work] to be pertinent to the actual site that we were on," Charlotte explained.

Del Valle told Seven Days by phone that the mural format lends itself to the narrative layering of time and space. To that end, he'll paint a present-day storyteller as narrator of the ancient story, which will showcase plenty of landscape and wildlife details. Some of his paints will be fluorescents responsive to black lights.

Students from the Vermont Governor's Institute on the Arts will aid del Valle in constructing and painting the mural, as well as in bringing its story to life with visual and performing arts. At this summer's two-week session for high schoolers at Castleton University, which took place in June and July, students participated in brainstorming and creating a variety of works to be shown at the fall festival. 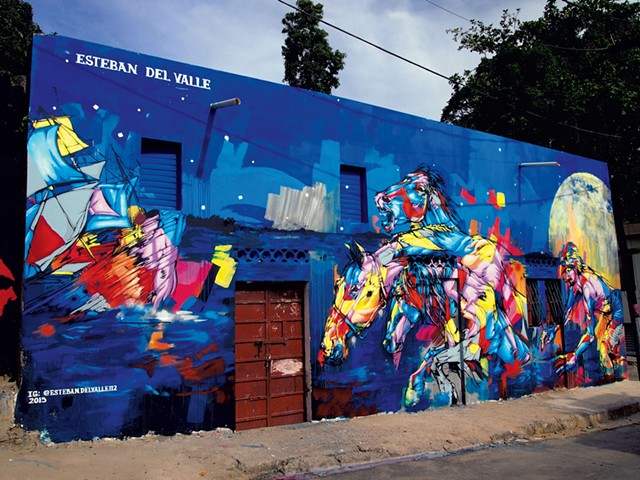 For GIA student Calleen Ferris, 17, now a senior at Bellows Free Academy of Fairfax, this summer was not her first time hearing the Abenaki story. Ferris remembers Dow visiting her third-grade classroom in Randolph, she said in a phone interview. She had the opportunity to work with the Abenaki teacher once again in her morning beading class at the summer institute. In the afternoon, Ferris worked with Eddy in a class called Clowning Around; she'll perform with fellow classmates at GPN. She's eager to be reunited with her GIA cohort: "You go to this institute, and the friendships that you make are forever," Ferris said.

The festival's debut collaboration with GIA represents the Potter sisters' desire to involve more Vermont artists and students in GPN. Both are alumnae of the two-week summer arts program. "It was really influential in both of our career paths," Charlotte said.

"[I was] honored with the Governor's Art Award [last fall], and it made me remember and take a journey to where it all started," Grace added. "And it all started when I was jealous that Charlotte got to go to the GIA."

Institute director Elizabeth Frascoia described the process of working with GPN as collaborative. Teachers and students drew guidance from provided questions: "How can we tie it to the place where the festival [happens]? How can we incorporate the native stories and traditions and culture?"

At a GIA morning meeting, Dow presented the Abenaki stories, which describe not only the geologic formation of Lake Champlain and the surrounding mountains, but the lake's Oodzee-Hozo (Rock Dunder), which protrudes from the water just a few miles from where the festival takes place. Dow added that her daughter was married "in the very field where the concert is going to be."

"What's happened with this," Dow said, "is it became a way to teach respect of somebody else's history [and] culture ... to share [through] a lot of different mediums."

As Grace put it, the collaboration is a way to celebrate and share the "energy and vitality that Vermont has pumping through it."