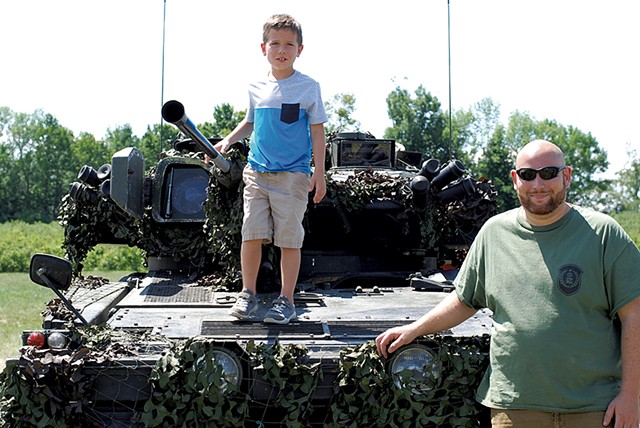 That tank you might have seen cruising through Charlotte over the weekend was not a mirage. Rather, the 1974 British CVRT Sabre was Derek Chace's vehicle of choice for a creemee run with his kids.

And it's Chace who feels like he's living a dream.

"What boy doesn't want a tank?" he exclaimed.

Chace and his wife, Cate, are longtime classic car enthusiasts and the owners of a car import business. The couple purchased the tank in June from a restoration specialist in England, adding the 16,000-pound vehicle to a collection that includes a 1964 Austin FX4 taxicab and a 1978 Land Rover ambulance. They paid $60,000 for the tank, including shipping.

The Sabre has been stripped of its shooting capabilities, but it has a barrel for show, with a propane-fueled firing simulator that flashes — just in case a director wants to use the tank in a movie. The hulking piece of metal is road legal, complete with license plates, blinkers and rubber pads on its treads, according to Chace. Unfortunately, it only gets four to six miles per gallon.

Chace gets stares and waves while driving it but has never run into any trouble.

"It's no different than any other classic car," he said. "It's just a little bigger."

Jovial and outgoing, Chace is eager to show off his prized possession. The tank has already appeared at the Shelburne Museum Classic Auto Festival and will be at the Vermont Antique and Classic Car Show in Waterbury from August 10 to 12. He's also offered rides to neighbors.

"A lot of people ask me if I can take it to their kids' birthday parties," Chace said with a laugh. "I'm like, 'I don't mind if your kids come here and see it.' I'm not sure how insurance would be if I show up with a tank at a kid's birthday party."

Correction, August 2, 2018: A previous version of this story contained a misspelling of Chace's name.