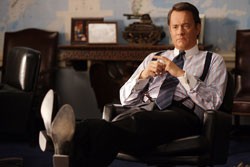 The road to hell, they say, is paved with good intentions. That chestnut could serve nicely as the tagline for Mike Nichols’ latest beltway romp. Charlie Wilson’s War tells the rollicking true story of a little-known Texas congressman who loved women, power, Scotch and drugs (not necessarily in that order), and who — between parties — brought down the Soviet empire.

Tom Hanks is all boozy good ol’ boy wit and Southern charm in the title role. I can’t remember the last time an actor looked like he was having this much fun on screen. Julia Roberts costars as Joanne Herring, a delightfully unlikely ally. A right-wing born-again Houston socialite with connections that boggle the mind, Herring arranges for Wilson to meet with the president of Pakistan and visit an Afghan refugee camp in the early 1980s. She wants him to see firsthand the sorts of atrocities that are being committed by invading Soviet forces.

The trip is an eye-opener for the politician, who sits on the Defense Appropriations Subcommittee. It gives him the cause of his career and leads to another unlikely alliance. Philip Seymour Hoffman gives as slyly comic a performance as he’s ever delivered in the role of Gust Avrakotos, a crude but street-smart CIA bureaucrat. Having just been passed over for the post of his dreams, Avrakotos hooks up with Wilson to “kill Russians” because, basically, he has nothing better to do.

The two actors have terrific chemistry and riff off each other like partners in a veteran comedy team. Good luck finding a funnier scene this season than the one in which the pair first meets in the congressman’s office, and it turns out the spy has bugged the bottle of single malt he presents to Wilson as an introductory gift. It’s a marvel of snappy dialogue and precision timing.

Without a word to Congress or the public about what he was up to, the real Wilson brokered back-door agreements among Egypt, Pakistan and Israel to supply Afghan mujahadeen rebels with weapons that couldn’t be traced back to the United States. When he took up the cause, the budget for CIA covert ops was $5 million. By the time the last Soviet soldier had retreated, Wilson had schmoozed and backslapped it up to a cool billion. Soon the Soviet Union was bankrupt, and the Cold War all but a thing of the past.

The film paints a picture of how things get done in the Capital that’s fascinating and frightening in equal measures. Who better to pen such a portrayal than Aaron Sorkin, whose credits include “The West Wing” and “Studio 60 on the Sunset Strip.” He was clearly born to write a great political comedy. Sorkin’s adaptation of George Crile’s 2003 bestseller is a thing of beauty.

Unlike most comedies, of course, this one doesn’t have a happy ending. Islamic jihad radicals, it turned out, had the last laugh. Though the U.S. supplied the mujahadeen with the firepower that liberated them, it all happened under the table. No one in the region knew they had the Americans to thank, and America did little or nothing to help the Afghan people get back on their feet in the wake of the war. The irony of this story is that the playboy congressman’s efforts eliminated the enemy we knew — while arming, training and emboldening another enemy the U.S. wouldn’t see coming until it was too late.

“We fucked up the endgame,” the real Charlie Wilson is quoted as saying at the close of the film. I guess that would make a pretty apt tagline, too.