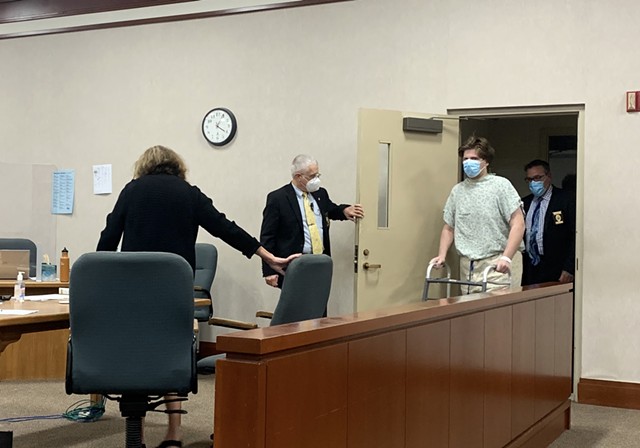 A Burlington man who was shot by a police officer over the weekend is now imprisoned on charges of aggravated assault, reckless endangerment and domestic assault for allegedly charging at officers while armed with a knife.

David Johnson, 20, appeared in Chittenden County Superior Court on Wednesday wearing a hospital gown and using a walker as he pleaded not guilty to the charges. His public defender told Judge Alison Arms that her client is mentally ill.

Authorities believe Johnson wanted police to kill him when he called 911 on Saturday afternoon and asked them to respond to an emergency at his Manhattan Drive home.

When three officers arrived, Johnson was standing on the sidewalk holding a large kitchen knife, according to an affidavit in the case filed by the Vermont State Police, the agency investigating the incident.

Officer Brock Marvin stood in the middle of the road and talked to Johnson for a little over four minutes, the court filing states. In a body-camera recording of the encounter, which has not been publicly released but is described in the affidavit, Johnson could be heard saying at one point, “I’m sorry Brock, I’m going to die today.”

Sgt. Simon Bombard asked another officer to get a “bean bag,” apparently referring to a type of nonlethal ammunition. “As Sergeant Bombard asks for this,” the affidavit states, Johnson charged at Marvin holding the kitchen knife. “Almost simultaneously,” police said, Marvin deployed a Taser at Johnson while Bombard fired his gun, hitting Johnson in the leg.

During an interview at the hospital later that day, Johnson told state police detectives that “he did not want to hurt anyone, he just wanted the police to kill him,” according to the affidavit. The Chittenden County State’s Attorney filed the felony aggravated assault charge against Johnson for running at Marvin with the knife. The reckless endangerment charge, a misdemeanor, accused Johnson of having “intentionally provoked police into shooting at him in a public place.”

In a separate press release, Vermont State Police said Bombard had fired his gun three times during the encounter. One of the shots hit Johnson in the upper left leg, a wound that led to his hospitalization. Another shot hit a police cruiser. The third, state police said, went through Marvin’s pant leg, “changed trajectory to an upward angle, ricocheted off the rear driver’s side of a parked SUV, and finally struck the windshield of a truck parked behind the SUV.”

New Details Emerge in Manhattan Drive Police Shooting
By Courtney Lamdin
News
After the shooting, photos circulated on social media of a vehicle windshield with a bullet hole near the driver’s side. State police said the driver received minor injuries from broken glass.

Johnson faces a third charge of misdemeanor domestic assault for allegedly punching his mother in the back two days earlier. His mother, who lived with Johnson at the Manhattan Drive home, had reported the incident to Burlington police on August 11, but the affidavit indicates that the charge stems from an interview she had with Vermont State Police following the August 13 shooting.

At Johnson's arraignment on Wednesday, deputy state’s attorney Eliza Novick-Smith asked the judge to hold Johnson in prison pending trial. His public defender, Stacie Johnson, said her client has “significant mental health issues.” He had been staying at the Brattleboro Retreat, an inpatient psychiatric and addiction hospital, in the spring, and had recently spent time in the University of Vermont Medical Center psychiatric unit, she said.

He has no criminal record, she said, and had been working full time in a shipping warehouse.

“I’m at a loss at this point as to where Mr. Johnson can go. But I’m very concerned about him going into jail,” the public defender said.

Arms ordered Johnson detained but said the decision was “preliminary” and said she would schedule an evidentiary hearing soon.