Charged With Felony for Growing Pot, Mother Can't Tell Jury It Was "Medical" 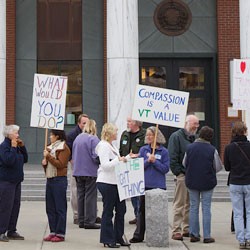 Like most Americans, Sue Thayer always assumed that when she got her day in court, she’d be free to explain her actions to a jury. On August 2, 2007, Thayer was arrested and charged with cultivating 30 marijuana plants on her family property in East Wallingford. That’s considered a felony in Vermont.

Thayer, a 65-year-old master gardener and mother of three with no prior criminal history, has never denied that she broke the law, only that she did so for a compelling reason: to save her son’s life. Max Thayer has suffered from chronic kidney failure since infancy, and in recent years has used marijuana his mother grew to cope with the symptoms of nausea, suppressed appetite and chronic wasting.

But when Thayer finally goes on trial in the coming months, she will have to defend herself without mentioning that key detail. Nor can Thayer say that Max’s older brother, Tristan, died of leukemia at age 25. A botany and molecular genetics major at the University of Vermont, Tristan also used marijuana to relieve the pain and nausea resulting from his repeated rounds of chemotherapy and stem-cell transplants.

“It’s only fair for us to be able to tell the jury what happened,” Sue Thayer says. “How can they decide when they don’t even know the facts?”

Prosecutors don’t dispute those facts, but the judge has ruled them inadmissible. On August 20, a sharply divided Vermont Supreme Court ruled three to two that a jury cannot consider Thayer’s plea for a “necessity defense” — that she broke the law in order to prevent what is called in legal parlance an “imminent and compelling emergency” of “sufficient seriousness to outmeasure the criminal wrong.”

According to the high court, Thayer failed to meet one of four legal hurdles for bringing forward a necessity defense: that she had no other reasonable recourse but to violate the law.

Neither brother was on Vermont’s medical-marijuana registry, first enacted in 2004, at the time of their illnesses. Tristan Thayer was diagnosed with leukemia in 2002, prior to the law’s passage, and died three years later. In Max’s case, Vermont’s medical-marijuana statute didn’t cover chronic kidney failure until July 1, 2007 — just 33 days before his mother’s arrest — when the legislature expanded the statute to cover more ailments.

Now 22, Max has suffered medical ailments since he was 28 days old. While being nursed by his mother as a newborn, he began bleeding internally and stopped breathing, which permanently scarred his kidneys. Max spent a week in the intensive-care unit.

Over the next two decades, he suffered the degenerative effects of chronic renal failure, including nausea, loss of appetite and fatigue. He missed a lot of high school, underwent frequent dialysis and nearly flunked out his senior year.

“As a mother, it was really hard to see him sick all those years,” Thayer recalls. “He always went to school late, he couldn’t get up, and he never felt well.”

Shortly before Tristan died, in May 2005, he recommended Max try cannabis. And, since their mother was an accomplished gardener, it seemed only natural that she’d cultivate the plants outdoors.

Under Vermont law, all medicinal cannabis plants must be grown inside, under grow lights and behind locked doors. Although patients on the state registry are allowed to grow, possess and consume cannabis, the law is silent on where the seeds or plants can come from.

Max explains that his mother has no desire to turn to the black market for his medicine, or to grow her plants indoors — a costly and time-consuming process that typically requires the use of not just lights but chemicals and expensive equipment. And, with Tristan dying, he says, that was time the family didn’t have.

“So, she grew it outside because that’s how she knew how to do it,” Max says. “It was the only logical solution at the time.”

Each summer, Thayer planted 50 to 100 plants in a discreet location on their 100-acre property, which borders the Green Mountain National Forest. Thayer cultivated 50 to 70 percent more plants than she needed to compensate for losses due to frost, drought, excessive rain, deer, woodchucks, mold and disease, according to court records.

Max says that once he began using cannabis, the results were phenomenal: His nausea subsided, his appetite returned, and he felt better overall. That year, he excelled in school. The marijuana didn’t cure his illness, but it greatly improved his quality of life — as it had for his brother.

On April 4, Max received a kidney transplant, and now reports he’s getting along “fabulously.” Still, he can’t understand why the state has spent three years and many thousands of dollars trying his mother for what he considers a victimless crime.

Max isn’t the only one to rally to his mother’s defense. Several dozen friends and neighbors from the Wallingford area recently formed a group called “Friends of Sue Thayer” to draw attention to her case. On Monday, about 50 supporters held an “informational picket” outside the Rutland District and Family Courthouse before a status conference on the case.

Carol Ann Martin of Wallingford, who launched the group and its Facebook page, says Thayer’s case really struck a chord with her and many of her friends.

“Most people think they have an inalienable right to speak in their own defense,” she says. “When you tell people that she can’t say a thing about Tristan or Max, they can’t wrap their mind around it, that this is happening in America, and in Vermont.”

In a sharply worded dissent to the Vermont Supreme Court ruling, Chief Justice Paul Reiber took issue with the majority opinion, questioning how the trial court could reach the conclusion that a child’s kidney failure, and the chronic wasting disease that accompanies it, is anything but an emergency that warrants consideration of a necessity defense.

“I worry that [this] ruling will lead to a trial where [the] defendant’s actions will be viewed in a vacuum and where she will be treated as a run-of-the-mill drug possessor,” Reiber wrote, “when, in fact … she is a loving mother who simply wishes to provide her son with the best possible medical treatment available to avoid losing him like she lost her first son.”

If convicted, Thayer faces a felony conviction, a five- to 15-year prison sentence and a fine up to $500,000. Nevertheless, she’s unapologetic about growing marijuana for her son and sounds unwilling to accept a deal to plead guilty in exchange for three to five years’ probation and supervision by the Department of Corrections.

“I wasn’t guilty of doing anything but helping my son,” Thayer says. “It sounds strange to say, but if [Tristan’s] life was only going to be 25 years, we got the last three. And we got them completely.”